A bit of International Media....

So, historically our sport has been, and continues to be a bigger deal overseas. Case in point, yesterday I was looking over someone's shoulder on the Finn Air flight and there were huge pictures of the Finnish skiers in the newspaper. I was dying to know what the article said.... we certainly miss out on a lot not being able to speak German, Swedish or Norwegian. But, we are starting to turn a couple heads and have done a handful of Interviews with the International Media.  The women's team strong start to the season has gotten a lot of attention and everyone is trying to figure out what our secret is!

Take this cartoon - on the FIS website this morning! 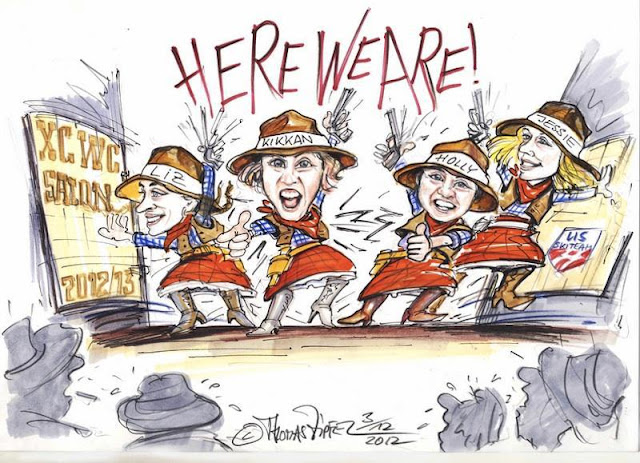 We also had an interview in the Swedish media....
http://blogs.fasterskier.com/worldcup/2012/12/03/u-s-women-featured-in-swedish-newspaper/

It's hard to see on the Fasterskier site but here in the hilarious "google translated" version with some PRICELESS quotes!  Now.... about that "Obese Sponsorship!"

They belong to one of the world's best
national team.
But at home in the U.S., they are totally
unknown.
Now working Kikkan Randall, Liz
Stephen and the other American women
very hard to spread
skiing in North America.
At the same suit that
Norrbotten thanks for all the help on
road.
- Charlotte Kalla is absolutely wonderful,
She is so incredibly helpful,
they say to NSD.
Sunday 25 november. Women's relay
in Gällivare VC premiere is on
way to get a resolution.
Marit Bjørgen takes little unexpected Norway
Case first. Then Charlotte
Call in second spot for Sweden.
But behind it is a hard
battle for third place. Jessica Diggins
against Marthe Kristoffersen, USA
against Norway 2.
Diggins know several times how
dryer disappears and the legs fold
itself. But the 21-year-old from Minnesota
refuses to give up. She knows she can
write history. And she does.
This is the first time a U.S.
women's team stands on the podium in the relay race
a World Cup.
And lyckotårarna runs.
"Love Kalles caviar"
Sunday, December 2. Kikkan
Randall and Liz Stephen has just
come home to her cottage situated
a few hundred meters from the ski stadium
Ruka in Kuusamo outside. They are worn
after a tough weekend and planning a quiet
evening. Maybe a nice dinner and some
good TV series. Modern Family and
Grey's Anatomy belong to the favorites.
- And so it will be some spicy food.
We have a strong season from home,
that's probably what they miss most
Here in Europe, says Kikkan Randall.
- But there are very good here. I
love Kalles caviar. I can eat
much anywhere and I do not
have no bread, says Liz Stephen
and laughs.
U.S. women have had a dream start
the ski season.
Kikkan Randall, which is the seasoned
"Big sister" of the team, was third
ten-kilometer charge in Gällivare last
weekend. In Kuusamo, she came second in the
five kilometers freely and fifth overall
on the mini tour.
Holly Brooks was fifth in Gällivare
Liz Stephen finished second in rehearsal in Muonio,
Jessica Diggins twelfth of five kilometers
freely in Kuusamo ...
But what strikes maximum - for them
all - is this the third spot on the relay
in Gällivare.
- It was absolutely fantastic, it beats everything
other things I've done as a skier, says
Kikkan Randall inter alia
has a World Championship silver in the sprint from Liberec
2009th
- But this was better, just getting
do it together with the other
girls.
Living in suitcase
At home in the U.S. is not cross-country
any major sport. And the U.S.
riders far from some celebrities.
- Could we win a race on the World Cup
we will be happy if it comes
a notice in the newspaper. For a OSguld
maybe we could get a picture as well,
says Randall.
- But now the races on any
kind of website online anyway. My
parents sat in front of the computer at half
three in the night, says Liz Stephen.
American Ornamental live their lives in
portmanteau. The majority of the year, they are on
traveling in Europe, Asia and North America.
They'll rarely home between
races. Nor do they have any
high wages or obese sponsorship agreement that
boast.
- It's part of the job to be out and
pick up different sponsors. But we are lucky
Nevertheless, the girls in the B team may pay all
their trips themselves. Imagine having to sit
and worrying about whether you can afford to
stay in Europe for another week, says
Stephen.
- And we have great fun together
the team. Otherwise, it would probably
been harder to travel so much. Now
we have each other and we are like a big
Family says Randall.
The American
girls are working very hard
to launch
the sport at home.
They go around
in schools, lecture
and preaches skiing.
The hope
is that little girls
across the U.S.
to open their eyes
for skiing.
- I got an email
from a man to a
while ago who told me he dragged
up her four-year daughter in the middle of
night to watch a ski race
on the internet, when I was happy, says
Randall and laughs.
What are the secrets behind
the U.S. ski revolution?
There are many factors that play
in. One is cooperation with Sweden
in general - and Norrbotten
in particular.
The American girls have
been to Sweden several times and
trained with Charlotte Kalla and
the other Swedish national team.
They have a wax head from Koskullskulle
and is tight with Sweden
coach Lars Oberg
from Kalix.
- To get to train with Swedes
has been fantastic. Charlotte
is absolutely wonderful. A little shy
at first, but once you learn
know her, she is really funny,
says Liz Stephen and continues.
- And she is incredibly helpful.
There are no secrets
where not, we have learned a lot.
No confusion
Kikkan Randall also salute
herd manager Peter Johansson.
- He is amazing, I have
always good skiing when I compete.
We have had many great robbers before,
but as soon as they have done
progress with us as they leave
U.S. to any other country. It
's great that Peter believes in us
and want to be left behind.
Randall also had Lars Oberg
the wax head of U.S. 2002nd
- It's fun to see him out here
among paths. It appears
that it goes well for him
captain of Sweden.
Kikkan Randall and Liz Stephen
decides
to, via NSD
send a thank you
throughout Norrbotten.
- We s s t units
the "thank you
much, "said
Kikkan Randall
and start writing.
One need
not just write

We've touched down in Quebec City after four flights and nearly 24 hours of travel. There's no snow here in QC but I'm excited for this morning's exploratory run! More soon. Thanks for reading!
Cheers,
Holly :)
Posted by Holly Brooks at 7:11 AM