Kikkan skied a great first leg of the 4x5k relay yesterday. She tagged off in fourth place after skiing a super strong race.  I started out hard but there wasn't a whole lot I could do to maintain the pace or our team’s fourth place position.  There were some very strong second leg skiers that I was up against including Justyna K, the current World Cup leader from Poland. 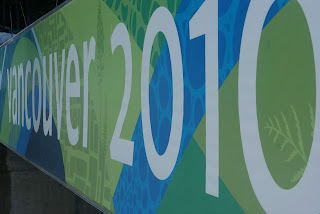 Yesterday’s race was also the 14th day of the Olympics and my fourth race here.  The Olympics are starting to take their toll on me on me and as it turns out, I am very, very tired.  In the past two races I haven’t felt like I can “charge and recover” like I’m used too.  If I ski an uphill to hard, that’s it. My legs fill with lactic acid and I’m not able to ski like I know I can. Looking back at yesterday’s 5k I think there were times when I skied my warm up faster than the actual race itself.  This is obviously no good.
Most athletes here at the Olympics planned their training to “peak” during the Games meaning, they organized their training so that they would ski faster here than they have all year.  This was not a possibility for me due to my late decision to even make the team. I came into the 2009/2010 season with very few “points races” that would qualify me for the US team. Therefore, I had to ski fast from the go starting in November 2009.  I skied fast in the early season to get my name in the mix and had to hold it with good performances in January at US Nationals. In hindsight, the situation I put myself in forced me to ski fast all year. Now it’s February and in some ways, “I’m out of training.”  Erik Flora, my coach used a dart analogy to describe it, “You had to use lots of your darts for qualifying races – you used them in November, December, and January.  At some point, you just run out of darts.”
You can also think of training like money in the bank.  In the summer and fall months, you put in hours and they mature like a good investment.  In the winter, you are forced to take them out to perform.  If you have to withdraw too much too early, you are left with a zero balance at the end.  This summer, after I decided that I wanted to make the Olympic team I was forced to take two months away from training due to my Mt. Marathon Exertional Rhabdomyolsis injury.  Unfortunately that was two months were I wasn’t putting much-needed “money in the bank.”  In many ways, that (“my lack of base”) is hurting me now when I want or need it most.
In many ways I have fewer responsibilities here than I do at home. I am not coaching sessions, I have someone that makes my bed and takes out the garbage (!) but there are so many other components of the games that take time, energy, and focus.  Coming into the Games I waffled back and forth about how many races to attempt. Basically, when it comes down to it, I thought I could do more than it turns out I can.  I had been looking forward to the 30k race more than any other race here at the Games and now my participation in that is questionable.
Sometimes I've been known to be loyal to a fault.  Part of me was/is tempted to ski the 30k mass start just because I know that tons of friends and family came here to watch me ski it.  But, I know that is the wrong reason to start a race.... I can't make something out of nothing, especially an Olympic 30k.  It's not a matter of “just trying harder” or “digging deeper.”  It’s not something that can be fixed with a 15-hour night of sleep like a sore throat. I’m out of energy and the tank is empty. I feel horrible because I know that people have put a lot into their plans to watch and support me….. to everyone that made sacrifices and plans to be here to watch me ski I’m am VERY VERY SORRY.  I wish there was something that I could say or do - I just didn’t know.
So - chances are I will be watching the 30k from the sidelines. I hope that friends and family will accept this and if so, I look forward to seeing all of you tomorrow. 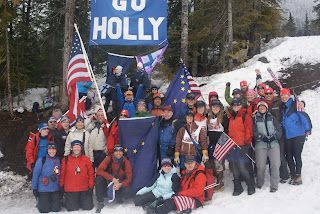 (This is only a fraction of the people that were out there cheering me on yesterday - thanks you guys!)
Sincerely,
Holly
ps. APU juniors: Kick butt and have fun at the second day of State today - I'm proud of you guys!
Posted by Holly Brooks at 11:10 AM 3 comments: