WHEW!  The Olympics are over. The flame is out. No more athlete cafeteria.... needing my credential everywhere I go, coach shuttle buses for transport..... walking around feeling like Captain America (Team USA uniforms) randomly running into Petter Northug, etc, etc.  Life after the Olympics includes freedom to move around on your own, eat meals out of sight from Ronald McDonald, and the necessity of a wallet (!) 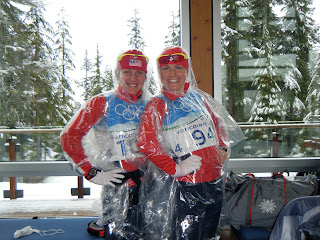 (We considered skiing in these ponchos that they gave us because it was POURING rain - this was the morning of the 30k!)
Yesterday was hectic.  Think moving out of a college dorm - huge mess and not enough time to properly say goodbye to anyone.  To make matters worse my big ski bag was lost in the hectic jumble of everything so I had 23 pairs of skis and no bag :(  Athletes flying out of Vancouver scored with an automatic luggage check in INSIDE the village.  But, I'm flying out of Seattle so I had to "schlep" my bags around and get them to my parents who drove them to their house. After "moving out" we took a shuttle to the Vancouver athlete village just in time to see the US/Canadian Hockey final.  Although I'm always rooting for the US, the benefit of Canada winning the Gold was that everyone was in a good mood for closing ceremonies. 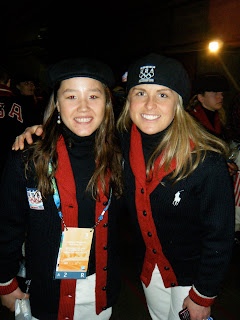 I hung out with Callan (Snowboarder from Girdwood) during the Closing ceremonies wait... 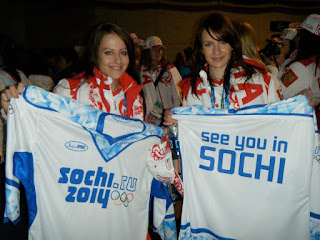 Ran into the Russian Curlers who are already excited for 2014! 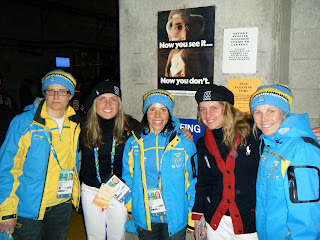 Took some pictures with the Swedish women including Kalla, the 10k skate Olympic Champion (in the center.)  I'm totally psyched because I traded a bunch of my USA gear for some Swedish Gear.... after all, I am 1/4 Swedish! 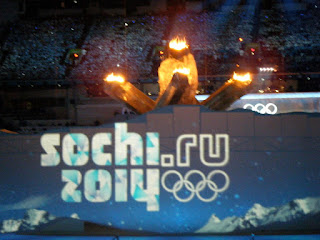 A big part of the Closing Ceremonies is the "hand-off" from the Olympics that just ended to the Olympics of the future.  The presentation was a bit eclectic and I'm not sure that I left knowing anything about Sochi? 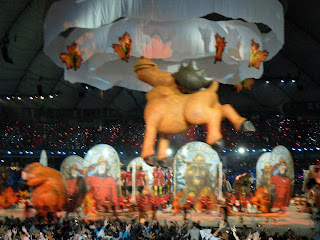 The finale to the ceremonies was a bunch of "big-dollar" moose blow-up floats, Canadian "Mounties" and Hockey Players.  There was some stand-up comedy that totally flopped.... lots of Inside Canadian jokes that they didn't even laugh at (the person sitting next to me actually said, "I think I can hear crickets chirping") and some really, really bad performances by Avril L and Alanis M. All in all, I honestly thought the Closing ceremonies were a let down.  There was a bit of redundancy with the Opening Ceremonies but only this time, everyone was tired and we felt like we had seen it before. 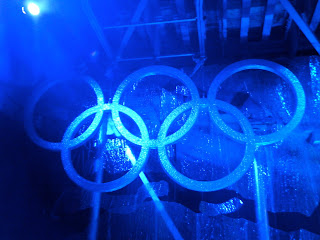 I have a lot more that I want to say, stories that I want to tell, people that I want to thank but right now I need to make the most of my precious time in Seattle. I have a couple hours to visit with my grandmother and great Aunt. I will write more tomorrow on the plane en route to Anchorage!
~Holly :)
Posted by Holly Brooks at 3:04 PM No comments: