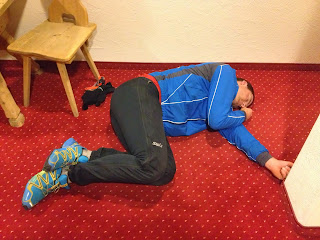 He has severe jet lag. You may be wondering why? When I sat down this spring & summer I thought it would be great to spend Christmas in the US. I'd get a training break, an altitude block (in PC) and eat Mexican food at Cafe Rio everyday. I had it all planned out. Until everything changed of course. Such is the life of a skier. 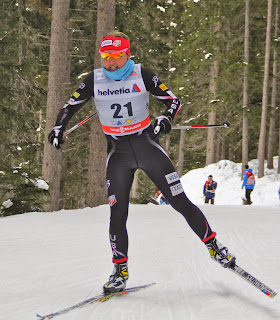 One of the disadvantages of living so far away from the World Cup is that we're made to forecast our plans way in advance. We buy plane tickets without knowing what kind of race shape we'll be in. We try to guess how the season will unfold and plan accordingly.  Had the first couple weekends of the World Cup gone spectacularly I would have been happy as a clam to climb onto a plane and jump time zones.  But, at this point I feel that my body needs more time to come around and more opportunities to race. Had I gone "home" to Utah that would leave with me with just three race weekends before the Olympics and only a few guaranteed starts.  When it came time to make a decision I decided that I work too hard in the off season to not give myself the best opportunity possible to bring home some good results. Hence, the last minute scramble of my ticket change, Rob's ticket change, last minute accommodations over Christmas in Switzerland, etc, etc. 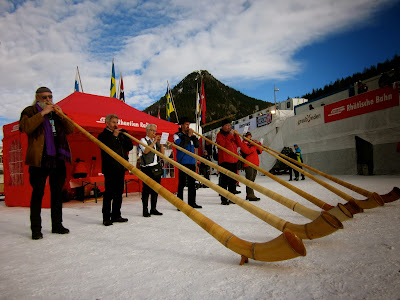 It wouldn't be Switzerland without the long Alps Horns

The Tour de Ski has always been a fickle event for me. Two years ago I simply didn't get on the plane home from Slovenia back to Alaska.... I changed my plans last minute because I was racing well and the USST (which I was not yet a member of) invited me to start the Tour.  All of this only for me to fall on the ice Christmas Eve & break my wrist. While I didn't know it was officially broken until halfway through the Tour I finished all 9 stages/11 days much to my demise.

Last year I completed the Tour for a second time, bones fully intact. But rather than give me a boost in fitness which is what we hoped for I felt as if it tanked me for the entire middle part of the season, World Champs included.

So, I'm crossing my fingers that the Third time will be a charm!  I'm hoping that my slower start will lead to a strong mid-season. I've also cut out all travel (No trips to Canada or the US). I'm taking this upcoming race weekend in Asiago, Italy off to use it for rest & a training block. My initial plan is to complete only the first FOUR stages of the Tour which covers two stops first in Oberhof, Germany followed by Lenzerheide, Switzerland.

What about the races this past weekend? Well, the distance race was so so. I was 25th which isn't too shabby but considering it's one of my favorite races I was hoping for more. But, it's a move in the right direction.  On Sunday I was bummed to miss the heats by .4 seconds - I finished in 33rd place just over 4 seconds behind Denise Hermann, the winner of qualification.  I'm not entirely sure but I think that this might go down in the books as one of the tightest women's sprint qualifications ever!  Two years ago when we raced the same course in similar conditions the spread was 9 seconds! (Come up with your favorite theory for this one....)

There's plenty more to say and tons more pictures to post but in the meantime I'll leave you with just a few as it's time to go to bed! 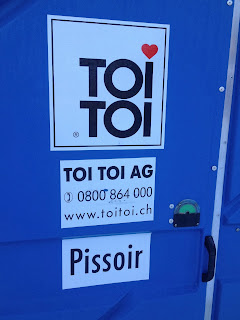 Not a huge fan of some of the facilities here.... this "outhouse" featured two literal "troughs" for going to the bathroom. I think it could accommodate 6 people at one time. 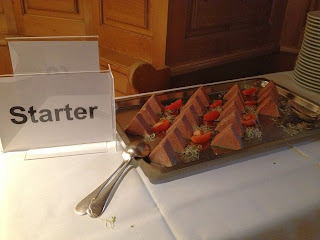 When in Switzerland eat a pate mountain! 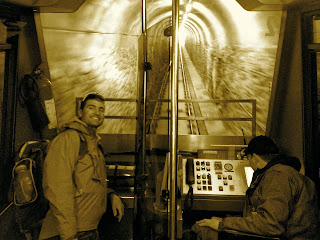 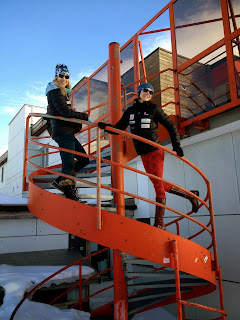 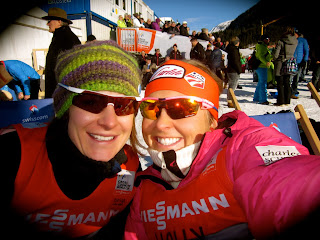 Watching the sprint heats with Dash

Last but not least a special thanks to Erik Flora for making the trip over to Davos to see us. It's really really nice to have your personal coach around. Getting to ski & having him be able to watch actual energy levels rather than just talking on skype was awesome. 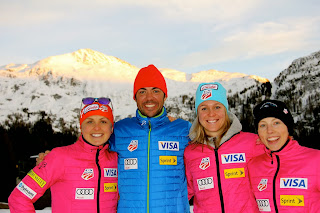