Snoqualmie snow and catch up!

Oh boy.... so much has happened in the last two days. Its gone by fast but 48 hours ago also seems like an eternity.  One reason I've been delayed is because my CAMERA BROKE!  So, instead of blogging earlier, I had to take the entire afternoon to go on a camera hunt into the Whistler village. BINGO. I got one.  (Can you really think of a more inopportune time to have your camera break - the DAY before the opening ceremonies of the Olympics?!) 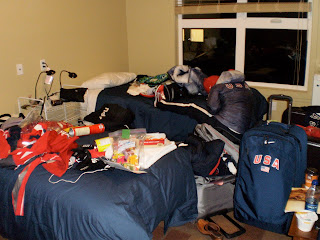 This is our room. We had six HUGE duffle bags to unpack. It's a huge mess - and absolutely no storage space.  In many ways, I really feel like moving into the athlete village is like going back to college. You have a roommate (actually, she's "hidden" in this picture - can you see her? It's not Where's Waldo - it's Where's Caitlin?!)
The skiing here has been fun. It makes me wish that I had some Whistler-specific training camps back at Snoqualmie Pass where I grew up skiing! Both days during training it's been 34 degrees and snowing hard. I actually talked to Rob about brining my extra tuff rubber boots from home. The snow flakes are dime-size huge and if you want to have a huge snowball fight, you would be in heaven. There are tons of "course volunteers" out on the trails and one was "marshalling" next to a gigantic snowman today. (I would have gotten a pic for you guys if my camera had been working!) 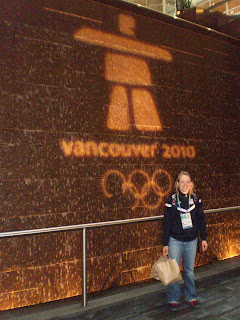 (My teammate, Liz in front of a Vancouver sign pre-press conference yesterday)
Today for training I skied on my "zero" skis. For those that aren't familiar, think of it as a new-age waxless racing ski.  They are particularly good in conditions like we are experiencing here - 32 degrees and snowing. I had heard a rumor that Kris Freeman owns 27 pairs of this partiular kind of ski. I tried to confirm it on the bus ride back from the venue today but he, "didn't really know...."  It's takes a lot of skis to be a competitive ski racer!  Also, as a side note - Kris was on the Today show the other day. If you haven't checked it out, here is the link:
http://today.msnbc.msn.com/id/26184891/vp/35329776#35329776
It's always great to see our sport bust into the mainstream media! 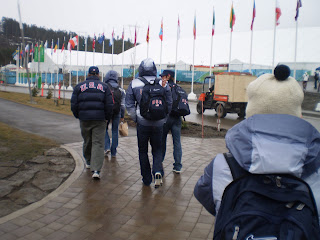 (Here is our team walking into the athlete village. It's been grey and pretty rainy but lucky the atmosphere is so good that it doesn't really seem to matter. Lots of the buildings are temporary white tents - the kind you would see at a wedding but only a LOT bigger. 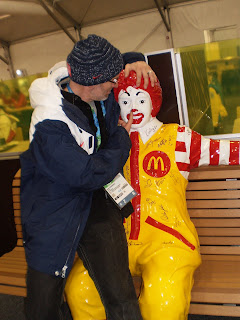 McDonalds is an official sponsor of the Games and there is a full-fledged restaurant inside each athlete village dining facility. Ronald McDonald sits on this bench 24 hours a day, everyday. Apparently, McDonalds took their top 300 employees from all over the country and brought them here to work as part of an incentive program. So far, I've been really impressed by the food. They have a huge variety
and it's pretty good. No complaints. 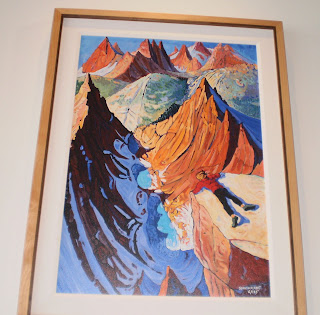 I was also really fired up to see one of Sean McCabe's painting in the athlete lodge at the venue. For those that don't know, Sean was a nordic skier/teacher/mountains enthusist from Winthrop WA that recently passed away from cancer. He has some amazing paintings, many of which are skiers. Check out his website here:
http://www.seanmccabestudio.com/index4.html
The other thing that's worth mentioning today is that our entire team went to drug testing. This time we had our blood drawn to check our hemoglobin levels. (Hemoglobin is the protein molecule in red blood cells that carries oxygen from the lungs to the body's tissues and returns carbon dioxide from the tissues to the lungs.)  Sometimes high numbers indicate evidence of doping but sometimes levels are high because of dehydration, lots of time at altitude, etc, etc. The coaches had our whole team POUNDING the water and gaterade to avoid any suspentions. If your numbers are found to be high you get an automatic 5 day suspention and are subject to further tests. We can also be testing at ANY time during the day for both urine and/or blood. We turn in extensive "whereabouts" filings that basically tell anti-doping folks where they can find us at all times so they can do surprise tests. Testing is great and helps us protect the integrity of the sport.
Okay, more good pictures to come tomorrow. It will be a busy day between training and attending the opening ceremonies. The ceremonies are a 10-12 hour commitment for those staying up here in Whistler. Lots of driving and lots of standing around. But, I'm REALLY looking forward to it.
Talk soon/thanks for reading!
~Holly :)
ps. Thanks so much to Kaladi... apparently an AK coffee care package is on the way. Thank you to Gina Romero (wife of a co-worker or Rob's) who read our coffee worries and put a plan into action!  THANKS!  BIGTIME!!
Posted by Holly Brooks at 10:49 PM 2 comments: