I have to say, I am pretty psyched about my first World Cup experience. 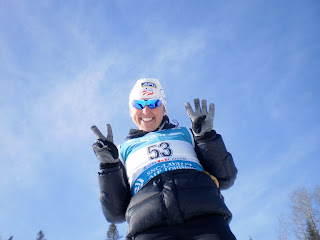 Last night I wrote this in my journal, "There are 66 girls starting the race tomorrow, many of whom are seasoned veterans. It's hard to make numerical goals but it would be cool to be top 40, amazing, the be top 35, and virtually unheard of to score World Cup points and finish in the top 30."  Well, I did it - in my World Cup debut, I finished with a strong 24th place, only 46 seconds out of 10th place! 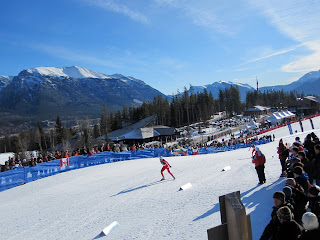 (Thanks to Ronsse for this racing pic - it's the only one I have so far but I will post more when and if I get them!)
After any racing experience I ask the kids that I coach to analyze their race - what are three things that went well, and three things that could be improved upon next time?  Well, I suppose that I should practice what I preach and do the same thing!  Here it is:
Things that went well:
1. My mental game was strong.  I didn't let myself become too intimidated..... somehow I wasn't that nervous at all which is somewhat surprising.  It's just another "race" right?
2. I've been working on my V1 technique and I think I was able to execute it more than I have in other races.... it helps when there are tons of big climbs and opportunities to work on it!
3. All of the racing "logistics" were smooth.  Breakfast, 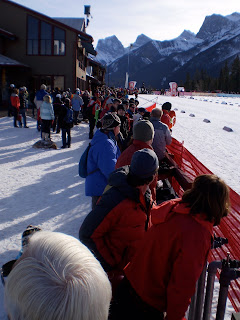 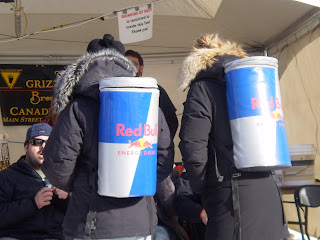 Even the Red Bull girls showed up to the World Cup in Canmore! 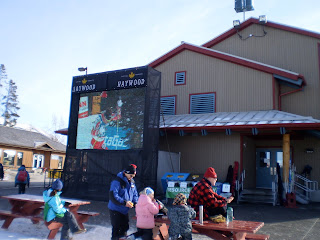 Here is a picture of the big screen that they used for the event. On one of the downhills a video camera on a 25-foot boom swung out and I thought I was going to crash into it!  Also, the announcer told the crowd that the race was being shown (live in most places) to 100 MILLION viewers all throughout the world. That's not 100, not one million but 100 MILLION!  It makes you wonder, "Do I have anything in my teeth?"
If you are curious about other pictures, Phil Bowen is here taking pictures of the US Skiers - his shots are phenomenal. Check out the link here.  I'm number 23 with white Salomon boots and skis..... Thanks Phil for being out on course!
And, Erik Mundahl found this CBC Sports link of the women's race.  It's a full ONE HOUR long!  the link is:
I'm racing the classic sprint tomorrow.  I'm crossing my fingers that I can qualify top 30 and make it to the heats!  We'll see!
Thanks for reading - Sincerely, Holly
Posted by Holly Brooks at 4:33 PM 2 comments: