Sorry for the absence of a Sunday blog. I guess I needed a day off!

I just got back from the venue after watching the team sprint. I was able to watch the finals from the grandstand which was a new, fun experience. Congrats to Germany and Norway that both skied gutsy races and took home gold medals. Also congrats to both the men's and women's USA teams who skied solid races in the finals after moving on from the semis. I had a great classic ski through the "rec" trails this morning after going back for a "second round" of klister. 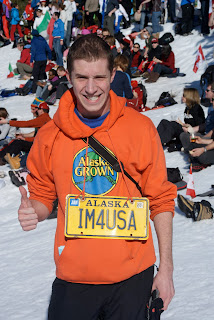 (Check out this AK fan!)
Perhaps my greatest realization from my Olympic experience is the realization that the best skiers in the world (Olympic Champions, World Champions) are real people; they have good day, they have bad days.  Sometimes they make mistakes, and other times, they pull off miracles.  Here is a list of things that I've seen that have brought me to this realization: 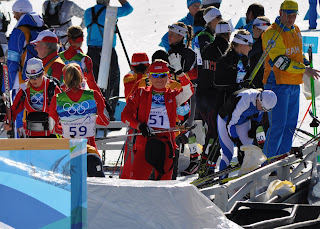 (waving at the camera before my start the other day)
*The gold medal favorite today, the Swedish men, fell on a fairly straight-forward hill in the semi-finals and didn't even make it to the final.

*Bjorgen may seem unstoppable but she needs a day off too - and sits this race to rest up for the rest of the games.

*Someone watched Tobias Angerer eat THREE Big Macs before winning a silver medal in the men's 30k pursuit.  (Virpi has been seen eating them too)

*Astrid Jacobsen of Norway was still crying after the men's final because of her sub-par (for Norway) performance in the team sprint.

*Team Belarus was having an awesome race in the semi-finals, neared the finish in second place and accidentally took the LAP lane instead of the finish lane - that happens EVEN at the Olympics - opps.

*The strong Finnish women's team has yet to bring home a single medal from any cross country event.

*I saw Charlotte Kalla struggle to get in a fifth pull-up in the weight room!?!

*Even super-star Northug finishes races outside the top 40.....

*Ola Vigen Hattestad, one of the best sprinters in the world didn't start today for Norway due to a sore throat.

I'm not suggesting that we all start eating Big Macs or snow plow rather than step turn but it's great to realize that these guys are human, they aren't untouchable, and that someday, hopefully sooner rather than later we will be winning medals too.

Here are a couple more pictures to end the post with: 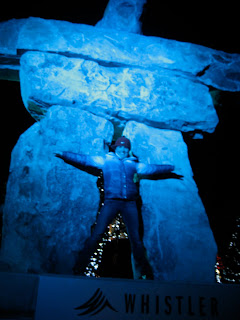 In the Whistler Village.... 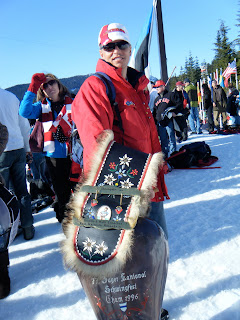 Check out this BELL! 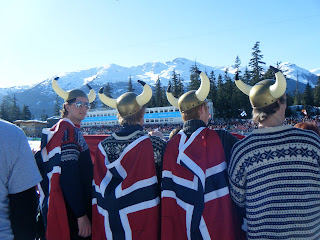 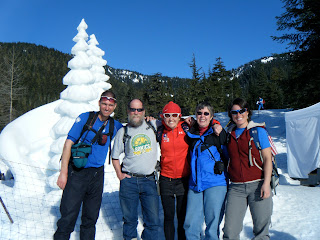 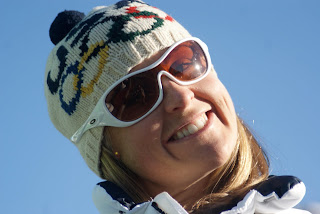 I thought I would end with a blue-sky post as the weather is supposed to take a turn for the worse here in a couple of days...... Thanks so much for all the wonderful cheering and kind words of encouragement. You are all great.
Thanks for reading - more to come soon!
~Holly :)
Posted by Holly Brooks at 4:06 PM 1 comment: