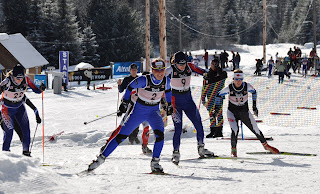 I'm laying on the couch right now with my legs elevated after just finishing the Teck Skate Sprint in Rossland.  The first day of the mini tour is over, only two more days of racing in this period before headed back to Alaska to my own bed, my cat, and some well deserved R&R.

Today was a fun race on a technical and tactical course.  The prelim only took us three minutes - too short for my liking but the margin between me and Sadie today was even smaller than last weekend in Silver Star (.05 versus .1)  How many ways can YOU think of to make up .05 seconds!?! 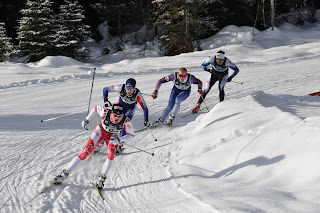 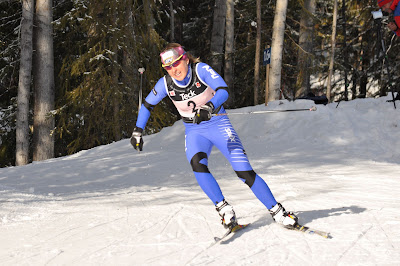 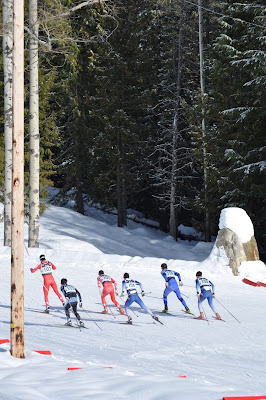 The scenic shot.... (thanks to my husband Rob for all the great photos!) 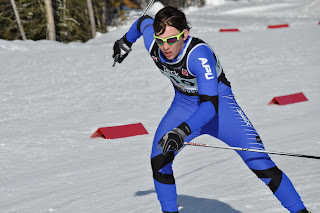 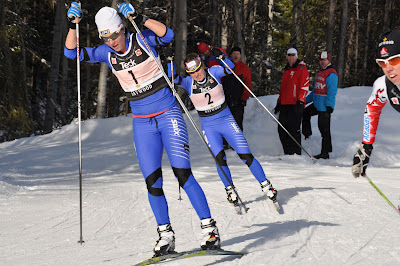 The women's A final coming off the technical "S" turn
Anyways, today's race was a big deal for the Canadians.  The Canadian winner of each skate sprint "stamped" their ticket to compete at World Championships in Oslo, Norway!  While I'm glad that we don't use the "perform or else" qualification system I'm sure it feels nice to know Championship plans now rather than having to wait until mid January like we have to in the US. 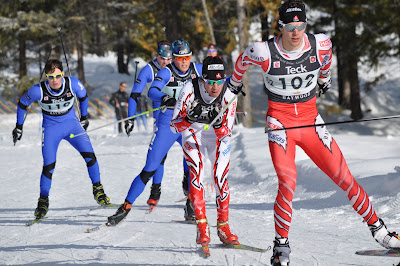 Today's course featured a huge hill at the beginning of the race.  We bottle-necked early and I was basically in third place the entire race.  Each attempt to pass proved unsuccessful.  We navigated a gnarly turn which saw some pretty good wipe outs earlier in the day and headed in for the final stretch.  I had good cornering and decent finishing speed. I came from behind to lunge for second place with Perianne Jones!  After mulling around for a while I found the jury hovering over the finish camera debating the timing picture inside and out.  No one could really tell who was second, and who was third.  The final call was TIE! 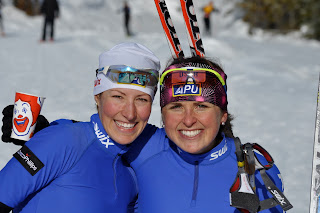 With teammate (& roommate!) Katie Ronsse who rocked the B final!

Perhaps the best quote of the day goes to Perianne when she said that she looked over at my suit color after we crossed the line was relieved to see that was an American rather than a Canadian.  Imagine the debacle that would create if two Canadians tied, the "prize" being a trip to World Champs?!  We were disappointed to find out that there wasn't a "2" bib for the podium.... the plan to both squish into it was foiled! 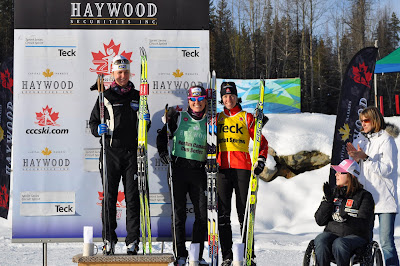 Sharing the podium with Peri (I'm in green) 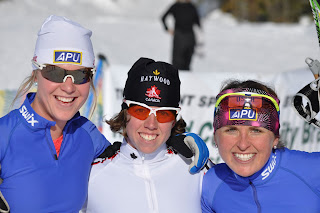 Rewinding to the distance race last weekend at Soveregin Lakes....... I had a great day!  The course suited my strengths well - slow snow and lots of climbing.  The suffering factor was high and I love it when it hurts!  Erik described racing at altitude according to Bill Koch: "It's like reaching for that branch that is just SLIGHTLY out of reach and trying to hold on."  That's basically what it felt like and I was happy to come out of it with a NorAm victory! 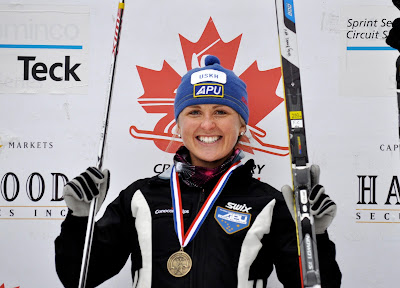 Top of the podium at Sovereign! 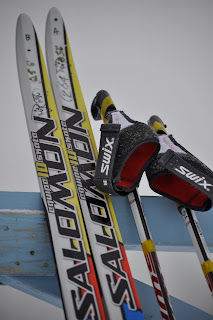 We've been on the road for 28 days now and this is the final stretch!  Tomorrow's race is a 5k skate and Sunday's is a 10k classic "hunting" start.  Basically, all of the race times over the three days will be added up. Additional bonuses will be given for sprint performances.  Sunday's start will be rolling pursuit style and then it's the first person to cross the line wins!

Last but certainly NOT least, my teammate, Reese Hanneman (who also had an awesome day today finishing 10th overall amongst a stacked men's field) made another great "Engine Room" productions video.  Check it out here:

Stay tuned for progress and details!
Thanks for reading,
Holly

ps. Special "thanks" to my husband Rob for taking hundreds of awesome pictures the last couple races. Sometimes I think he's getting as good of a sprint workout as we are - making it to all parts of the course.  It's great to have him out there cheering and hooking up everyone with FABULOUS photos.  Thanks Rob! 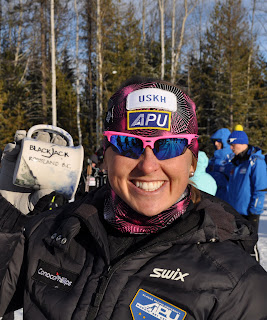 With my homemade Black Jack coffee receptical!
Posted by Holly Brooks at 6:54 PM No comments: