So..... I have raccoon eyes from Presque Isle Maine - who would have thought?  For those en route, bring your sunscreen and klister skis not to mention crust cruising skis because it's good!

It's been great putting the "coach hat" back on for the week.  It adds good balance to my life as a skier and I absolutely love working with the kids. Its funny to see the same nervousness that I experienced just two weeks ago at the Olympics (myself) in them now. It really brings the experience full circle. All in all, they did a great job and I'm really proud of each and every one of them. 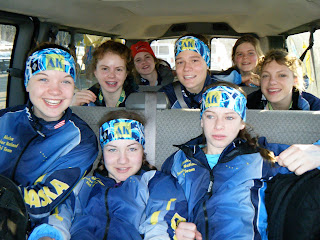 Awesome J2 girls in the van pre-race :)
Today was the third of three races and APU juniors had some stellar results - both with places and learning experiences. For some of them, it's their first time at a National-level race and it was hard to come into the experience with specific goals beyond "making the team."  I can relate to this with my first world cup and Olympics. I didn't know what to expect or where I would fall in the pack. I only hope that the experience has been positive for them and that it will motivate them to train hard this summer! 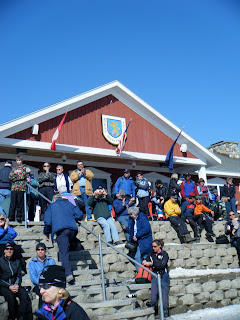 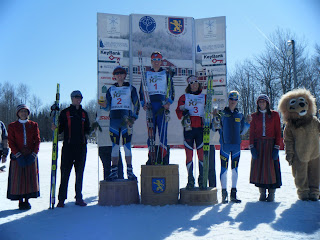 J1 boys "Potato Ceremony"  (Because that's what they do here.)  Forrest Mahlen is in second and Jack Novak is in fifth.  I'm sorry that I didn't catch the other ceremonies but I was still working - this was the last of the day.
Special note: Both Forrest and Jack made "MOM"patches for their jackets to represent their sponsor!!! 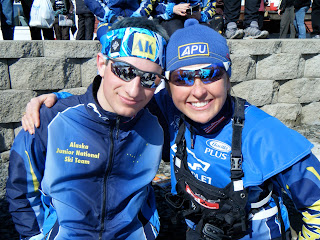 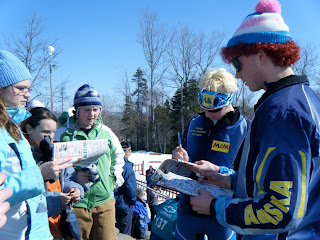 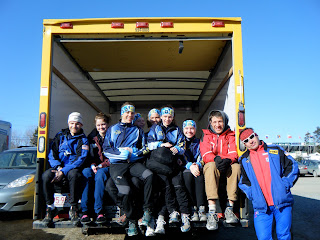 We have a U-haul to carry around kid's skis and bags for transport. 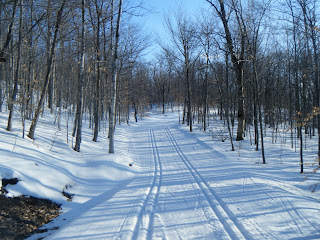 I haven't taken too many pictures here but this shot exemplifies many of the trails here.... I will get more active with the camera next week while I am here waiting for the national 30k championship and Super Tour finals - Tour de ski style. (More on that later)
Time to move on with the night's chores. I am giving a talk at the closing ceremonies/awards presentation tomorrow and I need to organize my thoughts.
On a completely separate note, my brother finally posted his Olympic-trip overview in case you haven't seen enough pictures. You can check it out here. He has a TON of pictures. Thanks for doing that Scott!
More to come soon - just have to write that speech and watch the Alaskan kids kick some butt in the relay tomorrow!
Good night,
Holly :)
Posted by Holly Brooks at 8:04 PM 1 comment: