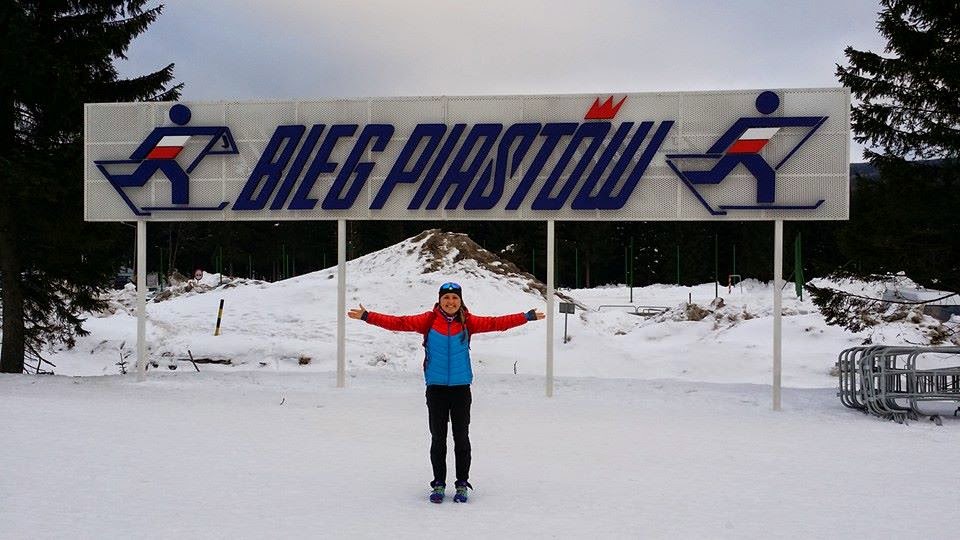 What a weekend….. While the racing itself wasn’t the best, I had a great time with my new friends which certainly fulfills the “exploring the world one ski marathon at a time” aspect of my winter!
During my initial planning stage months ago I saw the Bieg Piastow on the schedule, revisited the map to find that Szlarka Poreba was FAR from most ski locales in central Europe and thought, “Oh boy…. That’s going to be a hard one” (from a logistical stance).  How would I get there? Where would I stay? Who would help me wax my skis?? Of course I’ve asked myself these questions every weekend this winter but the thought of going to Poland for the first time alone seemed intimidating.

Then I met Adela at the Finish line of the La Sgambeda in December. She was one of the super strong girls that opted to go without kickwax two classic race days in a row – first the 15k team time trial and the next day, the 35k Swix Ski Classic. Needless to say, I was impressed!  During our short introduction I also learned that she didn’t start skiing until she was 20 years old – wow!
We kept in touch via Facebook and lamented about bad races at the Marcialonga (my race much worse than hers)  Somehow the topic of the Bieg Piastow came up in a FB messenger conversation and she offered to help me “manage” the trip. Once again, the kindness of new friends (or strangers) shines through!

After weighting the options I decided to fly to Prague where Adela & her boyfriend Jiri, picked me up for the 2 hour drive to the race venue.  The Bieg Piastow race is in Poland but we stayed in Harrachov, Czech Republic literally two kilometers down the highway.  The Bieg venue hosted a World Cup race two years ago but I didn’t attend.  We arrived Wednesday night for a Saturday race. I was pretty beat from the long International travel (from the Birkie) and slept like a ROCK the first night with assistance from a double dose of sleeping pills.

Each day leading up to the race more and more people showed up for what I’ll call the “Czech Alliance +Holly” which was Adela, Jiri and Jiri’s father, Jiri Senior AKA skiman #1. Then Petr Novak (Current FIS Marathon Cup men’s leader) and his mother and father plus his ski man, “Lada.”  For race day we were joined by Petr’s girlfriend Pavlina and her friend Petra. The family aspect of the Czech racing weekend really struck me as extraordinary, especially in comparison to my pseudo “orphan status.” 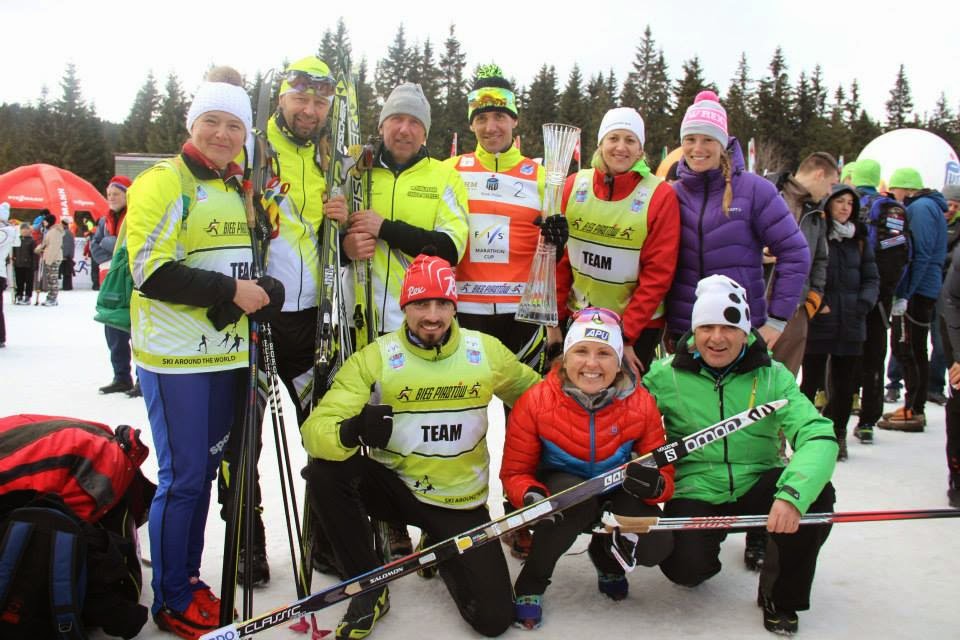 The whole gang after the race

Any fears I harbored were extinguished the second Adela and Jiri picked me up from the airport. The entire crew was extremely welcoming and immediately took me as “one of the team” eventhough I was anything but…. Only Adela, Petr, Pavlina & Petra spoke English but it was amazing what we were able to accomplish with smiles, gestures, and lots and lots of acting not to mention Adela’s tireless translation skills. The intricacies of kick wax adjustment, how to offer feed support on a 50k marathon race loop, and stories about home were communicated without any major hiccups. It was amazing.
Due to the kindness and extreme amount of effort that “team Czech” put into me I wanted to race well for them almost more than the valuable FIS Marathon Cup points I needed to hold onto the red leader’s bib!  I cannot express how much they went above and beyond to make me feel welcomed and supported. With the race being so close to home Adela did a lot of cooking prior to the trip and we ate things that she & her family grew, raised, or harvested. Fresh eggs, a homemade cake, rabbit soup (!) pickled beets, the best meatloaf I’ve ever had…. 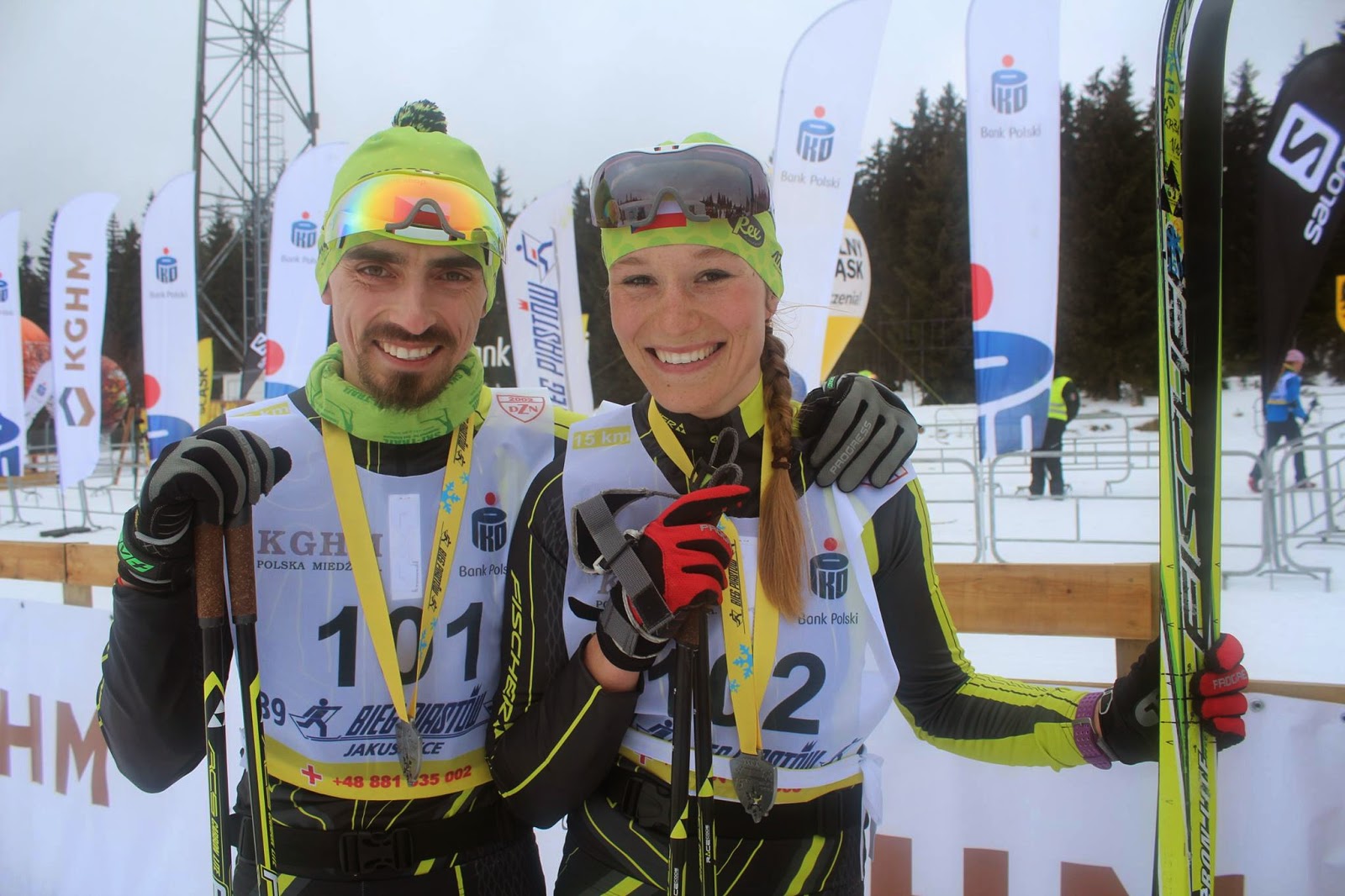 My new (fast!) friends!  They competed on Friday and Sunday and each won both races....

Then it was race morning and let’s just say that it came really, really early. I usually have an amazing internal clock and will frequently wake up two minutes before my alarm goes off.  Saturday morning I woke up, ready to race. I went downstairs, made a big bowl of 50k oatmeal (peanut butter, banana, raisins, yogurt, salt, honey) and drank two cups of coffee. I finished and thought it weird that other people weren’t joining me in the kitchen. It took me a full 45 minutes to realize that it was ONE THIRTY AM, not SIX THIRTY AM. SH*%!!! Upset with myself I got back into bed with a full stomach, full bladder and laid in bed for the next five hours wide awake with two Starbucks Vias in my system. Unable to fall asleep I caught up on all my favorite blogs, twitter, and saw everything friends posted on Facebook.  Let's just say it was not the ideal start to an important race. 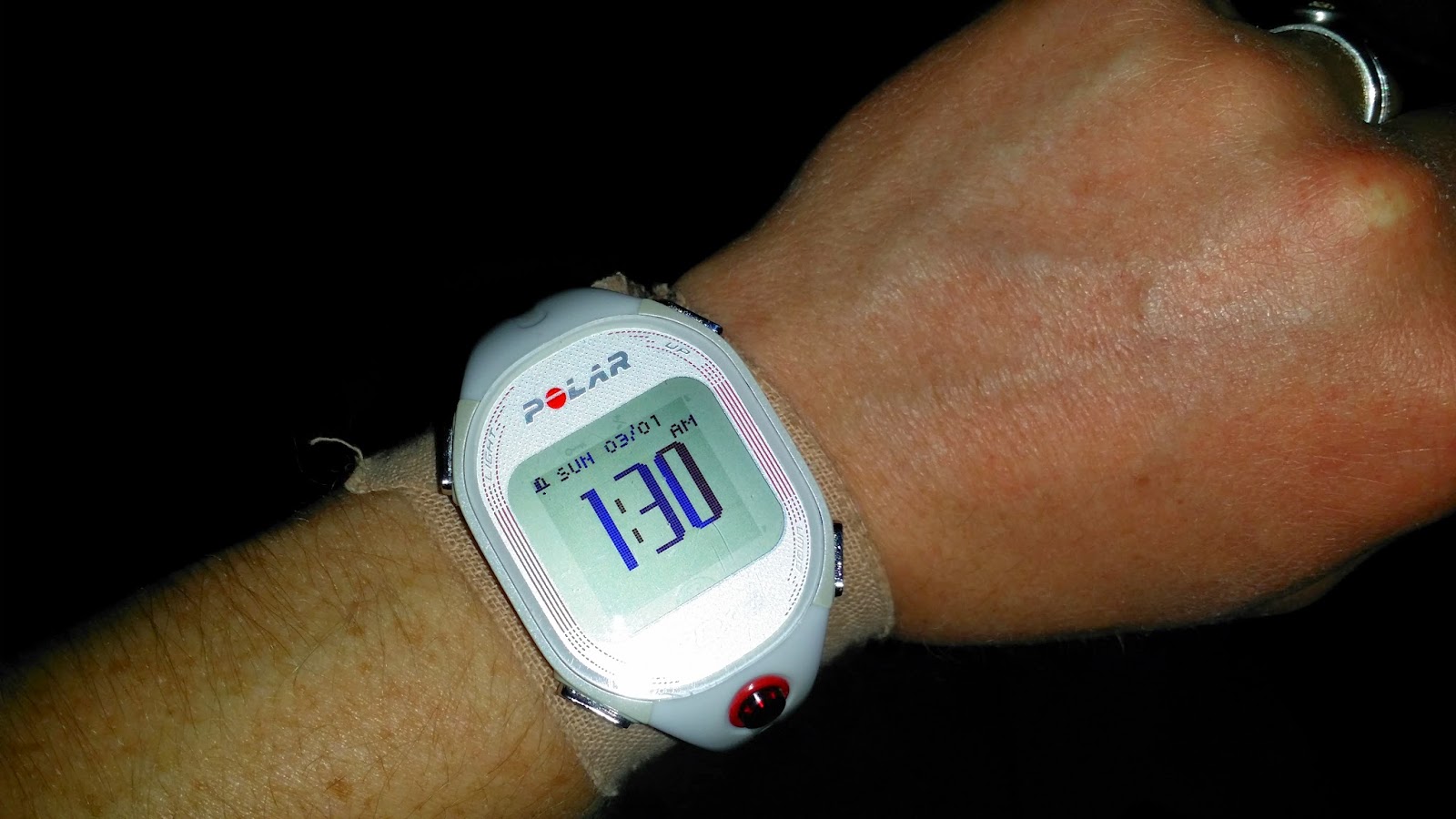 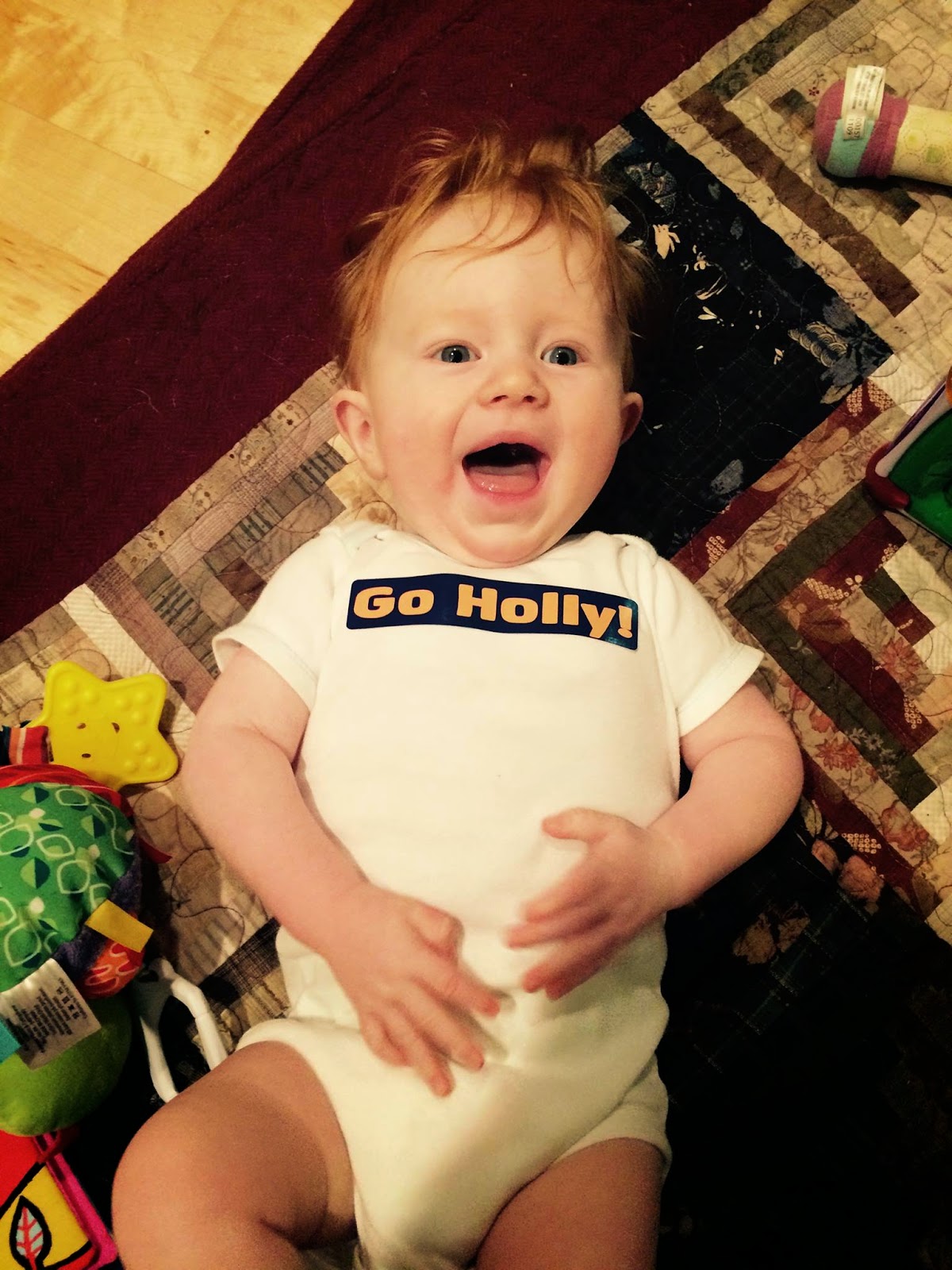 This picture brightened my day and made me smile though! 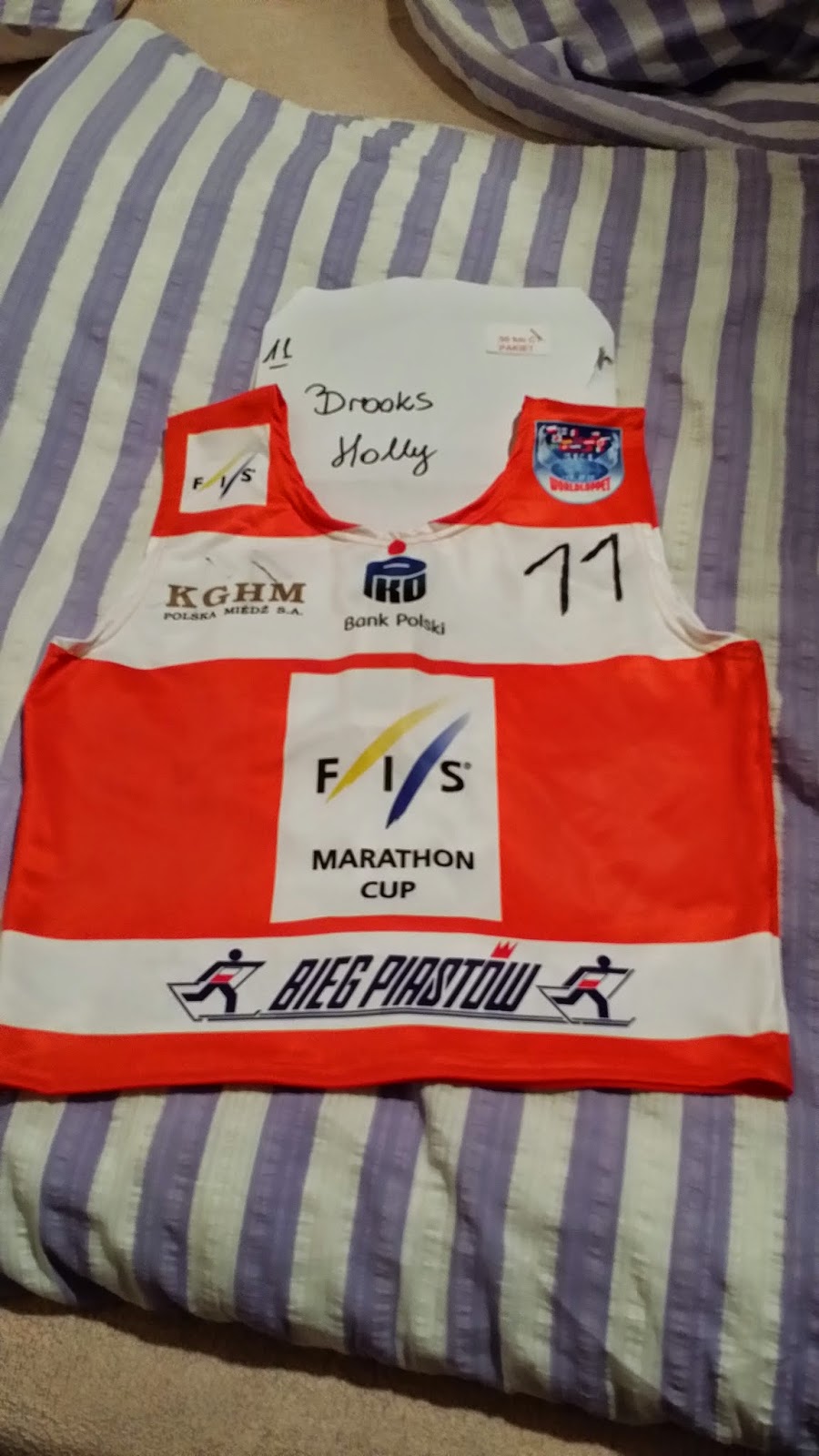 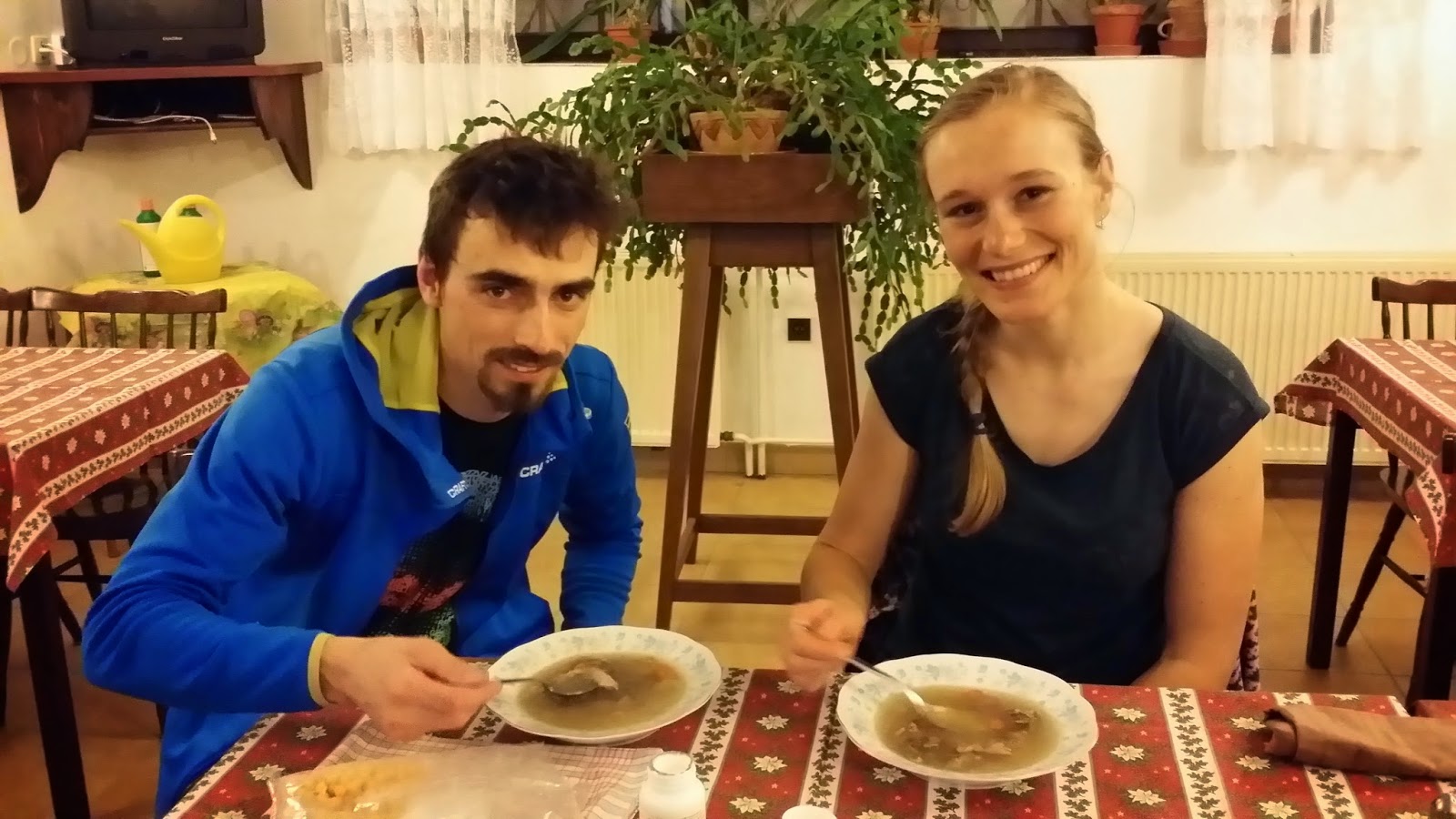 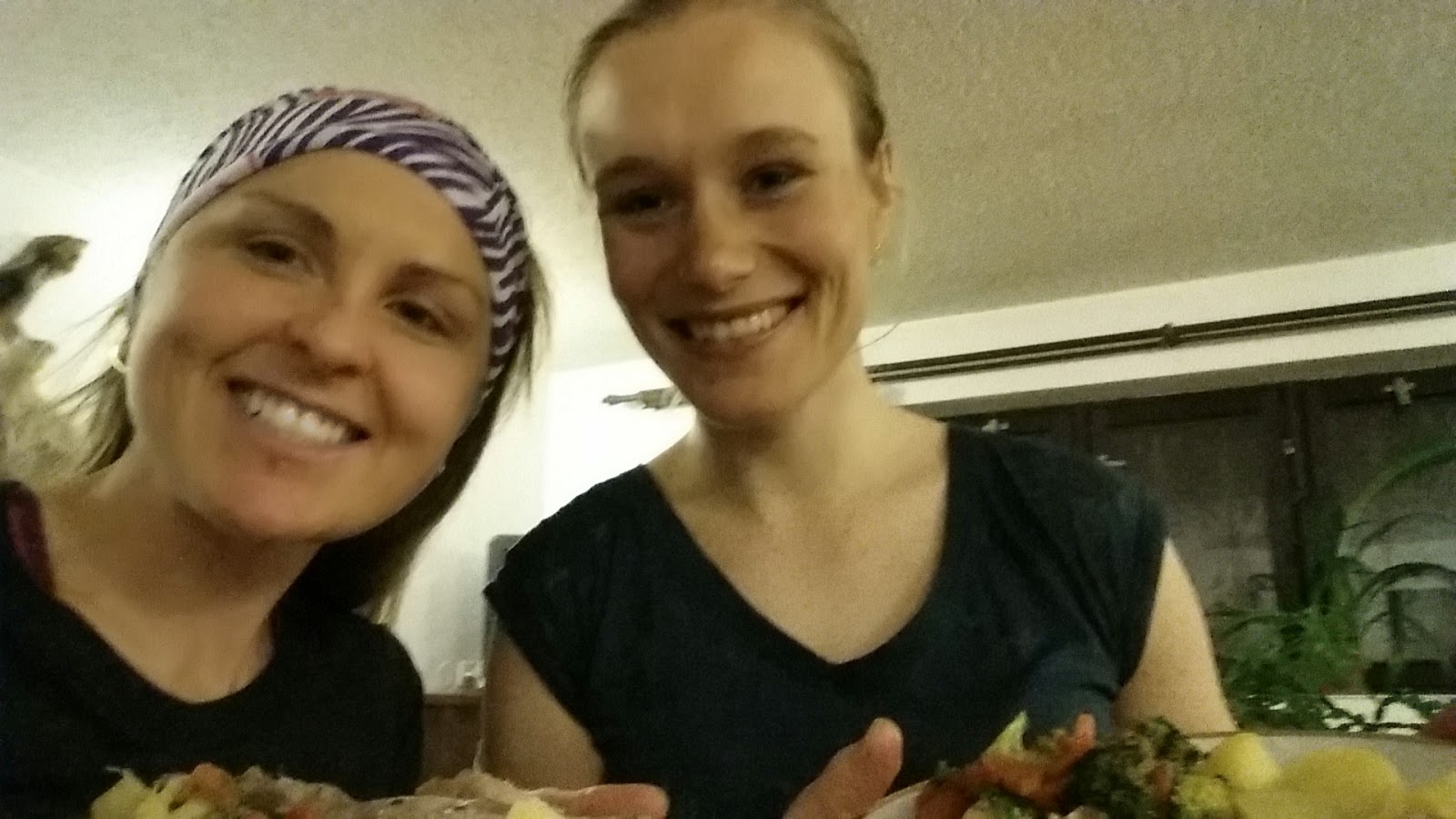 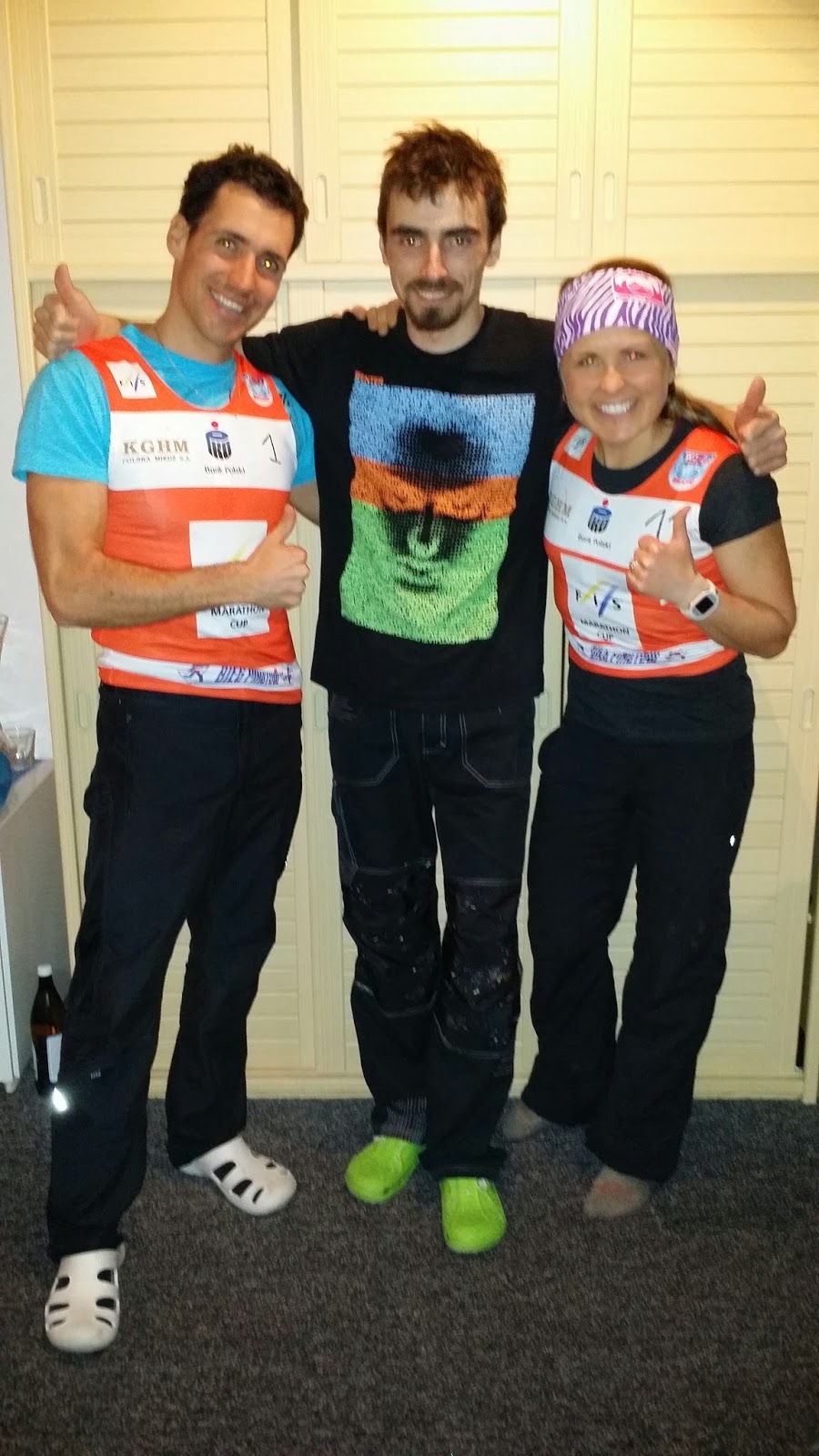 The night before in our red bibs.... determined to keep them! 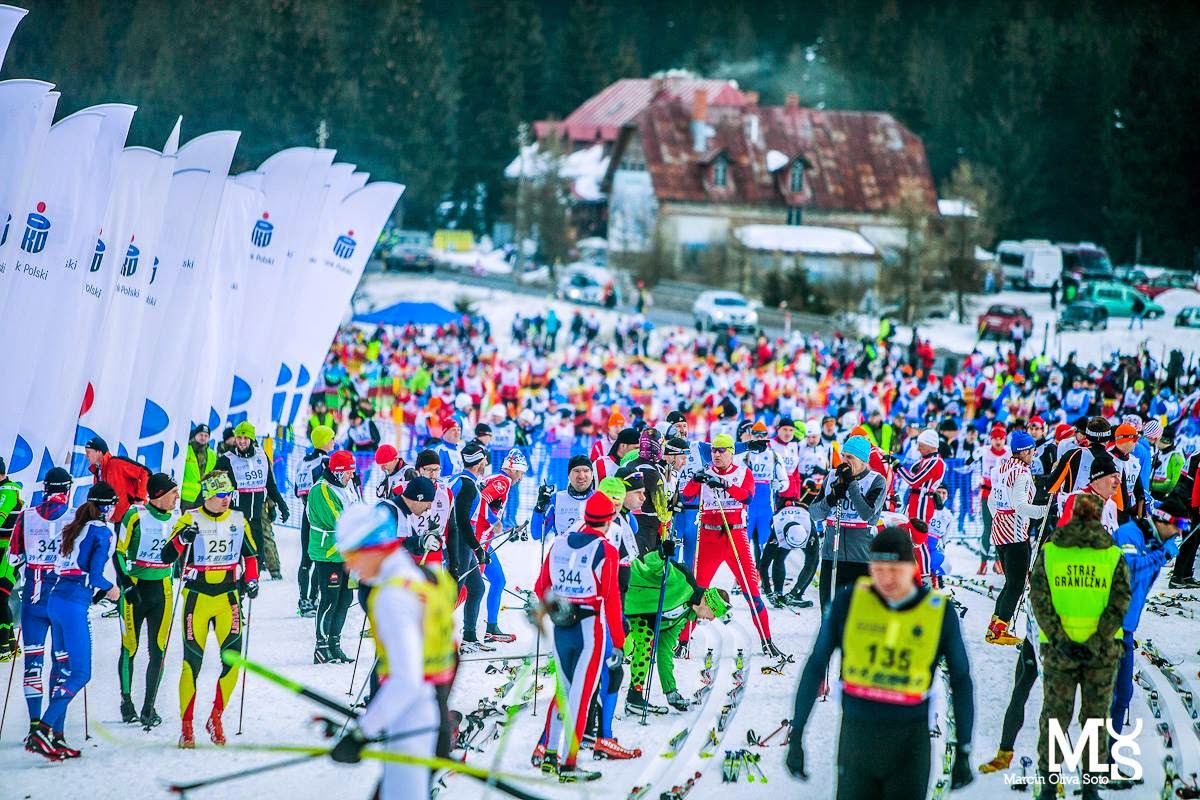 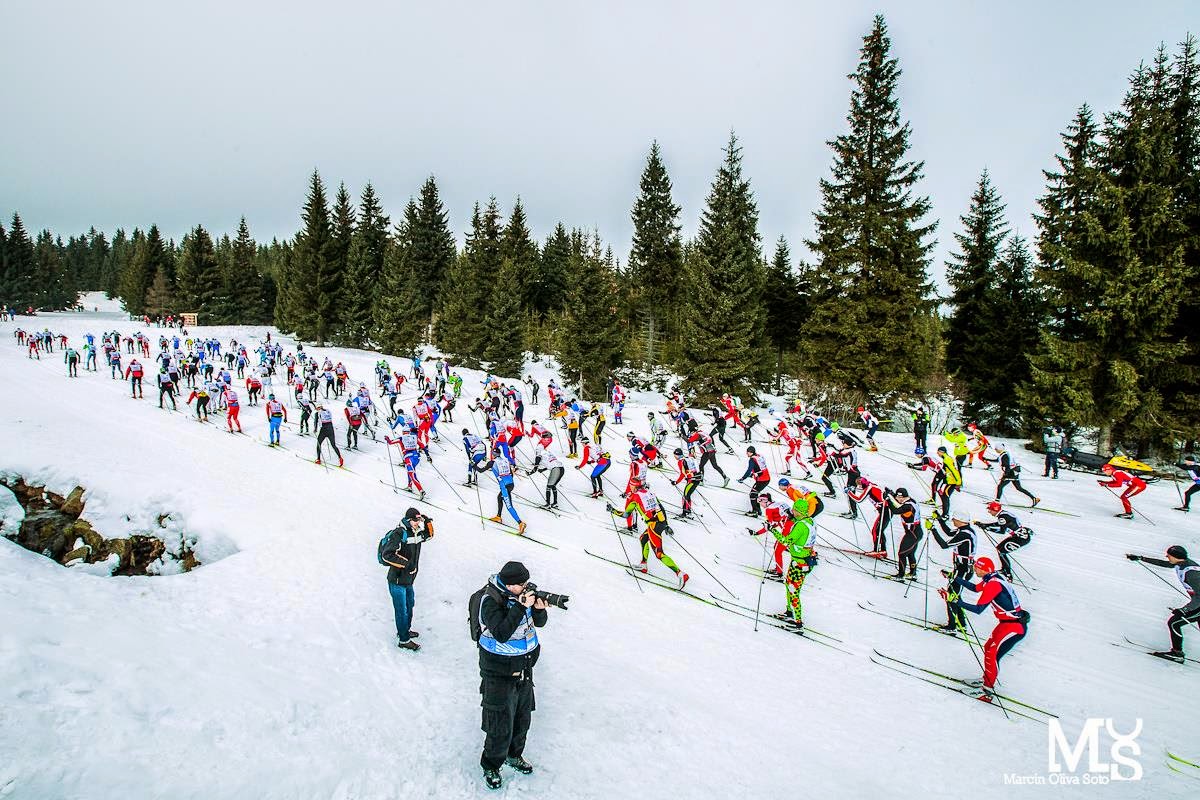 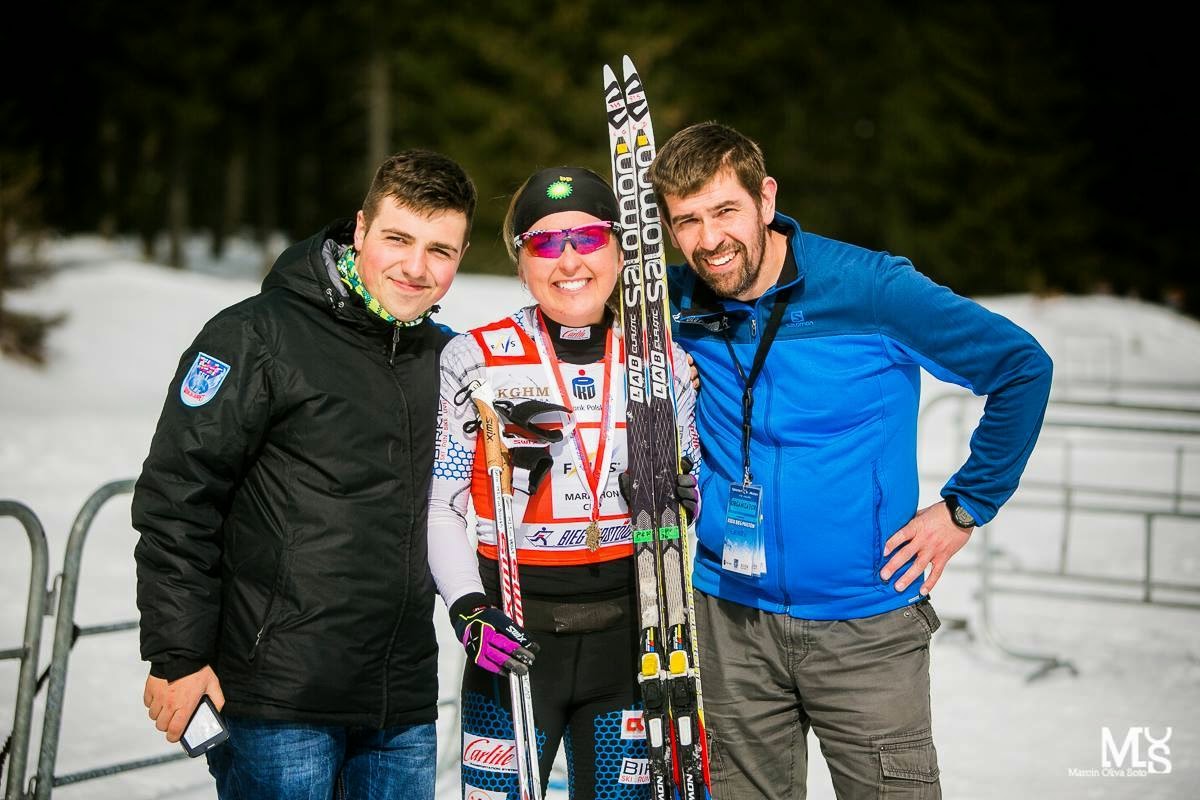 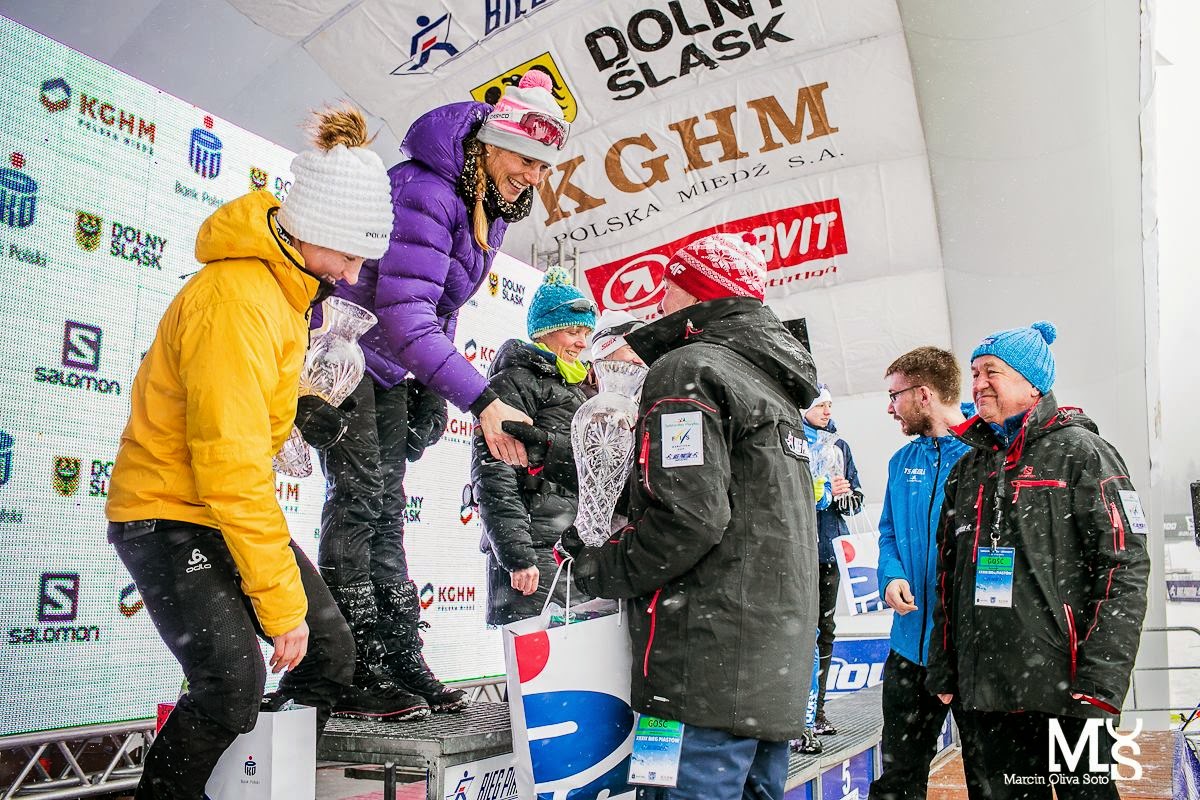 Adela receiving her award from one of the two races she won over the weekend
Photo, Marcin Oliva Soto 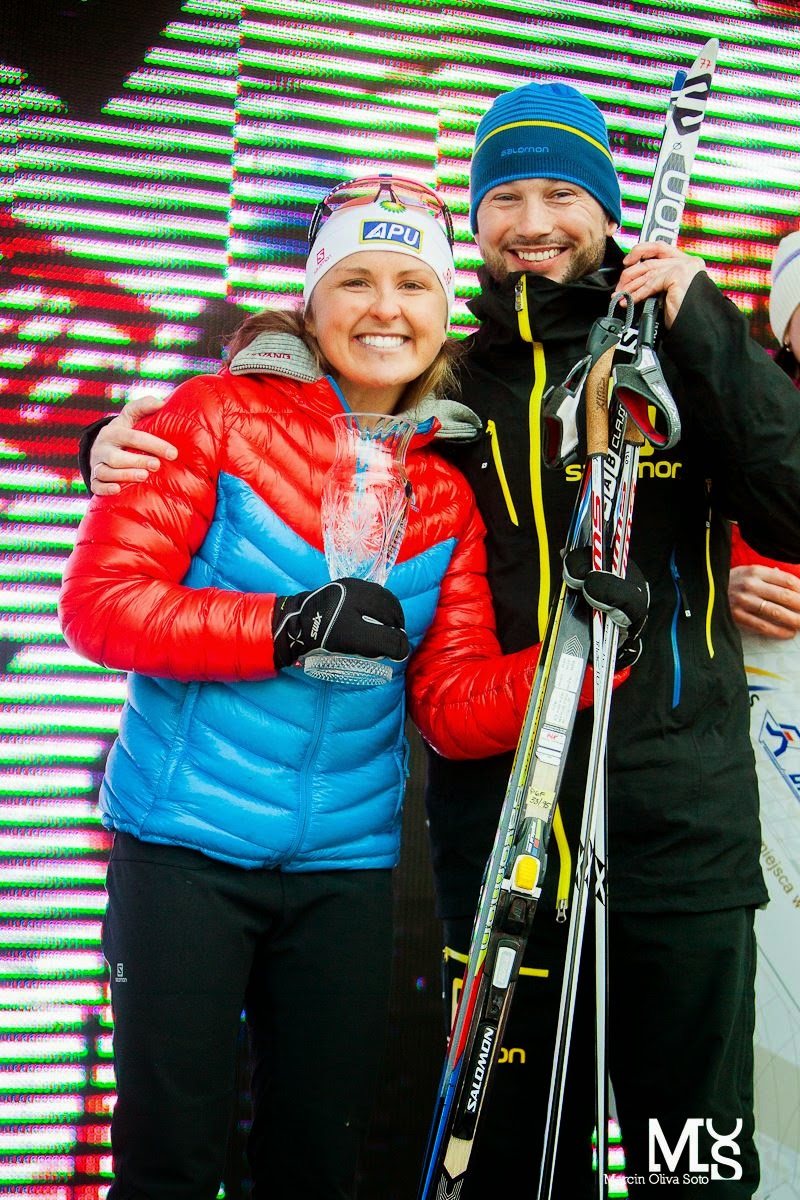 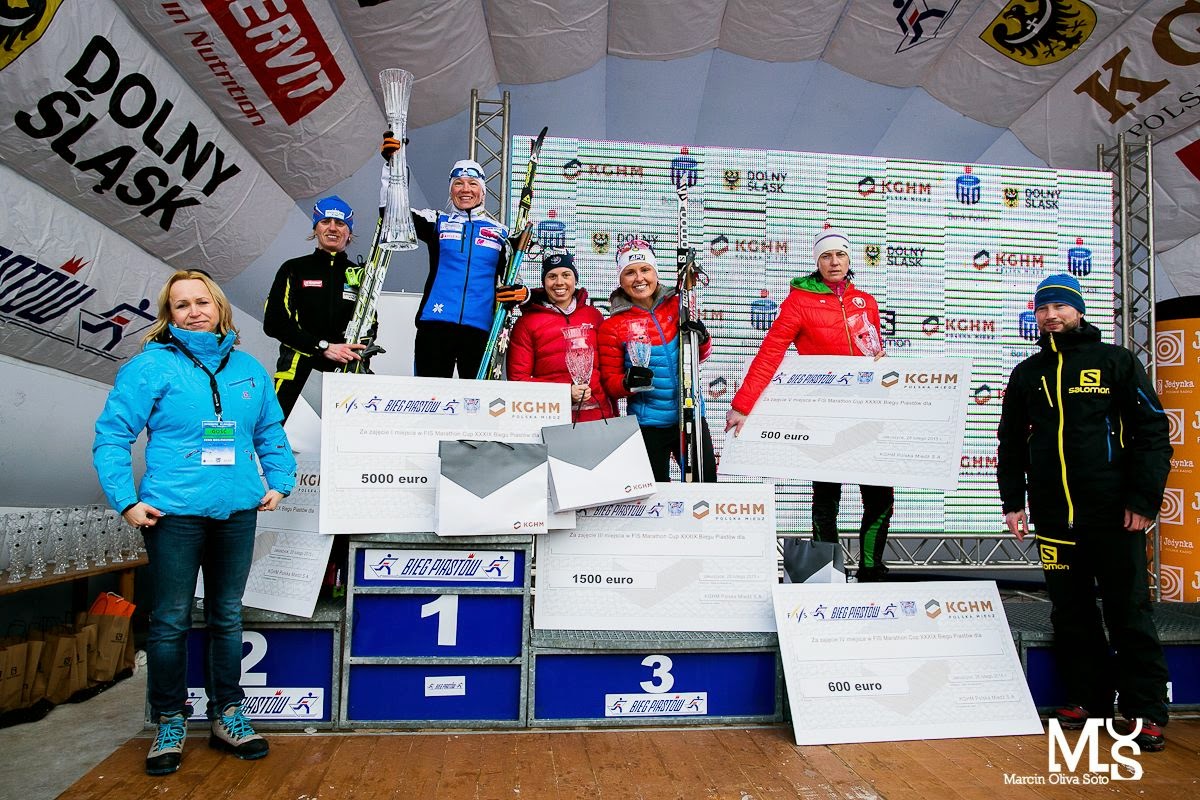 Women's podium. The race gave beautiful crystal/glass engraved vases.  Maybe it's a good thing I didn't win because I have NO idea how I would get the vase that Tatijana is holding back to AK!
Photo, Marcin Oliva Soto 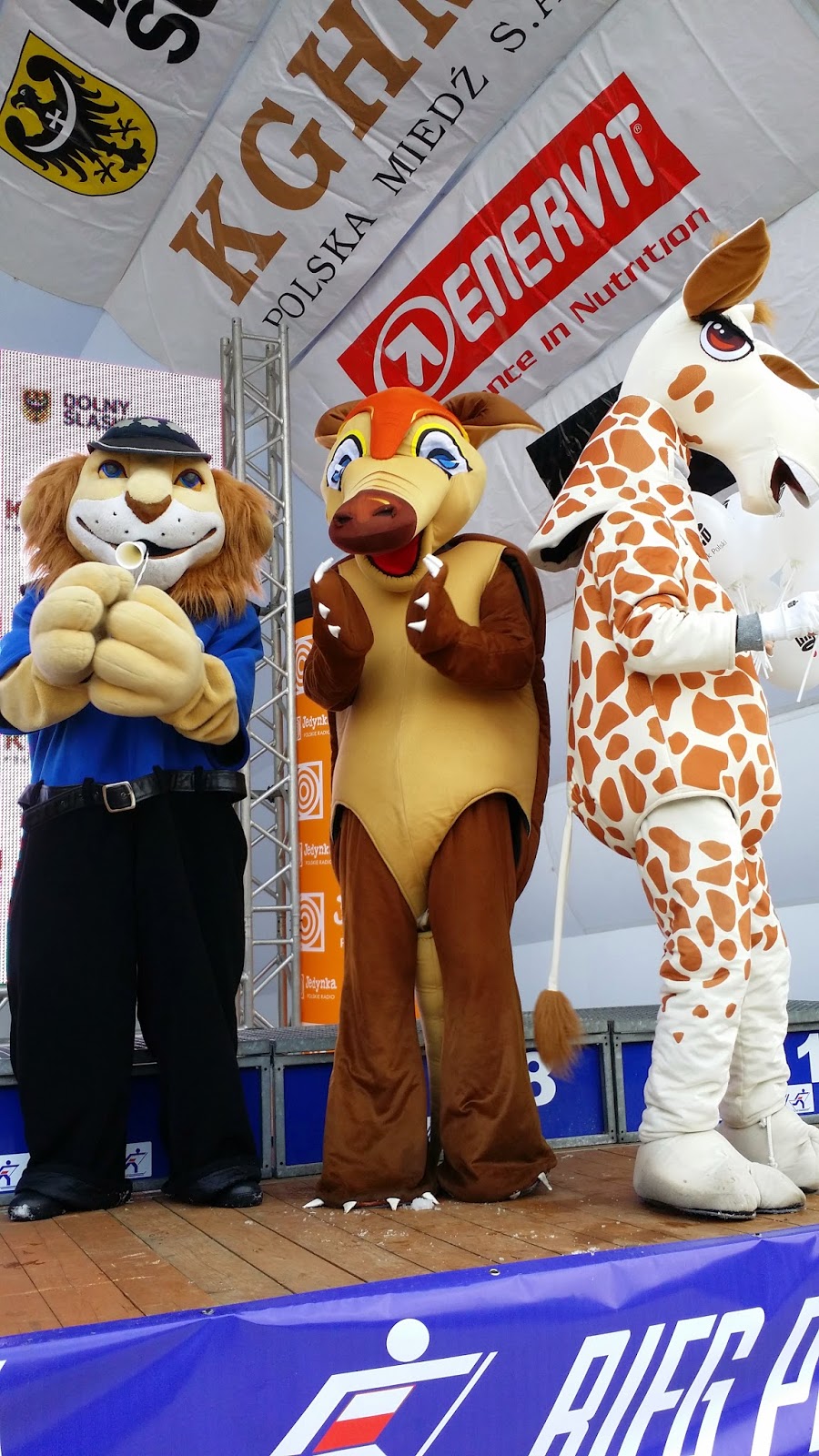 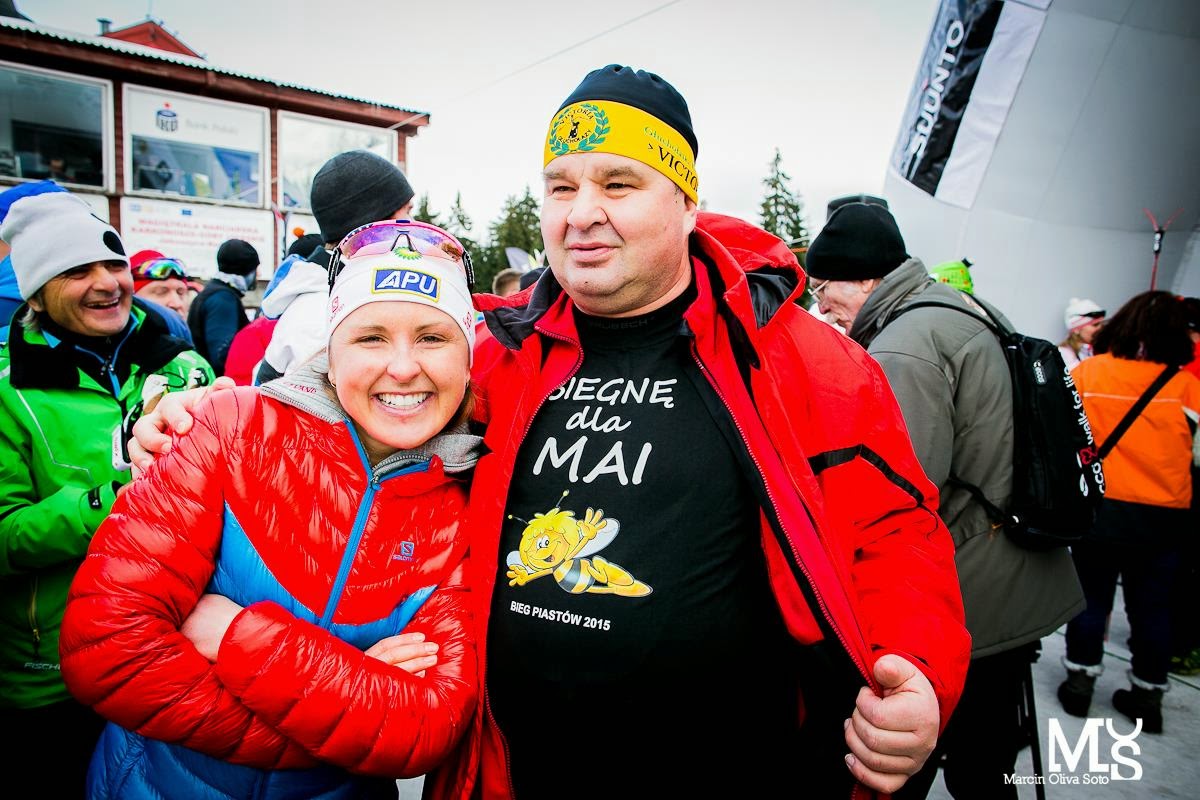 This guy looks disinterested for the shot but believe me, he was interested in getting his picture taken with me :)
Photo, Marcin Oliva Soto 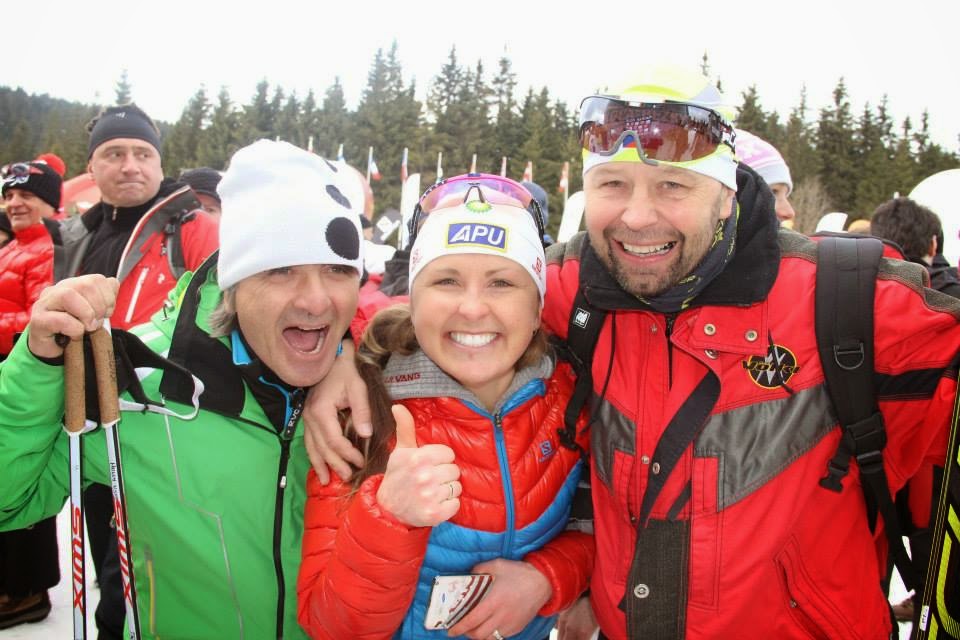 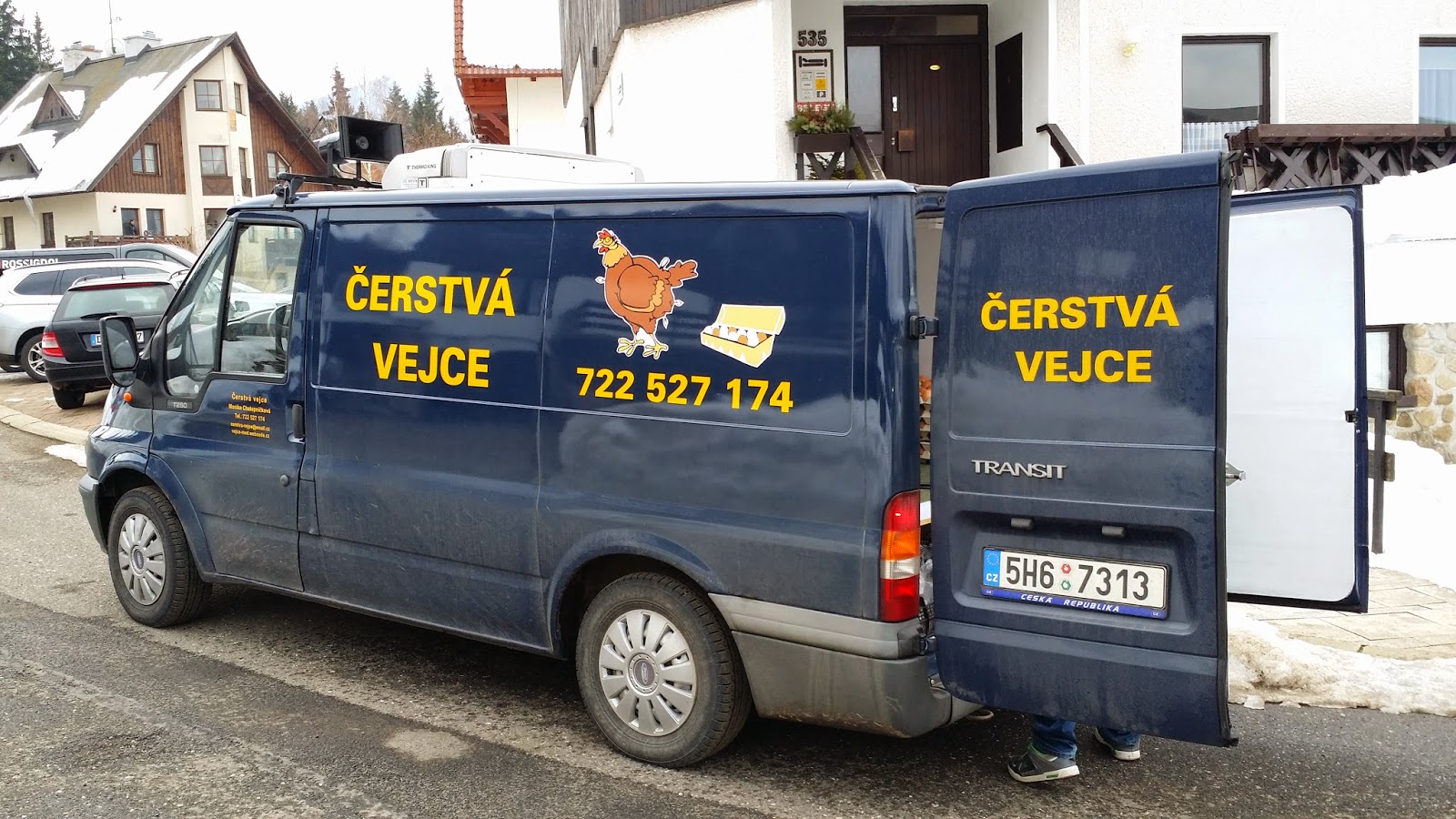 Like an ice cream truck but for eggs and produce - complete with clucking hen music!

Regarding the race..... I had heard the course was hard - more like true classic skiing with uphills and downhills. While it wasn't flat there was a HUGE amount of Double pole which has proven hard for me this year. While the tendinitis in my arms is better than it was 3 weeks ago it's still bad making it so I can't train DP. That and the other girls were just stronger and faster. No excuses.  But, I'm pumped that the last two races are skate. I've beaten all of my major FIS Marathon Cup competitors in every skate race this season so I'm hoping the cards are stacked in my favor. I do have a 17 point deficit that I have to make up though. While it would have been nice to ski faster in Poland I'm keeping the race for the overall title interesting - it's a true "nail biter" and will most surely come down to the final race, a 50k skate in Khanty Mansisyk Russia April 11th! Going to Russia in mid April is a topic for another blog post.... 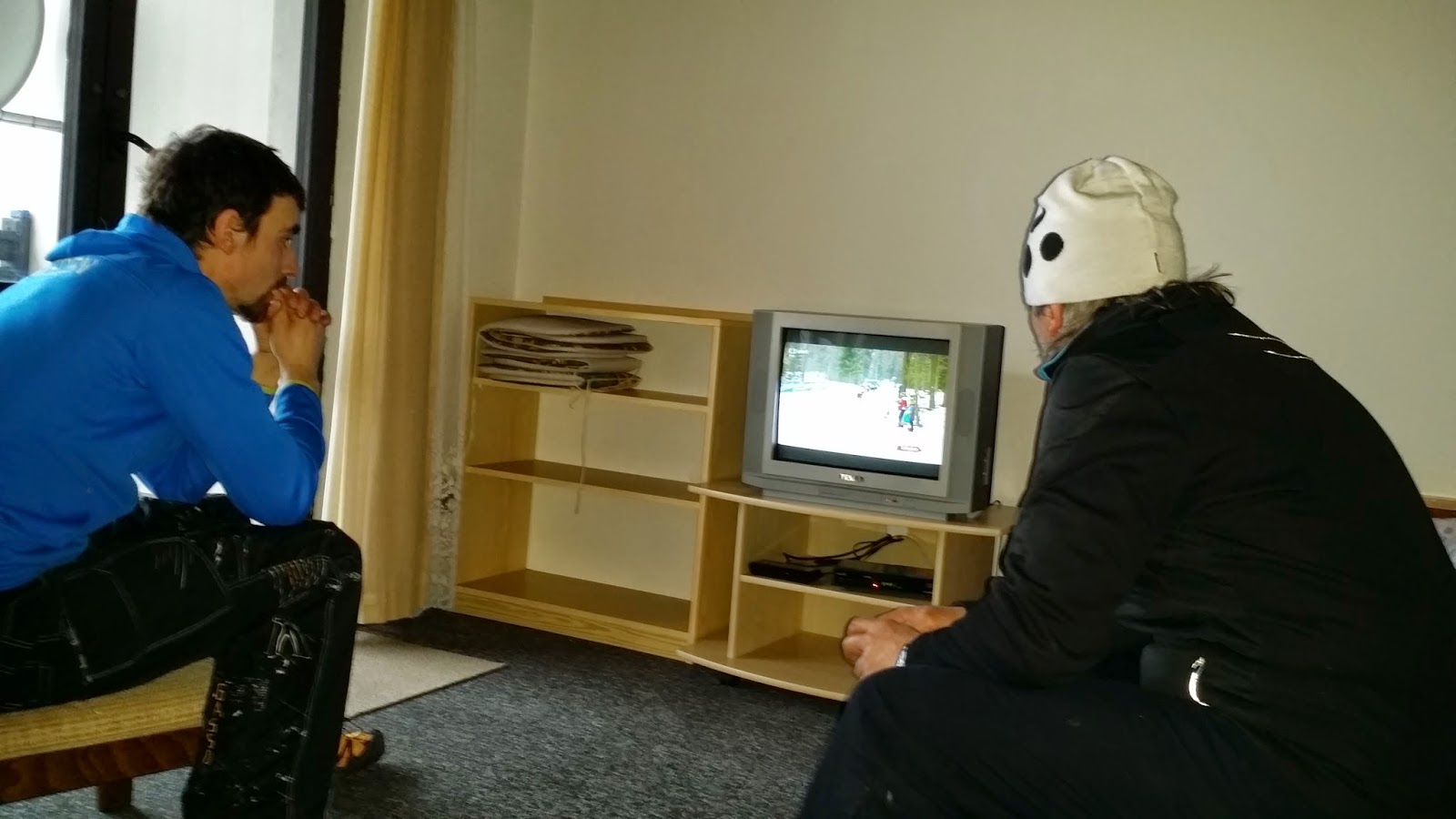 The weekend ended on a great note. I was able to watch 37 year old (!) Lukas Bauer of the Czech Republic ski his way into history and earn the silver medal in the men's 50k at World Champs. It was beyond fun cheering for a Czech skier in Czech, with Czechs! Congrats to Lukas!

If you haven't seen it you have to check out this short sub two minute youtube clip!

Last but certainly not least, a HUGE THANK YOU to Chelsea Little for the Internet, the couch and the storage space in Zurich. Without her help I don't know where I'd be!

Off to catch the train(s) to the Engadin Valley!!!!
Check back soon & thanks for the cheers,
Holly
Posted by Holly Brooks at 6:56 AM No comments: