The start list is posted. I am bib #50 - again.  There are only 54 racers in the field but that is not to be underestimated. These are 54 of the fastest women in the WORLD!  Racers have to qualify for the sprint race by having good FIS Sprint profiles.  That removes many of the "exotics" (I was informed tonight that that is the proper term) and folks racing for non-traditional ski countries. Anyways, my start time is 10:27:30 for those that are interested. I've heard that some of the "live" coverage isn't live whatsoever but some of you are clever enough to disguise your IP addresses to receive coverage from other countries. I don't even begin to know how that works....

Anyways, thanks for all the support. I'll report back tomorrow after this is all said and done.
Good night,

Two hours of technical difficulties and a deleted blog later..........

Thanks so much for all the kind words about the race yesterday.  You guys are all AWESOME. And, special thanks to the Schoens who forwarded a link to my NBC coverage from Anchorage's KTUU website.  To check it out, click here.  The co-comentator, Chad Samela compared my Olympic appearance to the Lions making the Super Bowl.  I don't know anything about football but I am going to venture to say that he was calling me a long shot (or last minute) to make this team which is completely true :)

A big agenda to cover on the blog this afternoon!  First of all, this was the seen out our window this morning - the first time that we've seen ANY new white stuff in the athlete village: 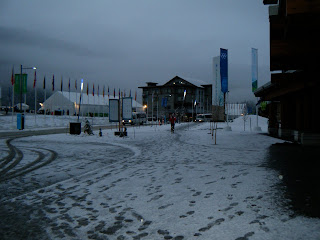 The conditions inspire me to publish a packing list for those that are enroute to Whistler to watch and cheer:
1) Bring your rain boots - or, if you're an Alaskan, bring your x-tra tuffs! This was the seen today at the venue: 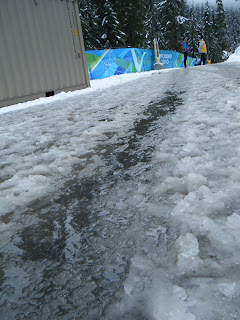 2) If you plan on doing any nordic skiing down here, bring FISH SCALES! I would not want to be out here classic waxing. Skate skis or running shoes will do the trick too.
3) Bring your patience for the security lines and the buses.
4) Your smile - the volunteers and everyone involved in the Olympics is super happy and nice - don't be the odd one out!
5) USA costumes and schwag - the Nowegians have us totally out done with National pride on the side of the ski trails... be loud, be colorful, and if you're Alaskan, don't forget your flag!
6) Last but certainly not least - bring your camera to capture the moment (I got a new water proof one for the occasion after my other one died.)
This was a random scene at the venue this morning: 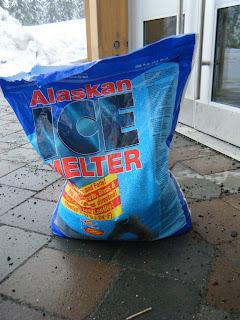 My training session earlier today focused on preparing for tomorrow's classic sprint.  It should be fun and exciting... be sure to tune in.  I hadn't fallen on the trails at all until today - Kikkan and I were doing speed work on the course and I bit it HARD on the 180 degree high speed corner.  I had snow stuffed down my practice bib and my jacket.  Hope that doesn't happen tomorrow.
The condition were variable, per the usual at Whistler Olympic park.  When I first got there it was 33 degrees and snowing hard.  Perhaps the one constant is there was so much water in the snow that the tracks were actually BLUE instead of white!  For my training session I used my "zero" skis.  Zeros are basically new-school no wax skis that excel in conditions like we are seeing here.  I've included a picture of the bottom of my ski... 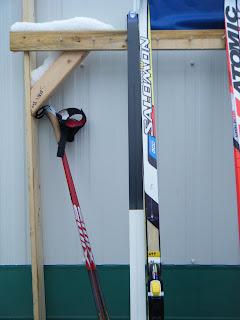 Ski selection and wax will be critical in tomorrow's race. I'm looking forward to it! My goal is to qualify for the elimination heats which necessitates at top 30 preformance.  I did it in Canmore last week - let's see if I can do it again.
Last but not least, I would like to wish all of the APU skiers who are competing in Middle School Championships and High School Region 4 GOOD LUCK this week!  This photo is my lame attempt at a wave - 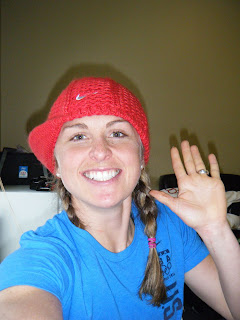 I miss you all and think of you often!
That's it for now... my stomach is grumbling,
Holly :)
Posted by Holly Brooks at 5:29 PM 6 comments: