Speaking of “Whereabouts” Anti-Doping efforts have been quite active lately, collecting urine samples from athletes far and wide.  Last Sunday was our much-anticipated day off from training and an opportunity to sleep in after a week of busy, consecutive 13-hour days. I nearly jumped out of bed at 6am when I heard a loud “knock, knock, knock” on the condo door.  Not knowing how long the person had been trying to wake us I sprinted to the door and nearly ran into Kikkan who was equally half asleep.  As it turns out the DCO (Drug Officer) was testing on behalf of FIS and Jessie was the only name on the list.

But don’t worry, the rest of us got our turn too.  Just two days later came another knock on the door, this time at 7:30 in the morning, literally 5 minutes after I had gone to the bathroom. Liz lucked out by hitting the snooze alarm that morning and she could “provide the sample” on command.  I, however was not so lucky. Upon their arrival I realized my predicament and started pounding liquids, alternating between water and coffee. We were due to leave for practice at Soldier Hollow at 8:25 meaning that I had less than an hour to provide an ample sample, get through the paperwork, and ready myself for morning training. On my first attempt I could only squeeze (yes, I know…) 45 ml into the cup for testing.  45 is only ½ of the required 90 ml so after 5 minutes of trying with the sink water running for inspiration, I provided a partial sample.  This brings about an additional layer of paperwork.  Then, the sample had to be within my sight the entire time and I had to be within sight of the DCO the entire time until my "test" was complete. This resulted in my running around the condo, drinking water and packing for the roller ski workout, drinking coffee, and worrying that my inability to pee on command was going to make everyone late for training - all while toting around a jar of my own pee. (Sorry if this is a bit rough around the edges... I'm just trying to paint a clear picture of a realistic situation!)

Needless to say, I was able to deliver and we were less than five minutes late to practice!  Apparently all "Olympic hopefuls" must be drug tested at least once within a 150-day window before the Sochi......

That's it for now.... expect a longer post soon! Thanks for ready & have a great day!
Cheers,
Holly :) 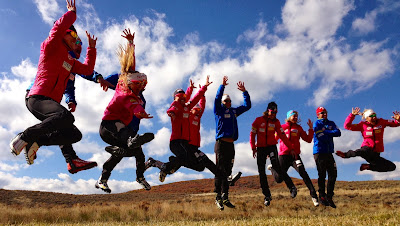 Zuzana Rogers Photo
Posted by Holly Brooks at 2:35 AM 4 comments: