Sometimes you get peanut butter when all you want is jelly... I was looking forward to soft tracks and slush and showed up at the venue to find classic tracks resembling "ice luges."  I'm not big into making excuses for goals that come short - and I won't. Sometimes, you just need to be faster, or have more experience, or be tougher. Today I needed, or at least wanted to be faster than I was. 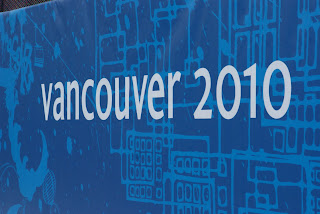 I had two goals coming into the classic sprint. First, I really wanted to qualify for the rounds by skiing into the top 30. I was 1.6 seconds from making that goal. My other goal was to improve upon the result of my race on Monday. I did that by moving up four positions in the field. (Yes, it was a smaller field overall but I have reason to believe that the whole front end of the field was represented.)  Now that I've had some time to reflect upon my result I realize that maybe it wasn't as bad as I initially thought. It's important to take things into perspective. This was only my 7th sprint race in the past 5 or so years and my fourth International racing experience ever. This is the Olympic Games for crying out loud and I was the 38th fastest women in one of the greatest competitions on earth. How sweet is that? 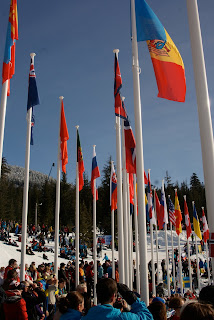 I think that ski racing has a knack for bringing out true character in individuals. I once heard a really sweet quote that goes something like this, "a true hero is humble when they win and gracious in defeat." Not that I "lost" or anything but when I crossed the finish line I was bummed and there was nothing I wanted more than to have a few minutes to myself. NOPE. "You've been randomly selected for doping control"..... Now don't get me wrong, I'm all about clean competition and fair play but today was rough having to walk through the media's "mixed zone" followed by an entourage of chaperones and escort/doctors to doping control...... Four bottles of water later and a pee experience where you're squatting over a small cup surrounded by mirrors with your pants at your ankles and your shirt pulled up over your belly button isn't my idea of fun. It's experiences like these that make we wish we could just trust that everyone was competing fairly. Oh well. 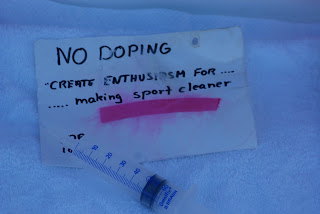 After my "pit-stop" I hurried back to the athlete lodge because it was time for the quarterfinals to start. Two of my American teammates, Kikkan and Simi, made it into the heats and I wanted to cheer them on - even if it was through a tv screen. It was funny to be AT the venue and almost prefer to watch the TV because you could see more of the race through the live feed. I did go out to find my family and husband for the finals. It was fun to watch the race in what was HOT SUN. 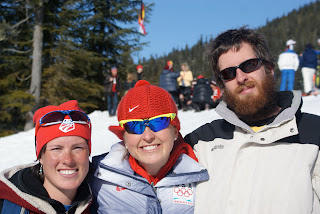 My sister Robin, myself, and brother Scott, aka "mountain man" right now :)
Perhaps the most dramatic part of the whole day was the fact that the heavy favorite, Petra Majdic of Slovenia fell off the course ten feet into a STREAM during the warm up.  She broke one ski, both her poles, and really hurt her back.  She finished the day with a bronze medal. That was impressive!  There are a couple photos -click here.  There is an even more impressive video somewhere but I haven't located it yet.
Anyways, congratulations to Kikkan for an awesome preformance and 8th place finish today - that was impressive! Time to get some rest so I can prepare for Pursuit training tomorrow.

Thanks for reading and thank so much to everyone who was out there cheering for us today. You guys were great! 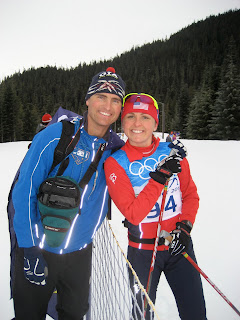 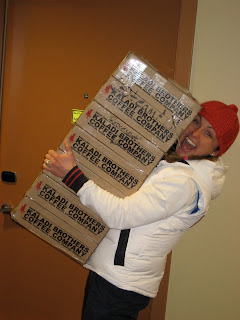