Spring has been busy. But I am always busy.  The real reason there's been a lack of blog postings recently is because I can't get my iphoto to work. My pictures are in essence "stuck" on my camera and I can't access iphoto at all - although I know I didn't erase all my pictures. When it comes to fixing technical problems I'm about as worthless as anyone or anything..... I personally don't like blogs without photos so I will do my best to post with some haphazard photos that have been given to me by others while I find someone to help me fix my computer!

Meanwhile, this past weekend in Alaska was amazing. I got out for some much needed adventures - the kind that are good and restful for the soul and mind but not for the body! I'm tired and paying for it this week in training! On Saturday, my teammate Katie Ronsee and I skied/hiked from the South Fork of the Eagle River to Glen Alps.  Conditions were perfect and the trip took us 6 1/2 hours. If that wasn't enough, we decided that that wasn't enough and we ran into town carrying our skis in hands which took another 2 hours. 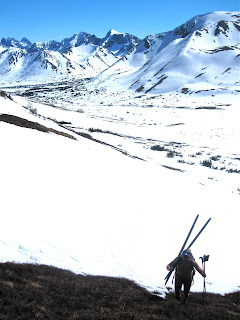 Hiking up Ship Lake Pass with skis on my back... we skied from the far left end of picture...
(Thanks to Katie for sending! I have some awesome ones of her once I can access them)
Sunday was just as nice of a day and Rob and I skied above Whitter, AK - something that we've always wanted to do. The day was bluebird with no wind. It's days like these that make me think that Alaska is the best place on earth (when it's nice!) It was a four hour HAUL to get to our skiing starting point but the views down to the ocean and Blackstone Bay in Prince William Sound made it well worth it. Besides, I'm a complete nordic dork in that I like skinning up just as much if not MORE than skiing down. Can I admit that? 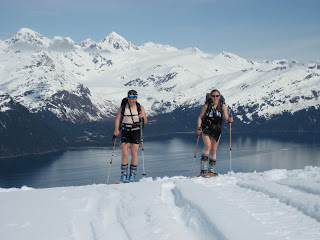 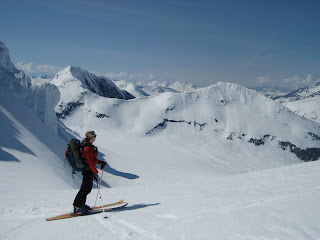 Olivia checking out the view 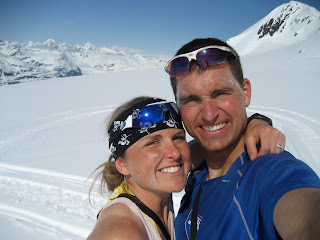 Finally! A good day in the backcountry with Rob! (It was really bright looking into the sun!) 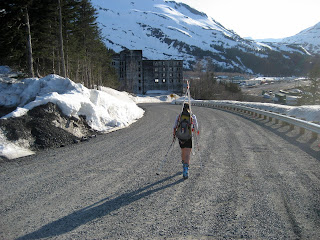 Every good long back country day ends with a ski boot hike!
On another note,

The visit to the White House in late April was awesome. We met the Obamas and the Bidens - pictures are apparently in the mail as they didn't support taking pictures with our own cameras.  All four leaders (Barack, Michelle, Joe, and Jill) were impressive and genuine in person. I had to pinch myself that we were getting to meet possibly the most famous person in the world right now, Obama. Regardless of what you may think of his politics his smile is even more electric in person and he looked at us with the proud eyes of a parent rather than a big political leader going through the motions. Michelle gave each and every one of us a hug!!!!

After the White House visit and USOC trip I stayed in DC two additional days to spend time with my sister who is biking AROUND the country. It was great to spend time with her and get a better idea of her trip. I learned about "stealth camping" which literally means that "she can camp anywhere and everywhere."  Robin is biking around the country with no itinerary and staying in a tent between houses of friends, family, and people she meets along the way. Her blog is called, "On the Road."

(I will post pictures from these events as soon as I figure out my IT problems!)

In the meantime, here is a blog post that I wrote on the plane from Washington State to Washington DC, still missing some of the intended photos.

Well, I’m in the air (flying) again. This time the travel isn’t to compete in a race but to visit the White House and meet the President with the rest of the 2010 Vancouver Olympic squad!!!!!!  I’m really excited as this will present a great opportunity to spend some relaxed time with the other athletes – something I didn’t have time for with five separate races in Vancouver.
The past couple weeks have been crazy busy.  APU community program practices ran through the 9th of April and we had some great skiing. April can be awesome in Alaska and the skiing opportunities are plentiful.  For those that aren’t sick of track skiing, Nordic groomers are out every day, we hit up the single track and Tussock-skiing in a big way, (almost to a fault in this situation) 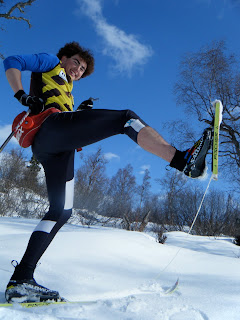 Forrest and his REALLY broken ski
The back country is loaded with snow, everyone is constantly checking the Alaskan Highway webcams and 24-hour weather stations in hopes that the crust skiing will set up.  (Skiing to the face of a glacier is an alright thing to do early morning before work!) (show pic from Portage last year) Alyeska, the local downhill resort has a ridiculous base of I don't know how many inches and they announced they’ll go strong through Memorial Day.  The skiing options are just one reason why I like to call Alaska home….
But, time to rewind – I shouldn’t get ahead of myself! Each spring we (the APU program) celebrates the end of the season by having a program-wide BBQ and relay race.  Young skiers pair up with (older) racers and ski a course often filled with fun obstacles and jumps.  There are no times, no egos – and at the end of the race, no one is really sure who won.  It’s great and chaotic…. A fun end of the season event for the different members of our diverse program to get together and exchange stories……
This picture features APU girls from three different levels – Devo girls in front (our middle school program) Junior girls sandwiched in the middle (our high school program) and University Elite girls lining the back. It’s fun to all be on the same team and it’s good exposure both up and down. The younger girls are exposed to “faster, older girls” and they remind us that snowball fights, making hand-made spandex, and beating up on the boys keep skiing fun and fresh. 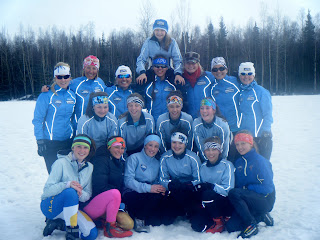 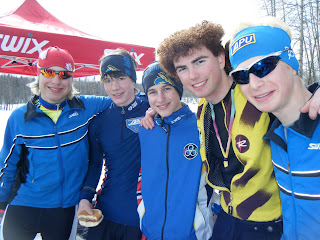 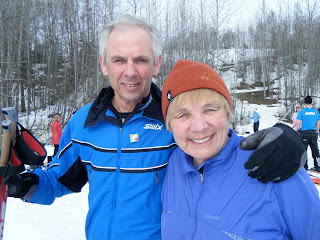 APU Masters, Sam and Berit Flora
The month of April represents a “changing of seasons” for anyone involved in skiing.  Our year isn’t based on the calendar but of course, the season of winter….This time of year coaches are usually frantically busy in the office planning the next season and athletes scatter near and far for some well-deserved R&R. This is the one time of year when it’s really “OK” to let your guard down and not train if you don’t feel like it (Otherwise, we’re busy training daily 54 weeks per year.)  As an athlete and a coach, the past couple of weeks have been crazy as I have my planning obligations as a coach combined with the body-fatigue of an athlete that needs a break! 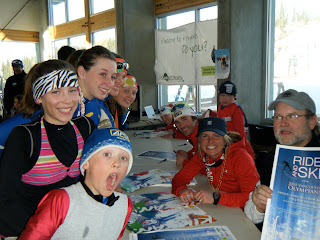 Kikkan, James, and I did a "Ride and Ski with the Alaskan Olympians" event free to all Alaksan kids. Here we are signing posters..... (Thanks to Lars Flora for organizing!)
Last year Rob and I rested up from the season on the north shore of Kauai. This year, instead of beaches and bikinis I opted to visit my family in Seattle enroute to Washington DC.  Spring time is often my favorite time of year in Seattle. I think my eyes and brain where on sensory overload as the flowers and flowering trees were out in full force, aroma, and color. While Anchorage may hold skiing over Seattle, Seattle definitely holds the cards for growing season and spring time beauty.
Between nights in Seattle I was able to spend some time at my family’s cabin at Snoqualmie Pass where I learned to ski.  It was really special to spend some quality time with my parents, brothers, and uncle.  One day we even took a day trip to the Columbia River Gorge for a desert hike to see the flowers in bloom.  This involved skiing out of the cabin, driving to Vantage to visit Petrified Tree State Park, hiking and running in 70 degree weather, then driving back only to ski back into the cabin in my shorts.  Cell phones and internet don’t work once we’re there so evenings are often filled with dinners aided by the light of the fireplace and Willie Nelson in the background. It’s nice to un-plug and focus on good dinner conversation rather than new email updates on my Anderiod J
Well, that’s it for the pre-WA DC update. I’m excited to see the other athletes and equally excited for my two additional days in DC.  My sister has been biking her legs off to meet me in the capital.  Also, one of my best friends from college will be in DC Friday night so we get to go to dinner!
Until next week and thanks for reading,
Holly J
Posted by Holly Brooks at 12:48 AM No comments: