The Scoop on Sochi

I'm sorry that I haven't blogged earlier. To be completely honest, I've been pretty overwhelmed with the whole Sochi situation. Also, my teammate, Noah Hoffman spends up to 3 hours a day on his blog and it's easy to feel like he's covering most everything. If you want to know what I had for breakfast, sometimes you can find the answer on Hoff's blog. Check it out here and throw a bookmark on it if you wish.  I will warn you though, due to popularity, his blog has been crashed with regularity. He's currently receiving technical assistance. (He thinks the crash is due to his site being passed around by Russians..... which could mean upwards of 50k hits!)

While my blog has been lacking I HAVE been tweeting up to ten times a day. You can follow me
@brooksha1

or on my facebook page, Holly Brooks - Dare to Dream

But back to being overwhelmed.

There are so many things to do, to read, to explore I don't even know where to start. Yes, Sochi is my second Olympics and yes, I was here just one year ago for the pre-Olympic World Cup yet things never hesitate to surprise me. 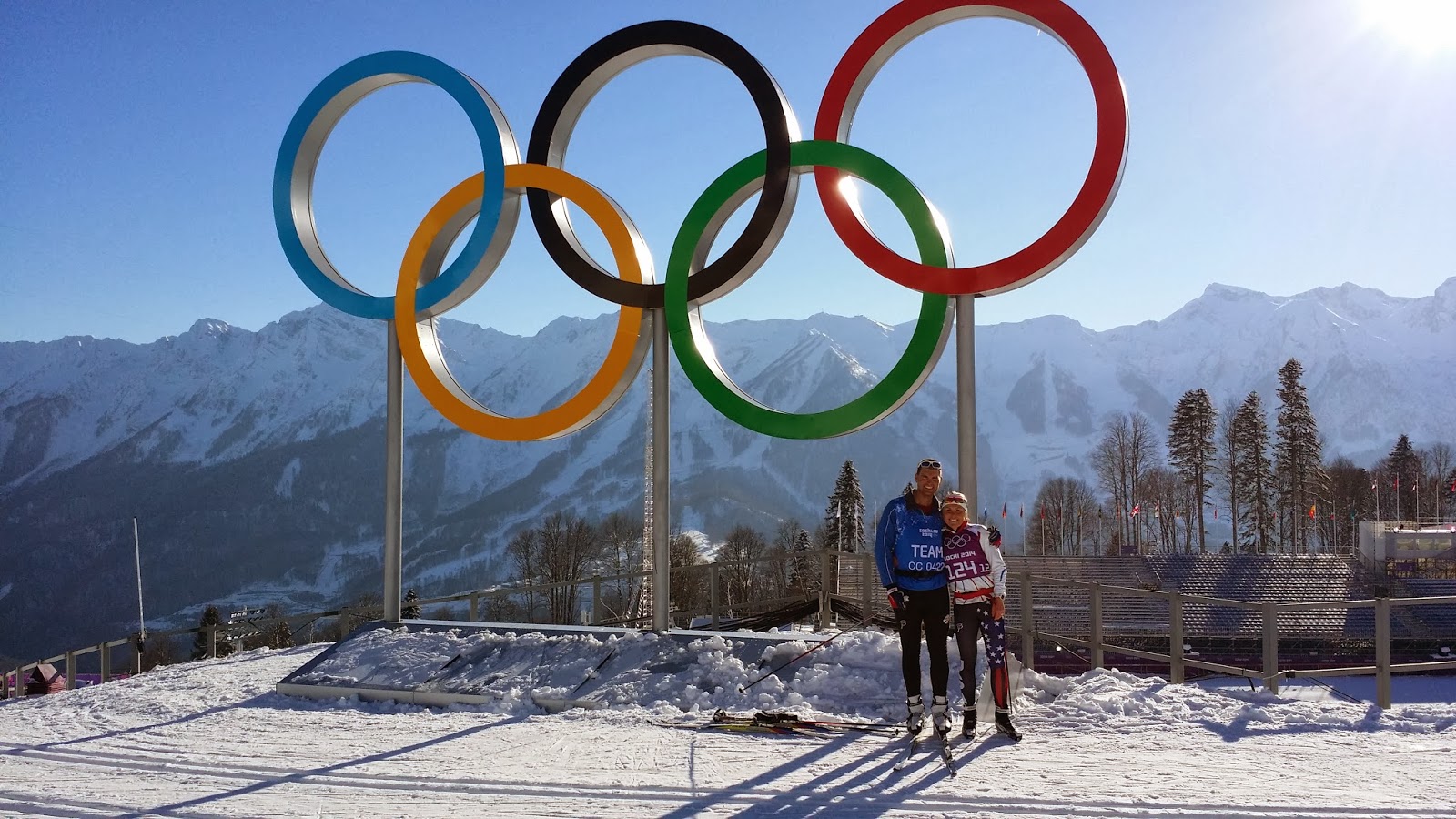 For all the negative press Sochi seems to be receiving our life up here at the top of a mountain (the "Endurance Village" they call it) is nothing short of amazing. In retrospect, our accommodations in Vancouver were tiny dorm rooms at the very least - here we have a grandiose "Chalet" that I believe Putin is planning to sell for top dollar once the Games are over. Luckily we have more than borscht and mayonnaise/hot dog potato salad to eat and thankfully, communication is much easier than usual "World Cup life" as the IOC hooked every athlete up with a world-wide phone. In that regard, it's funny to think how much technology has evolved over the past four years in that in Vancouver we had a dinky phone with ten minutes on it - now, in comparison we have a huge smart phone (actually the AT&T rep told us that it's a "Fablet" enthusiastically....) where we can call anywhere in the world, text, tweet.... Keep in mind I'm still dealing with a 13 hour time difference to home.  We also have a million and one apps from the OC, the USOC, the IOC, and everything Sochi to keep track of all the events, read bios of fellow competitors, register for guest passes, trade Olympic pins - literally anything Olympic you want. 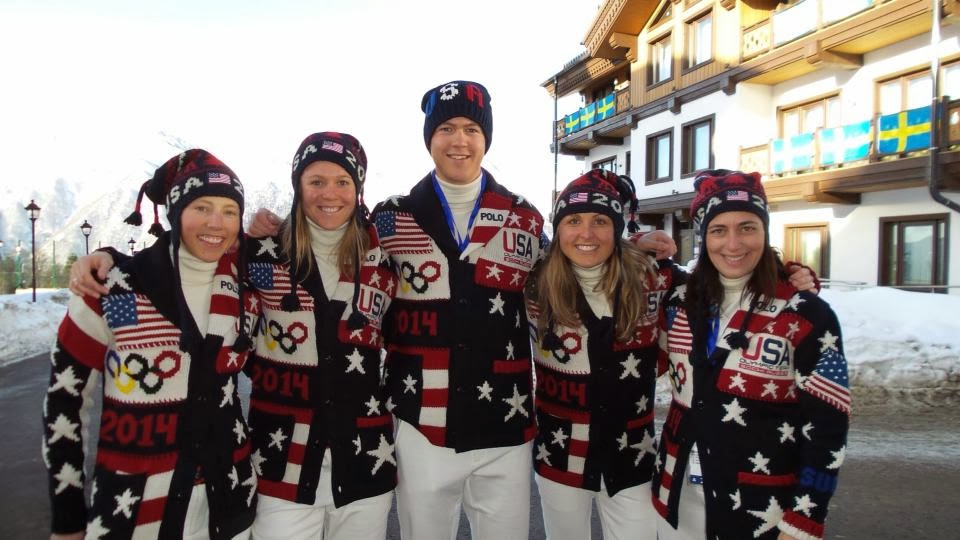 The infrastructure here in Russia, particularly at the top of our mountain is absolutely astounding. Over the last year I've been using the analogy of building the Olympics in the equivalent of Denali State Park. It's my understanding that there was literally NOTHING here to begin with and now look at it. It's a village up here, a self-sustaining city. The highway and train system from Sochi to the mountain & endurance villages alone feature a $9 billion dollar price tag. Here is a picture of Rob on our "hike" this morning on what we believe to the original road in the valley: 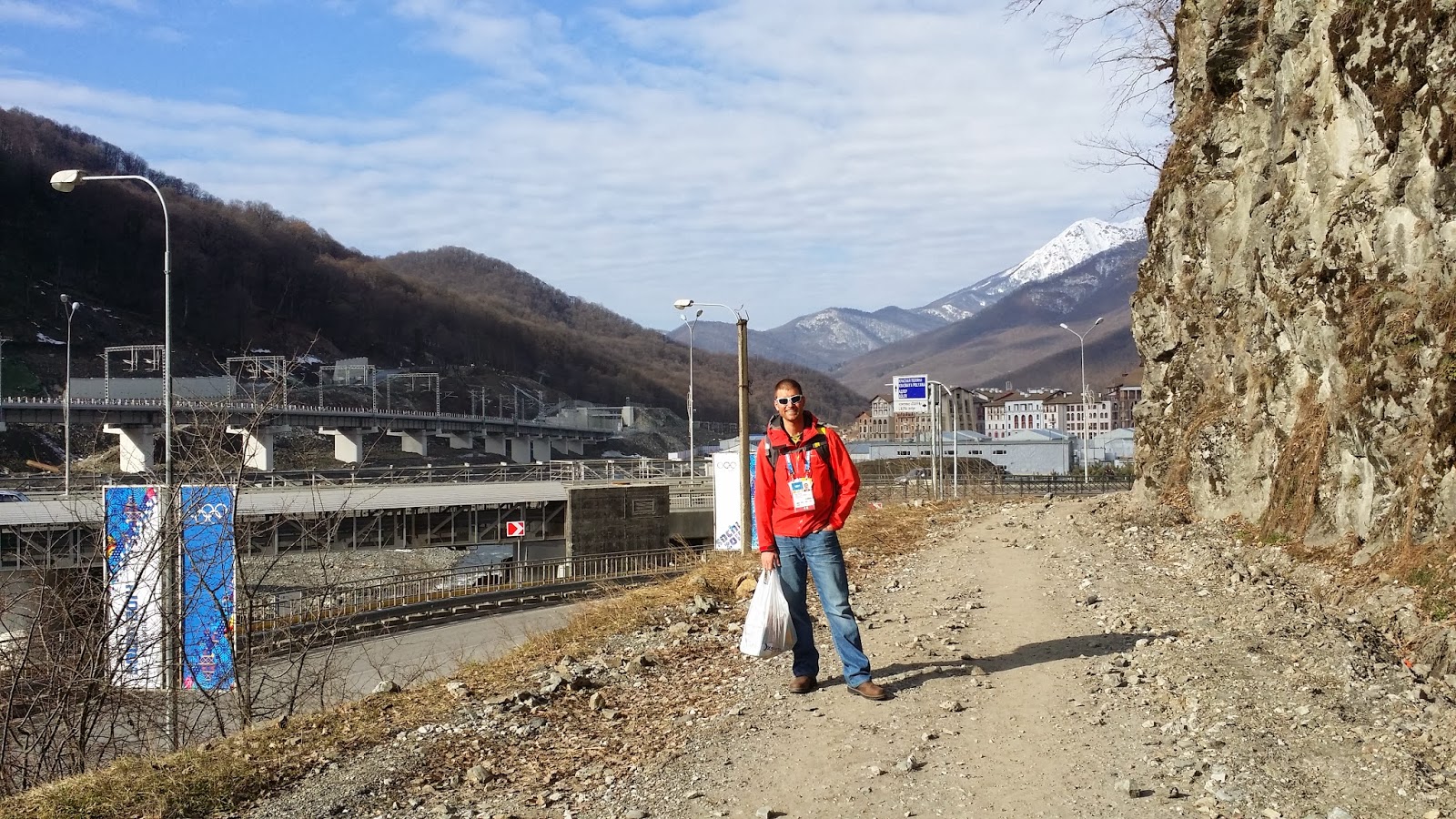 Last night I decided to venture "off the rock" as we call it. It takes a certain amount of energy to leave our world up here as we have everything that we need. Also, anyone that travels up to the Endurance village comes with the message that we have the best living accommodations so the motivation to leave dwindles.  That said, it was awesome to spend the night with Rob down in Krasnaya Polyana. He's staying at the NBC hotel in the valley and we took a field trip to a nearby mall. Here's Rob by a Russian Doll station... I was tempted to get one until Rob pointed out that it would most likely just collect dust on our shelves. 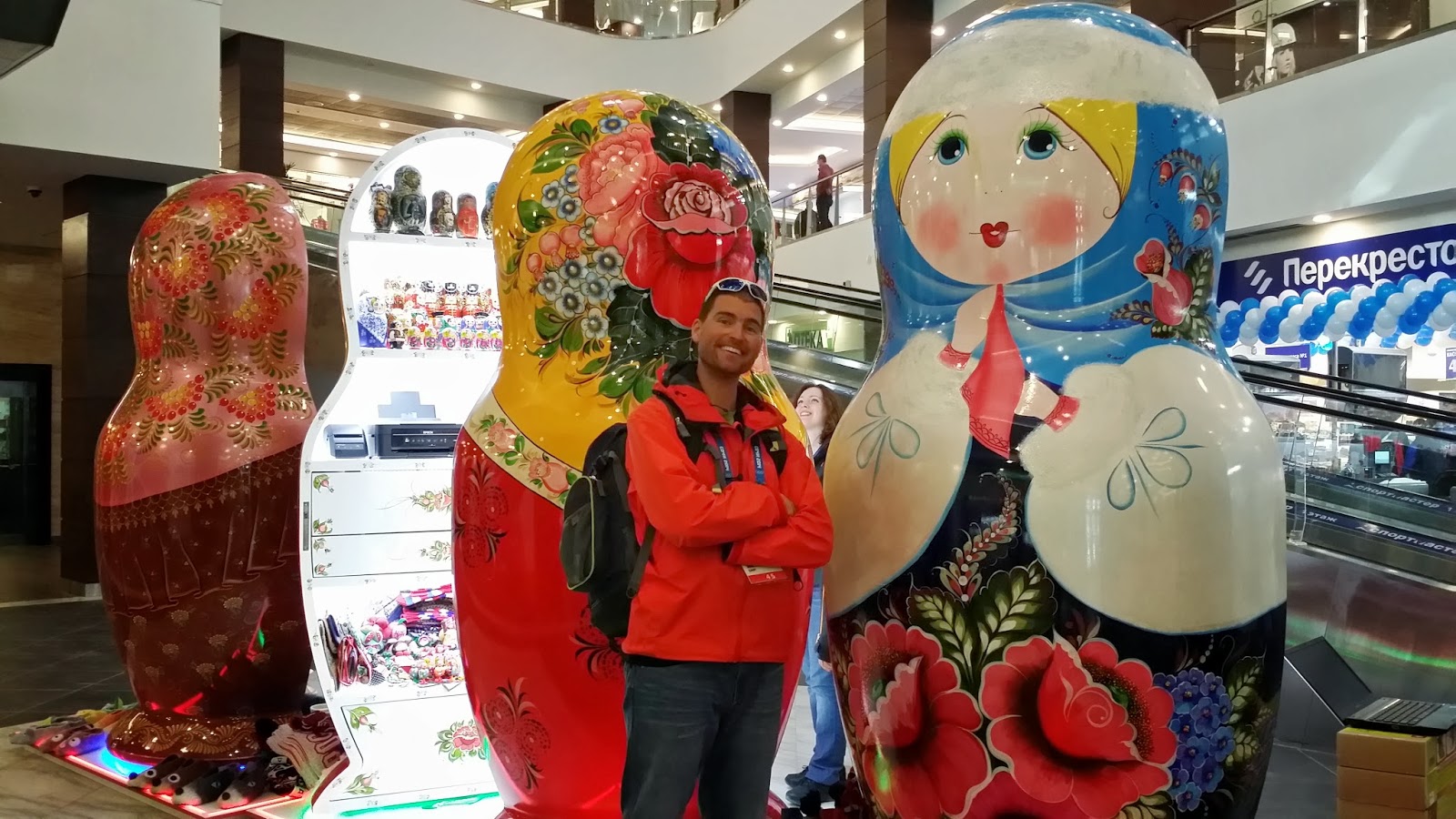 Security getting into the mall was odd. The entire thing is brand new so there were literally workers laying bricks. Some of the stores weren't even open yet.  I had to walk through a metal detector but they didn't even check my bag.  We also found a completely different entrance that was open and entirely un-manned.  There seems to be some serious loop holes and inconsistencies with some of these efforts, that's for sure. Not to mention that on the walk TO the mall you should look out for uncovered man holes in additional to looking both ways TWICE before crossing the street! (Cars don't stop for pedestrians.... yesterday Rob saw someone laying in the road after getting hit by a car.)

But back to the mall. On the fourth floor is the most odd thing of all - a BEACH. I thought there was a cardinal rule about not putting a pool on anything other than the ground floor but the Russians seem to disregard that small piece of common sense. This place was incredible and in all, approximately the size of a football stadium.  To begin with it had the most obscure entrance - it looked like a doctor's office. Then there was a single flight of stairs that lead up to this: 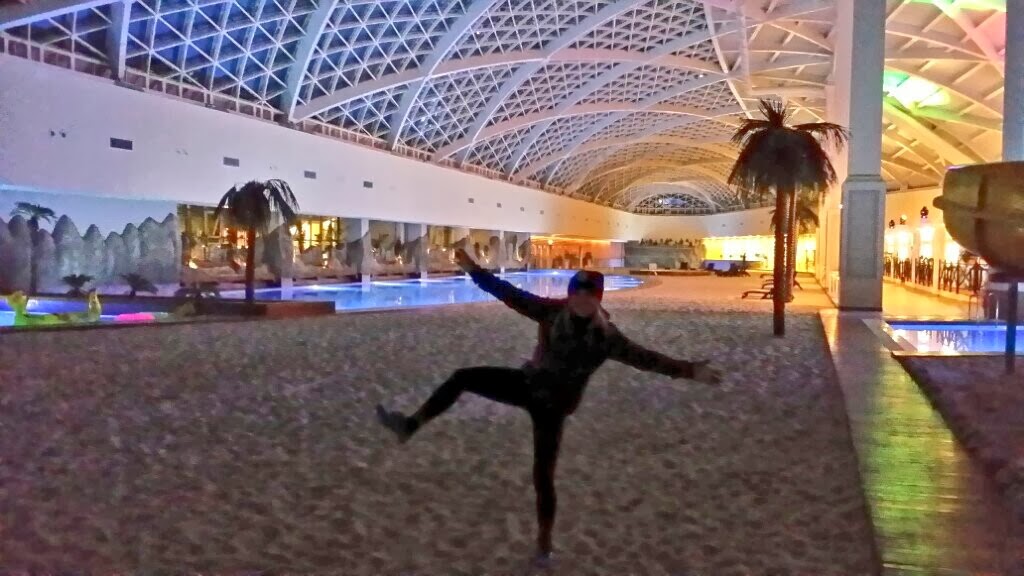 Rob and I were the only ones there other than a few Russians that appeared to be working there but they seemed just as dazed as we were. 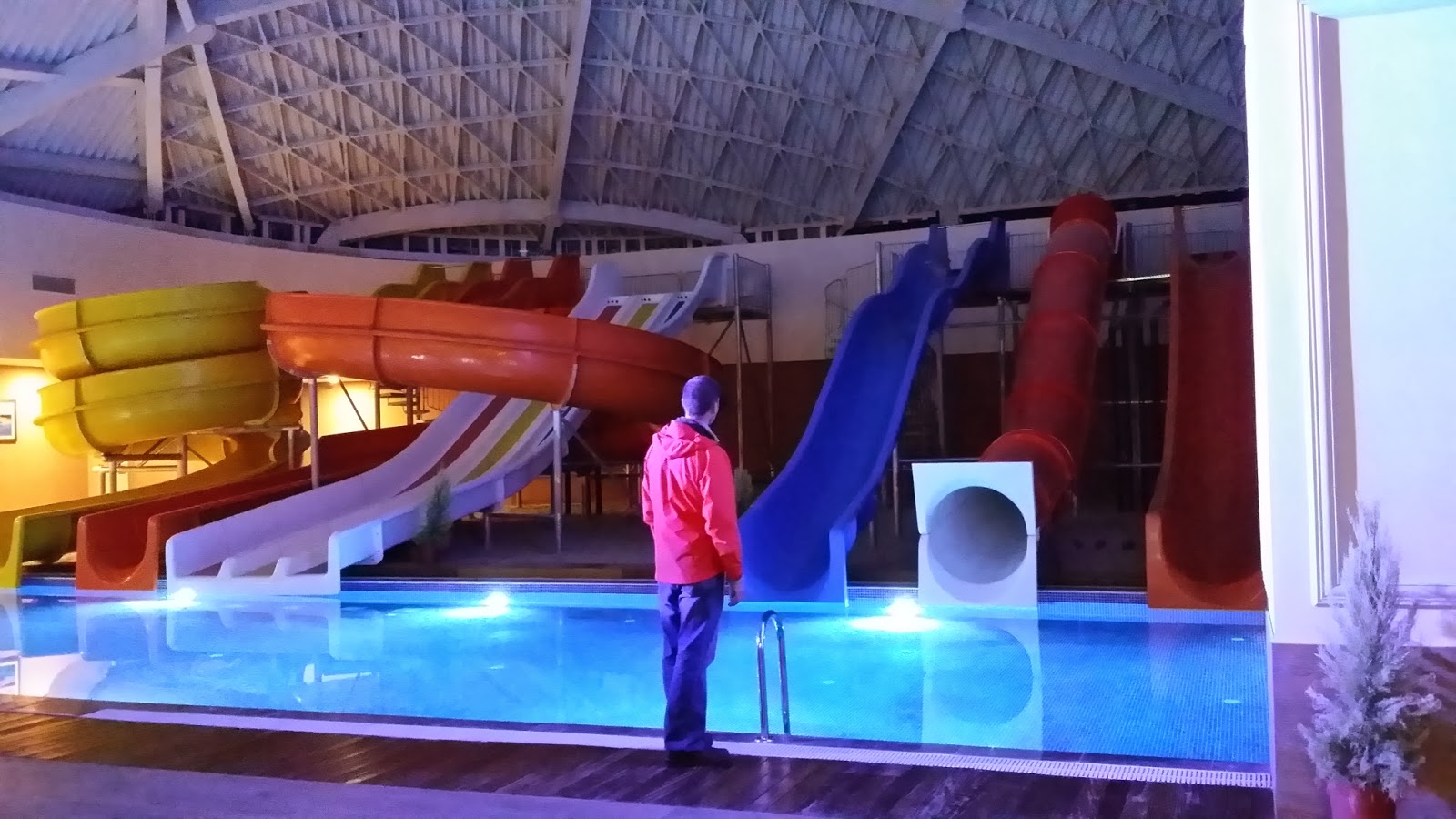 Enough of the weird stuff. So far I've had one Olympic race, the 15k skiathlon.  I have history with the skiathlon. You see, me and that race just don't get along. The race format is 7.5k classic, followed by 7.5k skate with a gear transition in the middle. I seem to be able to classic ski, and skate independently but when paired together it's incredibly tough for me.  Combine my least favorite race with the biggest hill on any World Cup or Olympic course and it's a recipe for a hard day. Luckily some of my teammates pulled the slack and my roommate, Jessie Diggins wowed by posting an 8th place finish for the best US Female Olympic distance result in history. 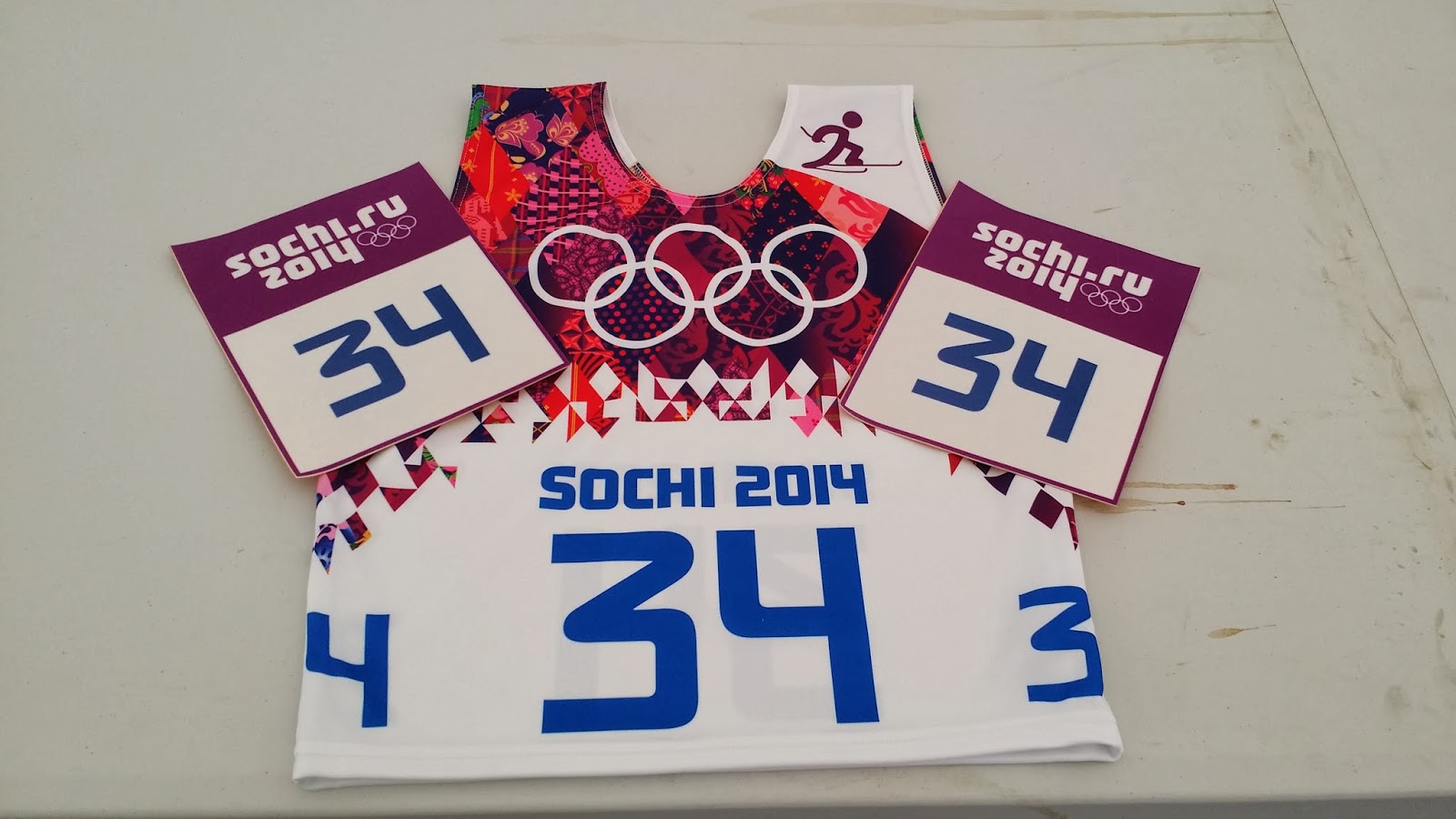 The Olympic race bibs are gorgeous

Lucky for me the Skiathlon isn't my only start here in Sochi. I'm hoping that my next race is the 10k individual classic race on Thursday, 2/14.  Tomorrow is perhaps one of the most exciting events for USA Cross Country, the skate sprint.  As many of you probably know my teammate Kikkan Randall is the favorite to win the Gold Medal. She is an amazing performer and I'm so excited cheer on our entire USA sprint crew! 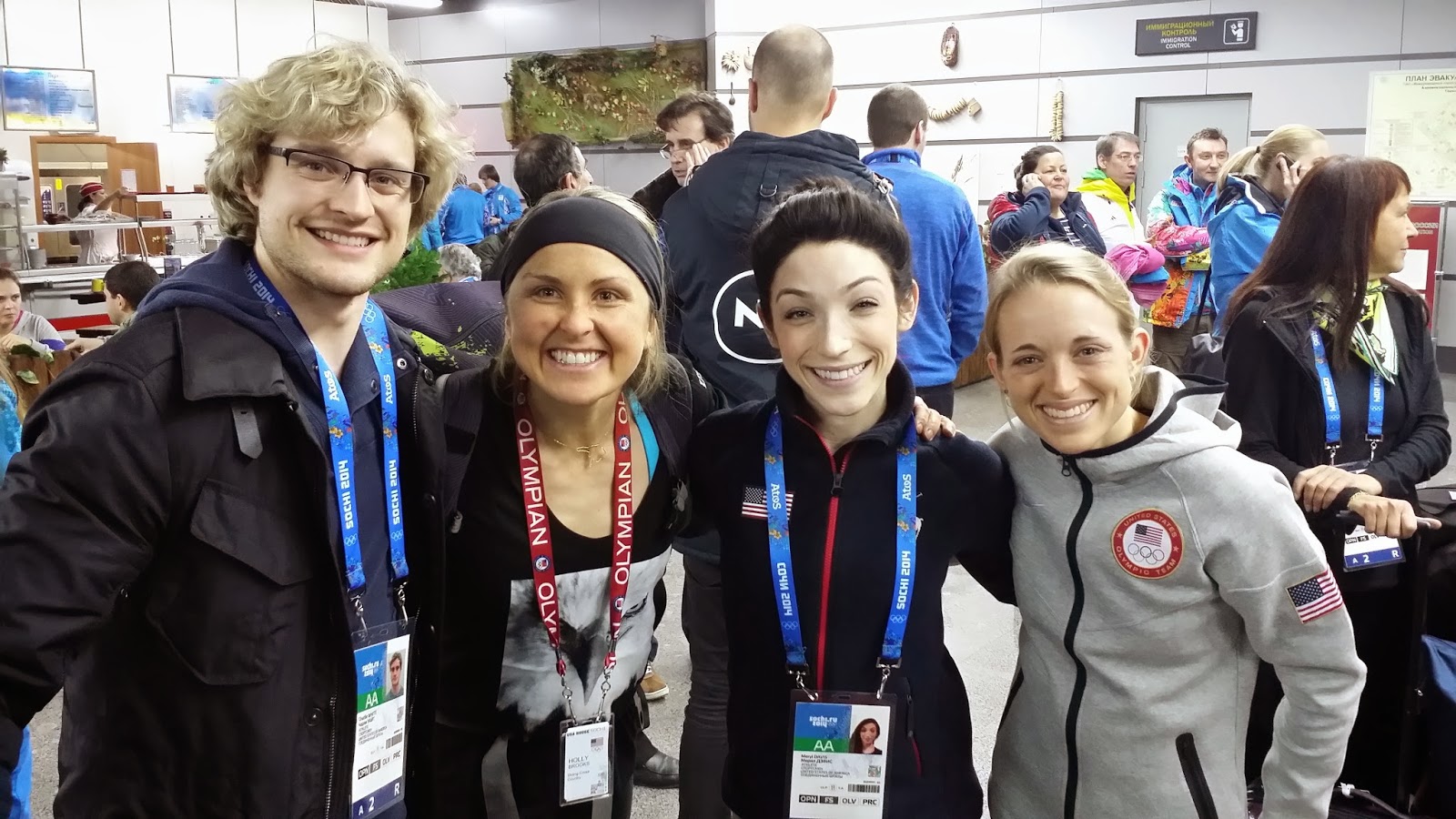 Liz & I with Charlie & Meryl - US Ice Dancers upon our arrival in Sochi!  One of the things I miss most about being the Endurance Village is interacting with athletes from other sports.  The Endurance village is just Cross Country and Biathlon, no other sports.  That said, it is fun to spend time with biathlon as our paths NEVER cross. I've had a blast watching some of the biathlon racers WITH the biathletes and getting the inside scoop from them! 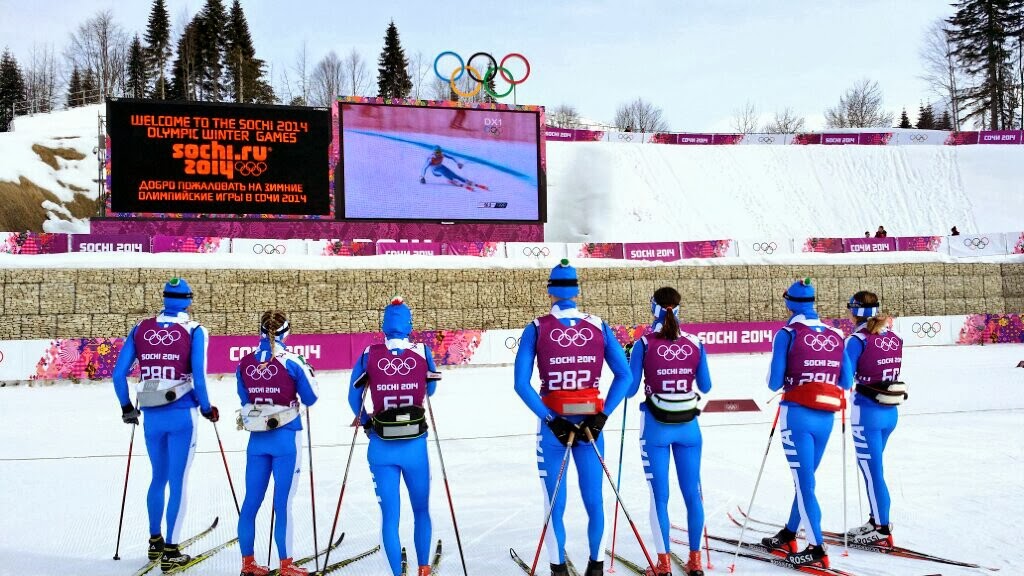 The Italian National Cross Country team takes a moment from training to watch an Italian Alpine skier competing literally across the valley.  It's super cool to have LIVE feeds of other sports in the Laura Cross Country Stadium!

Alright, that's it for now. I'm going to do my best to blog more frequently as I know that people all over the World are curious what is really happening in Sochi or in my case, up at the Endurance Village.

Until next time, thanks for all the support!
Cheers,
Holly :)