Preparing for Battle, AKA the Engadin Ski Marathon

Two years ago I came and raced the Engadin ski marathon and swore I would never come back without protection. Protection you might ask? Yes. Actually what I mean by that is that many of the top girls in World Loppet and Swix Ski Classic Marathons are skiing with male blockers. Domestiques if you will.  The last time I raced this race it was one of the more aggressive experiences of my life. The first five k was spent stepping over broken poles, Caitlin Gregg went down with a concussion (we later found her at the Sameden Hospital) and Morgan Arritola allegedly punched someone; a man at that. The problem is that the start is coed and there are simply too many people to make it a decent ski race.  The first ten k's are across a lake, directly into a headwind so the leaders can't escape and thousands of people are stuck behind them like a bottle of soda ready and wanting to explode.

So why did I come back?
This: 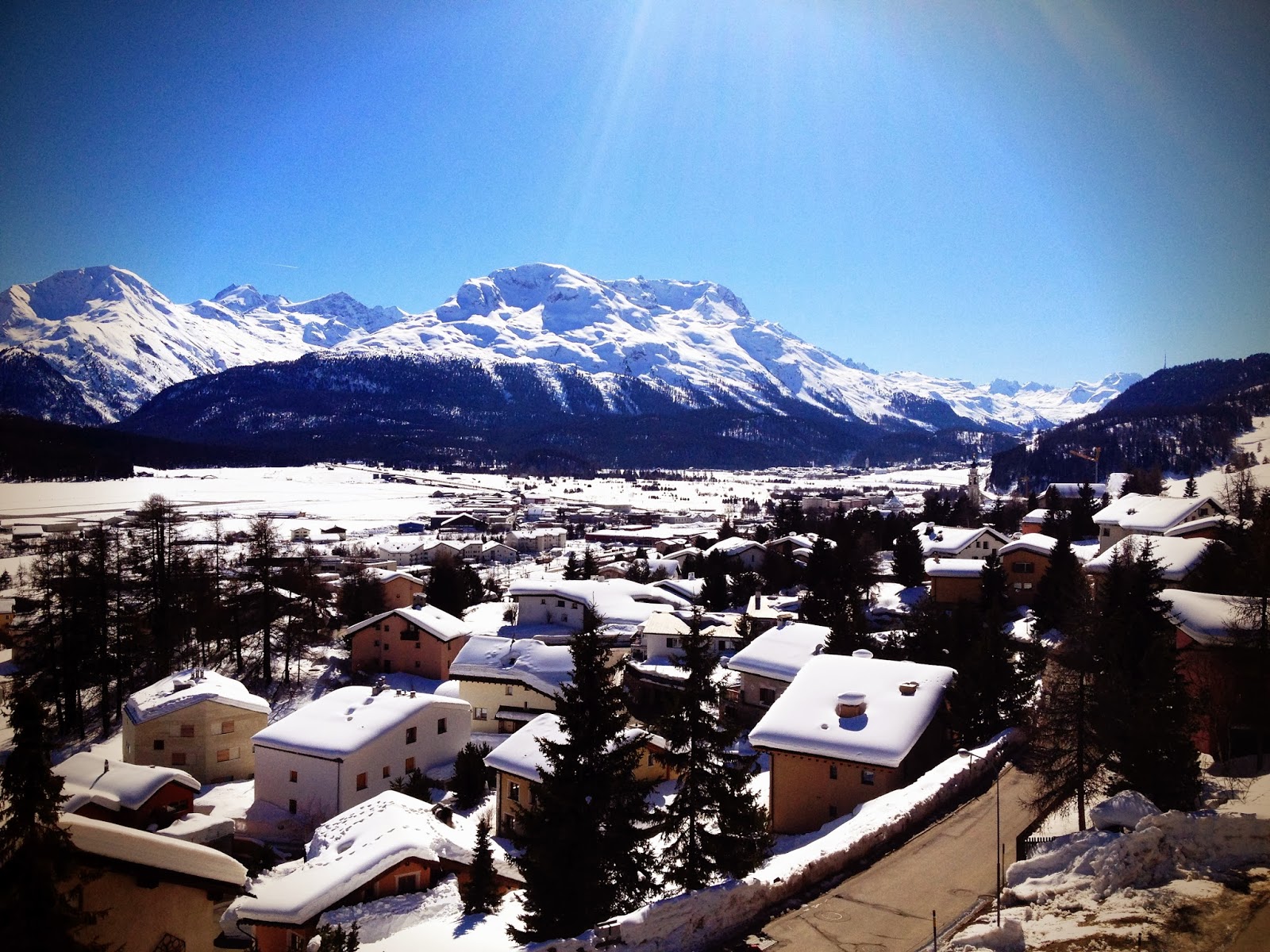 Switzerland is known for beautiful snow, mountains and sunshine. And compared to Oslo which has apparently had 15 hours of sunshine since Christmas it's a bit of a different world.  This is actually the view out the window of the apartment I'm staying in in Samedan. Good thing Sochi got me into walking shape! (the 1,000 owl figurines in this small studio apartment deserve special attention)

One thing that's cool about big marathons in that they often have spectator friendly sprints beforehand. Last night we had a night sprint in St. Moritz. You can't tell from this picture but there were actually lots of people there and the finish line was around the corner in the center of town. There was music and people were drinking beer and eating brats! 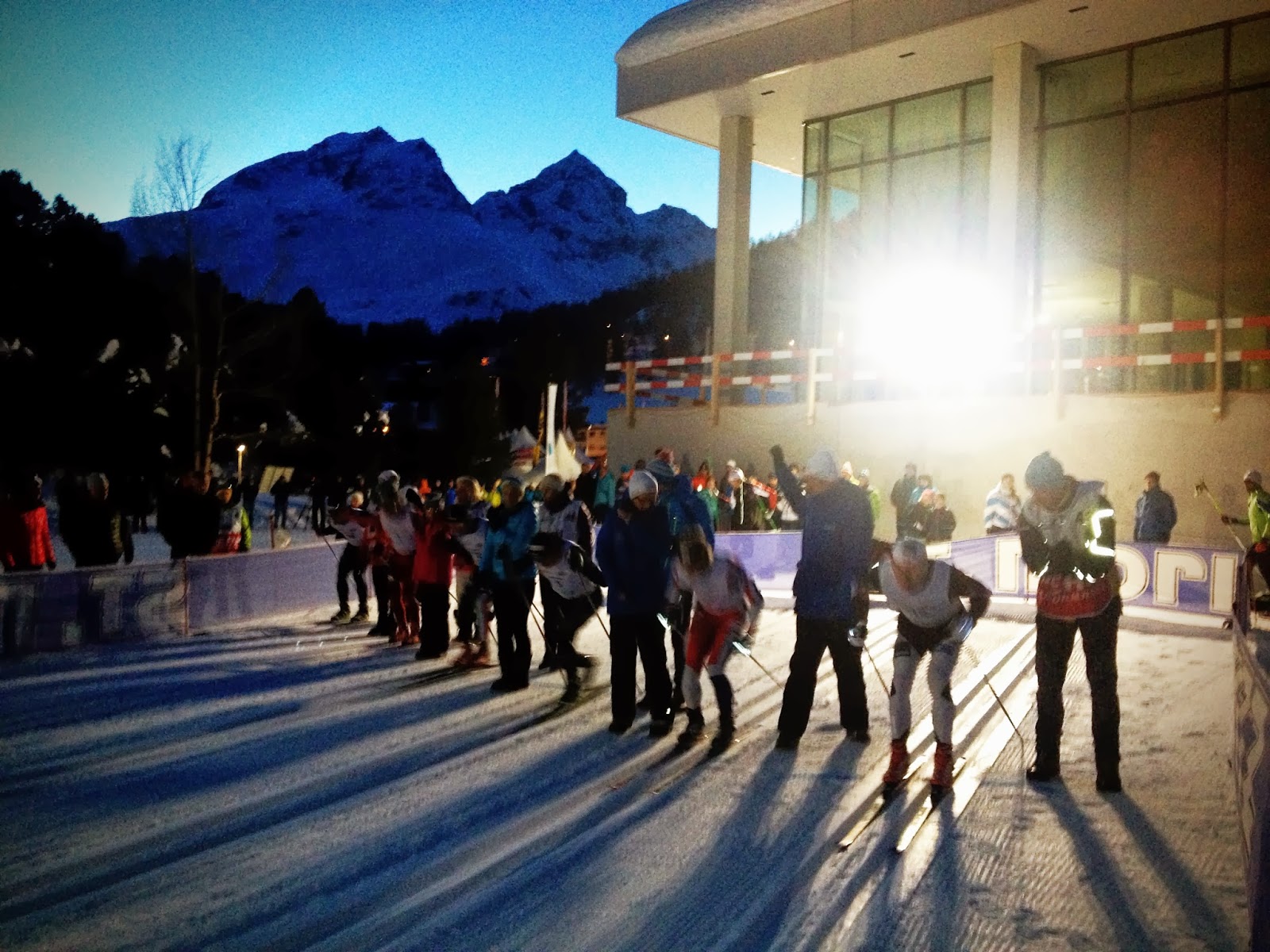 I even won some $! First dollar of the season, literally (unfortunately). It might even be enough to cover the expenses of my trip :) 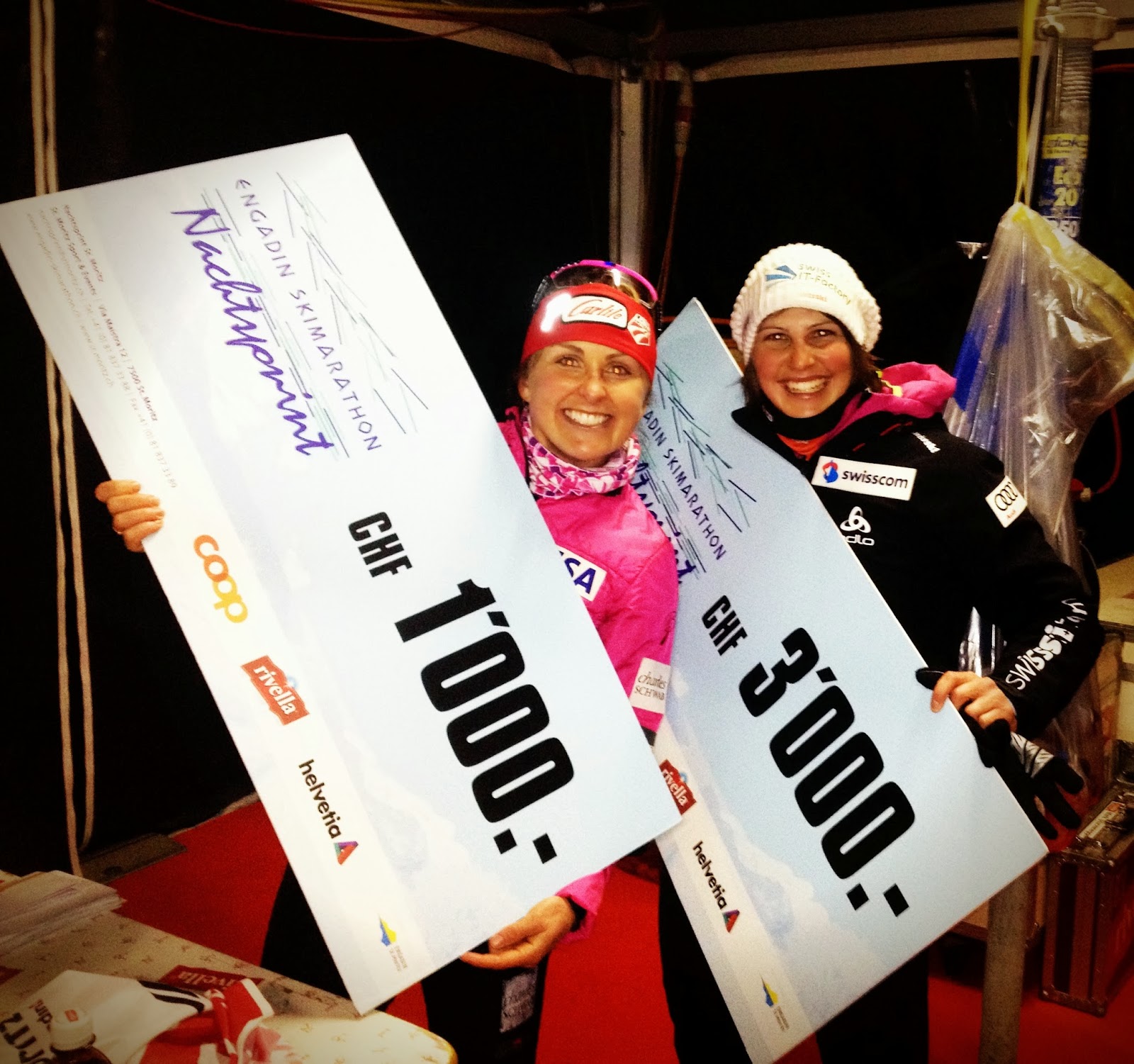 Congrats to Swiss local and friend Bettina for the win! 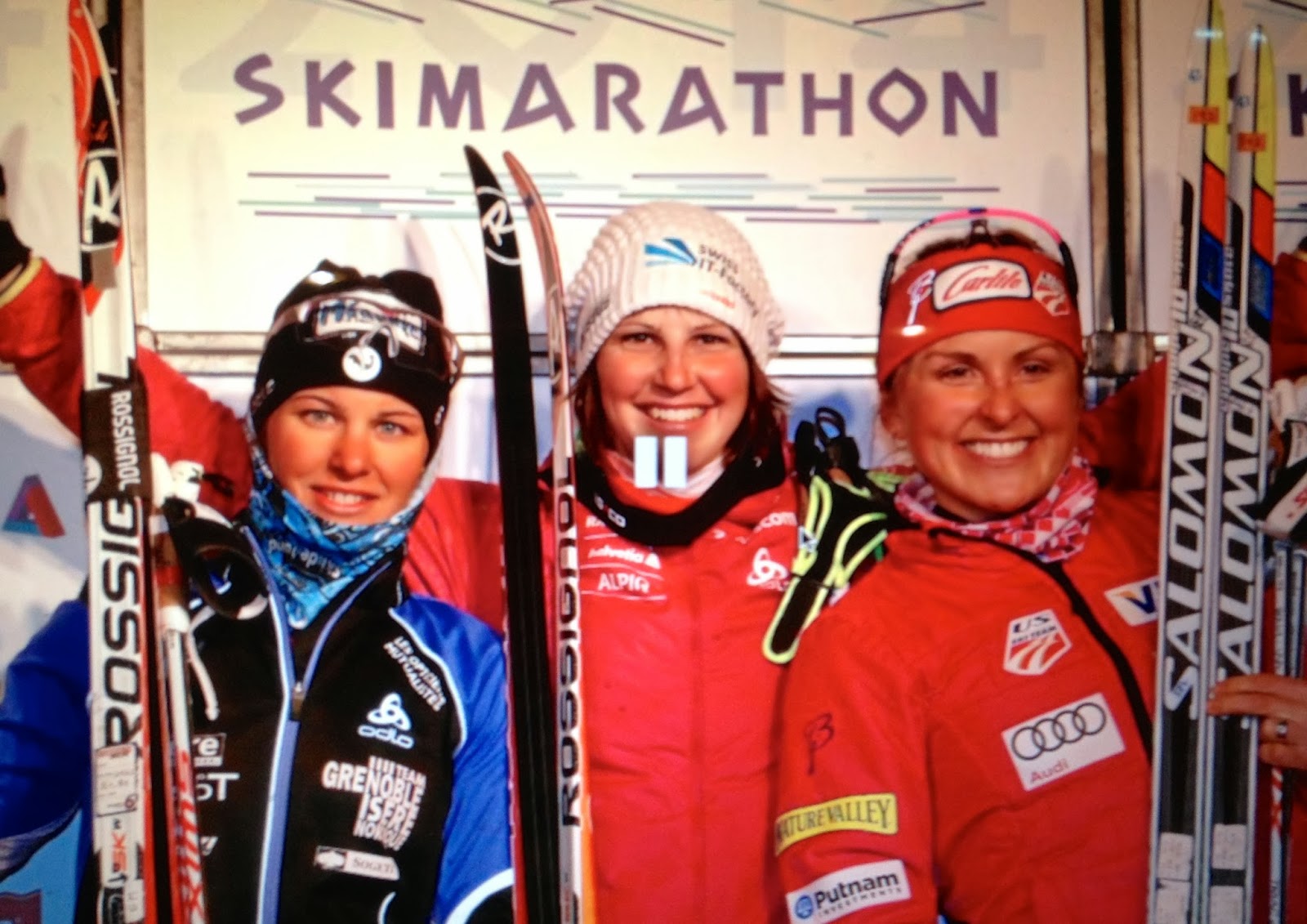 This season I haven't done a SINGLE race that isn't a World Cup and last night was a huge breath of fresh air.  The World Cup is really, really hard and if you're not 110% on top of your game. It felt nice to actually step on a podium for once! 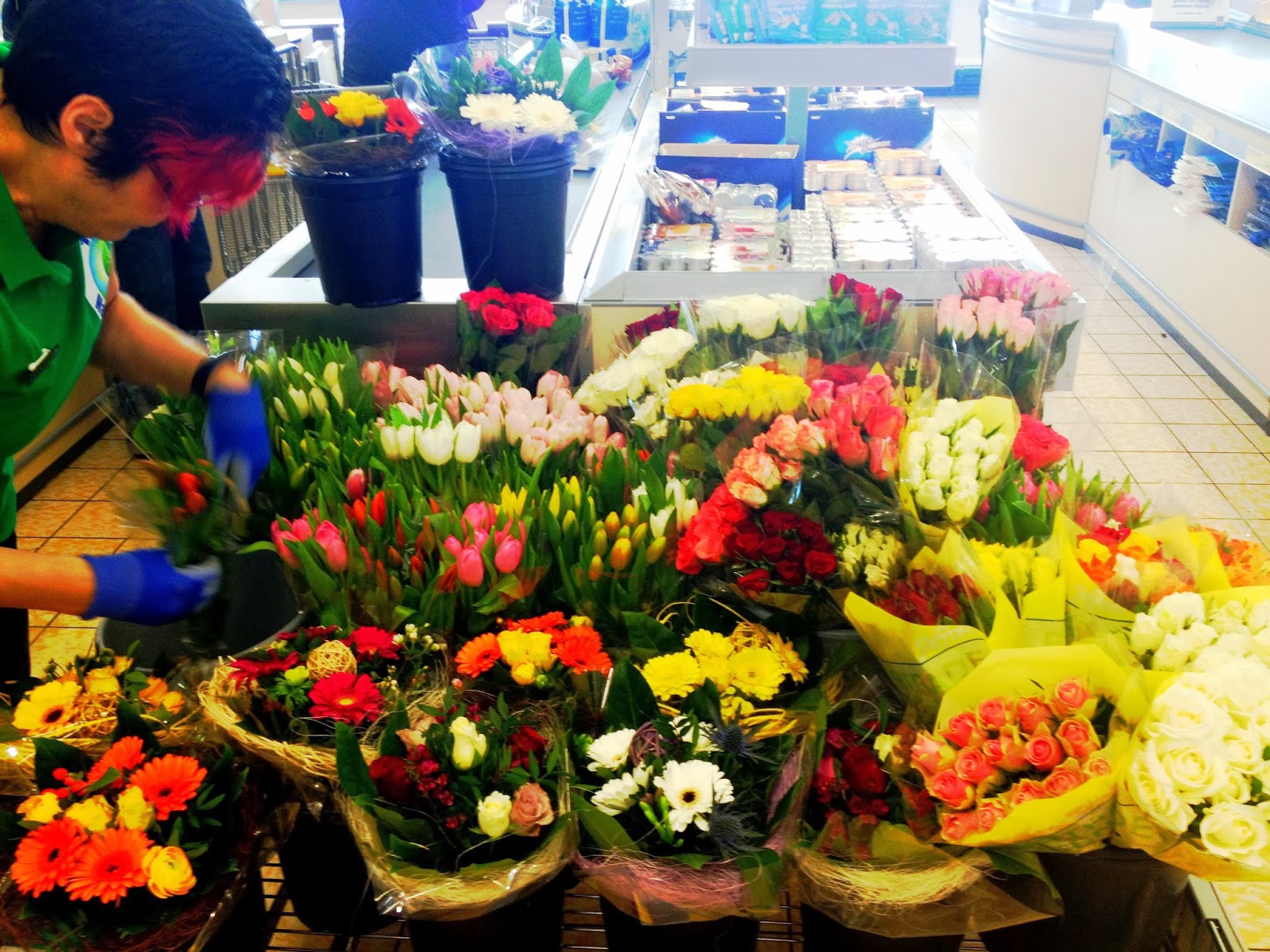 Another reason I absolutely love this time of year.... flowers! 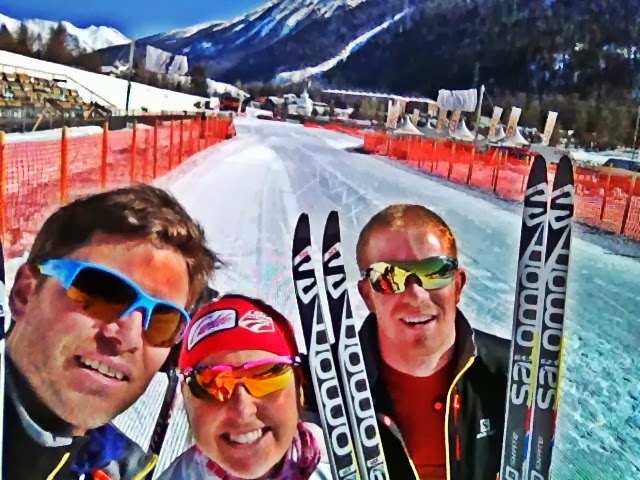 Thanks to Malone from Salomon and Matt Gelso for a fun morning of ski testing.  This is tomorrow's finish line, 42k's away from the start! 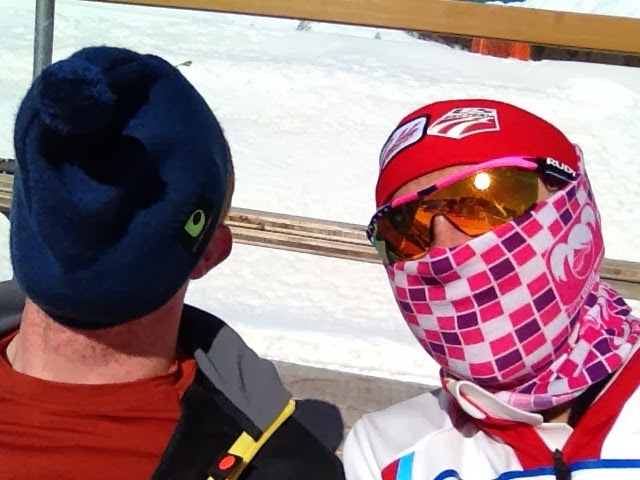 Matt and I waiting in the sun.... we didn't want to get baked so we improvised.

It should also be mentioned that Tony Wiederkehr helps host a sweet situation for a handful of athletes from the US. There is a crew here and Tony is our fearless leader. Tony's also got some big plans up his sleeve for his own race tomorrow.  Seattle folks, you're going to love this one! Stay tuned.... I can't spill the beans. In the meantime, if you're curious to learn more about this battle of a race, check it:

I'll let you know if I survive this in one piece!
Cheers,
Holly
Posted by Holly Brooks at 7:59 AM No comments: