Congrats to Simi and a little bit of honesty......

First things first.... I don't feel justified to write anything without first acknowledging the amazing accomplishments of my teammates.  Yesterday was a historic day for USA skiing as Simi Hamilton took the TOP step in the men's skate sprint in Lenzerheide!  This was the first World Cup Stage Win ever by a US Man and I feel this accomplishment has been a long time coming.  I hope that in a way this result can create a waterfall of belief - shattering the "glass ceiling" if you will.  Once someone tastes success it's much easier to believe in yourself and consider yourself a contender consciously and subconsciously.  Kikkan showed the US Girls what is possible and a cascade of success and good results have followed.  I think this result can provide the same confidence for the men's team. I am so happy for them! 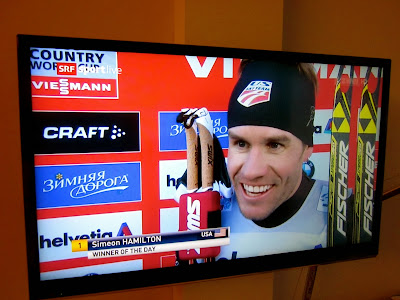 On a completely different note my winter thus far has not been so sunny or promising. I've been doing my best to keep my outlook (and my blog) as positive as possible. I've been trying to think ahead to opportunity rather than dwell on the past. I've tried to embrace the comment, "You have time, be patient, it will come around" that I've probably heard one hundred separate times now. But the truth is I am struggling.

In what I'd hope would be a great year  (the Olympic year) my results have been nothing but sub-par. Perhaps what hurts the most is to think about how much effort I've put into my sport... and the fact that it doesn't seem to be paying off.  Sometimes it seems the harder I try, the more diligent I am, the more I sacrifice the worse the results are. The past three years I've made steady progress.... I went from making the Vancouver Olympics as a ski coach to scoring points on the World Cup as Continental Cup leader, to being invited to race an entire World Cup season, to making the US Ski Team, to making the US Ski Team A Team and Distance Red Group.... While it hasn't been easy and there were huge bumps in the road (Think race the 9-stage Tour de Ski with a broken wrist) the trajectory has been up.  Thus, I expected nothing less from this year. I was careful to take a big rest in the spring before starting the Olympic training year. I had my healthiest summer and fall yet. Historically I've always skied well in period ONE and to be honest, I was surprised at how un-impressive everything I did was.

The thing about World Cup cross country skiing is that everyone is giving it their all. Everyone is dedicated. Everyone is trying so hard. But mathematically, it's impossible for everyone to win or for everyone to score World Cup points.  The truth of the matter is, when someone gets 12th place someone also gets 47th and 62nd.  When 30 skiers are in the points, another 30 are out of the points.  But perhaps that fight, and that reach for ambition is what keeps us coming back?  The saying is, if it were easy everyone would be doing it right.....  In the seven weeks of the season thus far I have witnessed people popping results. Take Simi for example. Three days ago he didn't qualify in the Oberhof sprint and yesterday he won. Small miracles do happen!  There is a lot to be said for keeping faith.

"You chances of achieving high-level goals and living joyfully are greatly enhanced when you focus on positive thoughts, positive images, positive visions, and positive lessons"

Last but not least, thanks to Sylven Ellefson for bringing this fabulous video to my attention via facebook:

Tomorrow I'll join the crew headed to Toblach, Italy for the 5th stage of the TDS, a 15k pursuit start skate race. Stay tuned to see what happens....