I'm sorry for the infrequent posts lately.... while I sometimes wish that life was as interesting as it was everyday at the Olympics, a big part of me is thankful that for the meantime, life has calmed down for a couple of days. 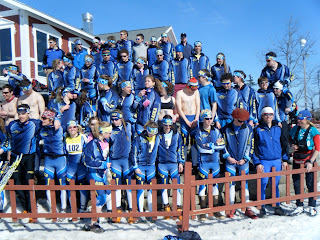 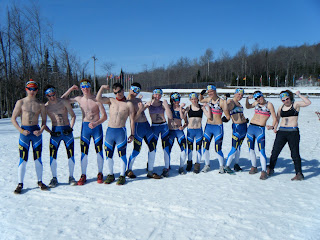 The kids wrote "Go Alaska" on their stomachs
I am currently in Northern Maine waiting.  There is really no better way to put it.  Last week, I coached Team Alaska Junior athletes ages 15-19 at Junior Olympics in Presque Isle Maine.  It took me four plane rides and a 1500 dollar plane ticket to get here so needless to say, going back to Alaska just to turn around wasn't in the cards.  Next week is the National Championship 30k Skate race followed closely by Super Tour finals.  That means four races in five days, "Tour De Ski" style. If you're interested in following the races or reading about the event the website can be found here. 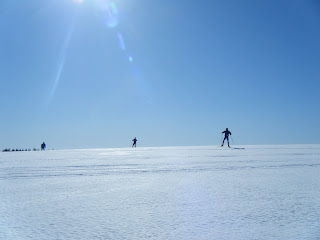 Crust skiing in the potato fields
Lots of people give Northern Maine a hard time.  It's rural, it's economically depressed, and they grow lots of Potatos around here. The pace of life is slow but to be totally honest, that is exactly what I needed.  My life is anything but slow at home in Alaska and sometimes a forced break is exactly what the Doctor called for.  (Actually, my Dr literally gave me a gift of fleece Pajamas after the Olympics with a note saying, "These are intended for you to get some rest in!") 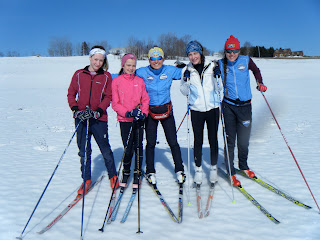 Crust skiing with some local girls - their first time!
I am currently staying in a house owned by a local ski enthusiast named Carl.  As far as I can tell, people like Carl make life more enjoyable for everyone but specifically skiers. He has done lots of really cool projects in the country including building a downhill ski hill (literally) by bulldozing a bunch of dirt into a big hill, purchasing snow making guns, and then a t-bar so kids at the local Caribou school could learn to downhill ski! His cabin (they call them "camps" in Maine) that we are currently staying in is decked out in pictures and thank yous from folks he's hosted over the seasons. Carl and family have been really generous and hospitable towards us and we are very thankful. 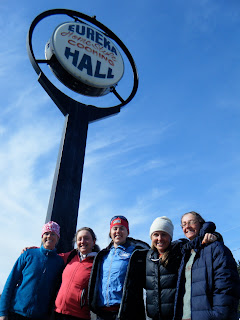 Nicole De Yong, Caitlin Compton, Becca Rorabaugh, me, Sarah Dominque
This morning we went to Eureka Hall, a local diner in Stockholm, Maine where you can get a great homemade breakfast for less than five dollars and homemade pastries for a dollar each!?!?! Afterwards, we took Carl's daughter, Anna and friends out crust skiing for their first time. Crust skiing is a great thing and it was very cool to take them for their first time. 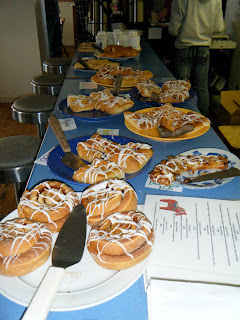 From here the pace will start to increase a bit. The rest of the APU team showed up and is enroute to pick us up now. We'll move into the rented "team house" and start to officially prepare for the races.
More to come soon. Thanks for reading!
~Holly :)
Posted by Holly Brooks at 6:32 AM 1 comment: