North Korea to Mongolia on Skis.....

North Korea to Mongolia on Skis..... 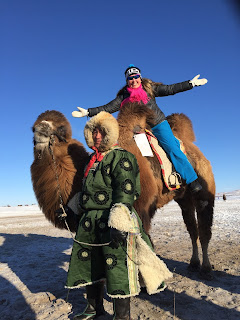 (This report was written for the Alaska Dispatch News and can be ready on their website too HERE although this post will include more pictures!)

Over the past 6 years I’ve been away almost more than I’ve been home. Chasing the World Cup and my Olympic dream often necessitated living out of a duffle bag. Yet, despite my extensive travel schedule I had never been to Asia.  This year, I decided, it was time for that to change.

When you think of Asia you most likely do not think of it being a Nordic skiing hotbed.  Yet, if you were to pull out a map and locate the next two Olympic venues you would notice something funny.  The 2018 and 2022 games are a relative “stone’s throw away” from one another when considering world geography. Just two years from now winter sport athletes will converge in PyeongChang, South Korea and four years later, Beijing, China. Yes, you read that right, Beijing, home to the 2008 Summer Olympic Games. Needless to say, the combination of upcoming Olympic interest and China’s prominence in international news headlines combined with my appetite for adventure sent me to the 2016 Tour de Ski China. 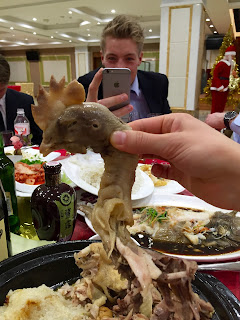 Food is always an adventure in a foreign place

The Tour de Ski (TdS) China consisted of 5 races in 3 venues and competitors from nine different countries including China, Russia, Norway, Sweden, Italy, Finland, Canada, the USA and Venezuela.  The first stop on the Tour was a city called Yanji which was oddly reminiscent of Sochi, Russia.  The hotel and surrounding area was 80% new, 10% active construction zone, and 10% dilapidated.  The five-minute walk from the hotel to the race venue featured piles of garbage, old tires, and pyramids of black coal, ripe for burning in the conveniently located power plant with fumes that wafted over to the gravel pit-turned-skate sprint course. Of interest at the race venue were Chinese soldiers handing out Red Bull, drones flying 5 feet overhead during the races, and horse-drawn sled rides. The other notable fact about Yanji is that it’s 20 kilometers from the North Korean border and we missed the supposed Hydrogen bomb by a mere 72 hours. All of the schools in Yanji were evacuated due to “seismic activity” we later read in the English version of the China Daily newspaper. 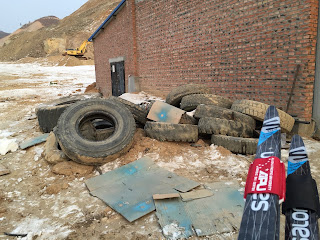 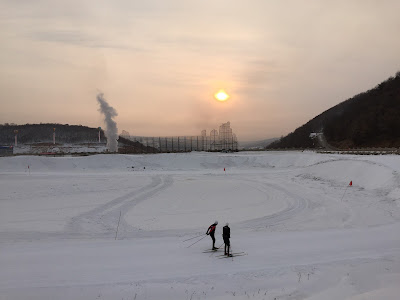 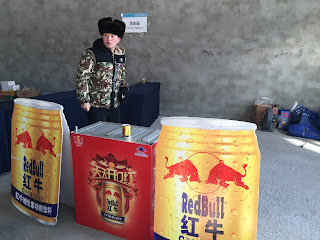 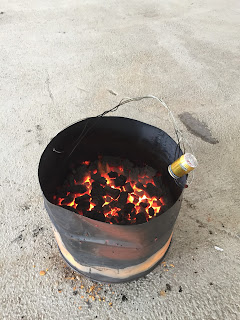 Warming stations inside of the non-ventilated "warming hut" 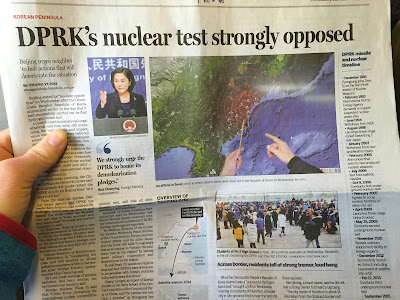 The highlight of the second venue, Changchun, was most definitely the Chinese Vassaloppet, a long distance classic ski marathon inspired by the original event in Sweden.  While the Swedish version trumps in participation, the Chinese prevail in grandeur and jaw-dropping awe.  Magnificent snow sculptures, some as tall as five story buildings lined the race stadium.  It was difficult to maintain composure and focus when double poling past fire-breathing monkeys, lines of elephants, and a dove with the wing span of half of a football field!  The sculptures were carved to perfection and when asked for a design, one of the workers pulled a crumpled napkin from his back pocket. I’ve been to Olympic stadiums and raced marathons around the world and believe me, this one was one to write home about. 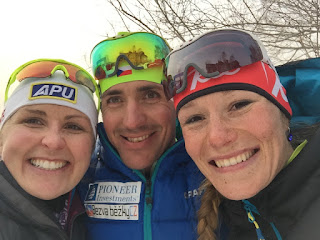 A highlight of the trip was being surprised by my Czech friend Petr & Adela who came for the Chinese VASA. They knew I was going to be there but didn't tell me and just showed up! 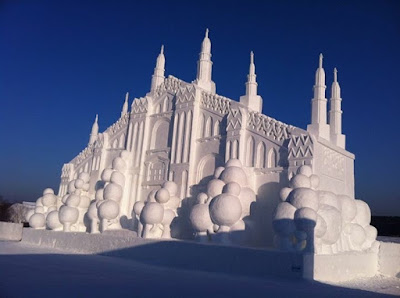 Our final race venue necessitated a 17-hour bus ride from Changchun to Xiwuqi in the Chinese province of Inner Mongolia (just south of Mongolia the country).  Most of the land we traveled through was arid and flat but I was pleasantly surprised to see at least three solid hours of wind turbines generating some of the energy for the 1.3 billion Chinese.

Xiwuqi hosted the final two races of the tour including a sprint race where I literally wore my warm up pants over my race suit because it was -15F and windy. While the ski races were a blast, the real highlight were the camel races. I felt as if I stepped into a National Geographic photo shoot with locals dressed head-to-toe in bright colors.  The camels were covered in thick coats of fur and looked very regal, yet were very wild. We watched relay races that included passing a spear from one teammate to the next. We even saw a man get bucked off a camel as if it were a rodeo. Of course I had to try too… 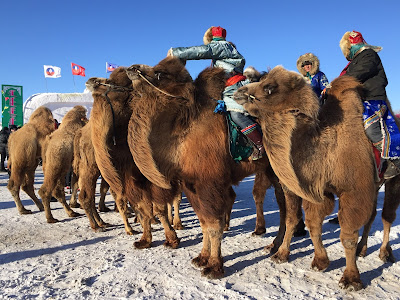 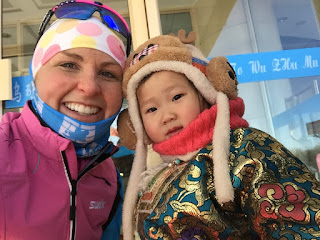 With one of the locals :) 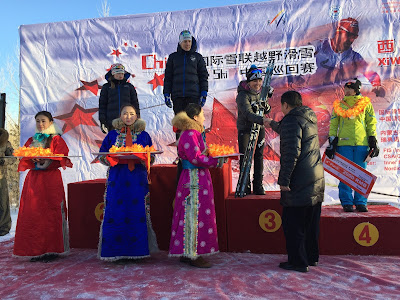 A shot from the podium

At the completion of the races the excitement didn’t end. We hung around Beijing to see the Great Wall and the Forbidden City. We had crystal-clear weather for both occasions after Beijing’s horrendous air quality made international news over Christmas.  Time after time we were told how incredibly lucky we were. 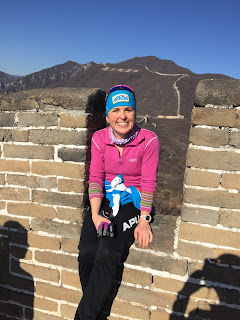 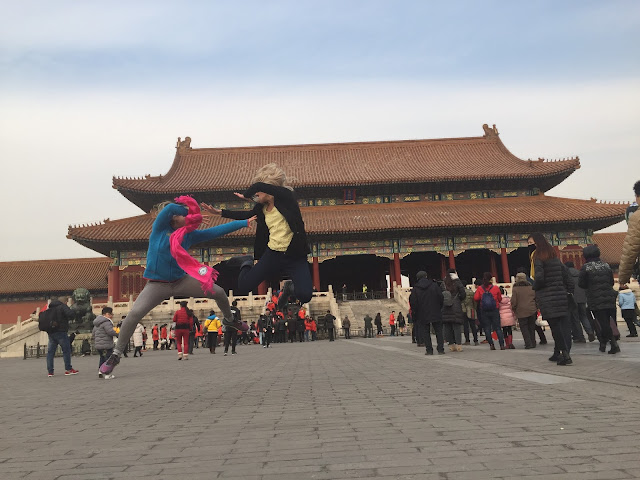 All and all the Tour de Ski China was a complete blast. I continue to be amazed by the opportunities my sport of cross country skiing grants me.  Now that I’ve finally been to Asia I’m curious to watch China build their cross country program for PyeongChang, Beijing and beyond. Luckily my visa is good for ten years so where there’s a will there is a way! 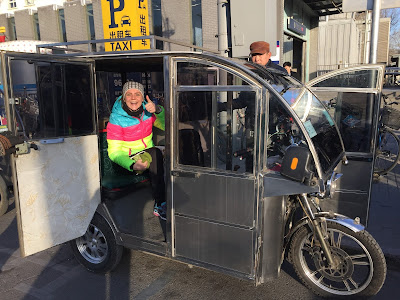 Benedicte and I had a great time riding in this 3-wheeler across Beijing. Our driver only got lost 5 times... 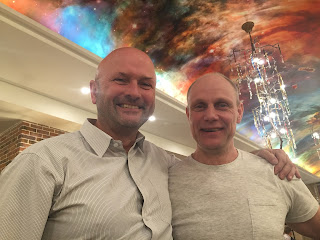 Last but not least, a huge thank you to Torbjorn and Janne from Nordic Ways who made the trip happen. These two are awesome! If you want to learn more about Nordic ways or better yet see Inner Mongolia for yourself their company leads some awesome supported Bike Tours in the area! Check out their website HERE for more info.