Yep.... woke up to snow!  Saturday, September 29th!  Some folks went skiing to round out the "ski every month" challenge.  Lauren and I went to run up the South Fork of the Eagle River.  Turns out running single track in fresh snow is a bit challenging.  Thanks to my Salomon Spikecross running shoes that kept me on my feet!  (Most of the time) 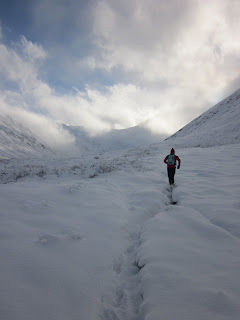 Running up the Hanging Glacier Valley 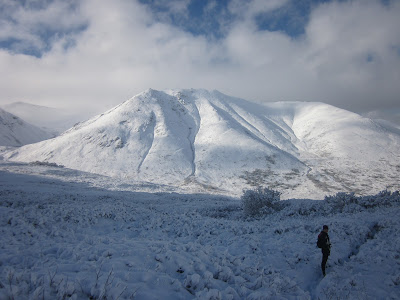 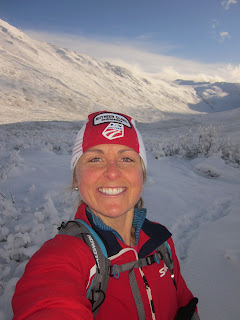 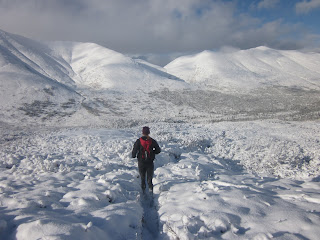 Beautiful snow and the first blue sky and snow we've had in a long, long time! 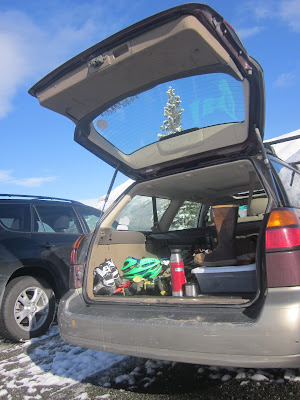 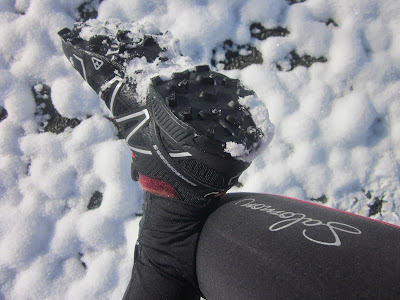 Salomon spikecross - these are great for wet, slippery conditions!

I'm off to Park City tonight for my much awaiting altitude camp, testing with the USST, and my good friend's wedding! If the weather improves here in AK, you can thank me for leaving :)

Posted by Holly Brooks at 12:36 PM No comments:

Okay, I grew up in Washington (Seattle specifically) but moved North to Alaska shortly after I graduated from College.  Since that day, I have considered myself closely associated with Alaska if not, purely Alaskan.  Many times this has put me in the position that many Alaskans constantly find themselves in - that is, constantly standing up FOR ALASKA.  I can't tell you how many times people have told me that the weather blows up here or that I'm crazy for living "so far away from civilization."  I've often responded with things like, "yeah but we can ski 11 months a year" or "yeah, but I LIVE on a ski trail" or "yeah but my friends are awesome and they ski too...."

So far, the month of September has slowly but surely taken it's toll on not only me but all Alaskans.  For the past couple weeks I have almost entirely run out of energy - or steam to defend it.  Instead, I'm looking at the forecast for Park City (where I will go for an altitude camp Oct 1), opting to ride my trainer while watching a run movie, or more often, gritting my teeth and getting out the door.  September in Alaska can traditionally be gorgeous; fall colors, crisp mornings..... but the past couple weeks have simply rained and the wind has blown.  South central Alaska is flooding and high winds the other day clocked over 130 mph which makes for some kind of storm and/or hurricane rating....

This picture basically sums up the last couple of weeks: 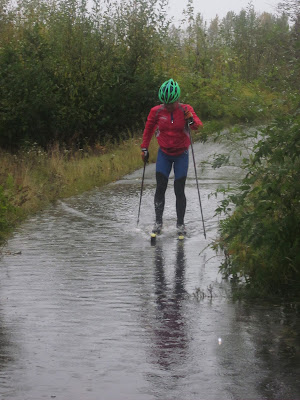 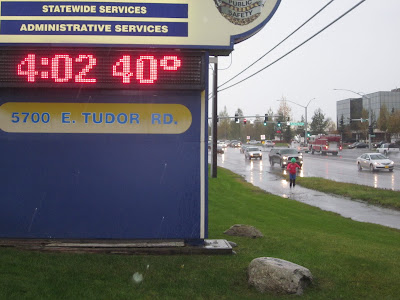 That's me - getting splashed by the cars, making my own rooster tail on the sidewalk & "enjoying" every minute of the dark, grey, 40 degree weather.....

Two weeks ago we had our massive windstorm and we lost power for four days.  Luckily we still had water and hot water but no electricity.... I was cooking with the camp stove by candle light!  Novel for the first day or two but after that it was getting a bit old! 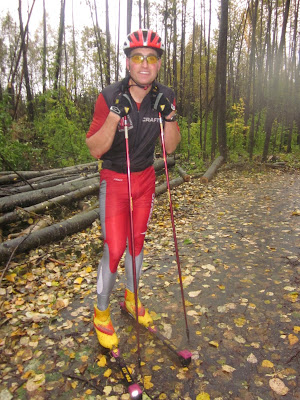 The other day Rob began to feel sorry for me.... he remembers roller skiing in the rain intimately and as such, he offered to join me on an afternoon training session. I know that he was hoping I'd say no - that he shouldn't join me but instead I jumped at the occasion.  What person doesn't want their spouse to have an intimate understanding and compassion for what they're doing? (I thought this mind lead to him cooking for me, giving me back rubs, etc....)  The first two minutes of the ski were fine until he started "coaching me" and telling me to "not ski like a wuss."  Well, we were on the connector trail from our house to the Chester Creek trail - and as you can see, it's covered in leaves and sticks - NOT ideal for "getting out over your skis...."  (Also, take note of all the trees on the side of the trail - those came down in the big wind storm and have been cleared OFF the trail...)  Right after Rob encouraged me to ski more aggressively he literally fell on his face.  After I could see that his injuries weren't serious, I busted out laughing. His fall couldn't have been better!  I will say that Rob lasted the entire 2 hours but when we rolled home, he told me that that would be his last roll for a very, very long time.  My thought - mission accomplished.  He got a great reminder of what it's like to be an elite ski racer in the fall! 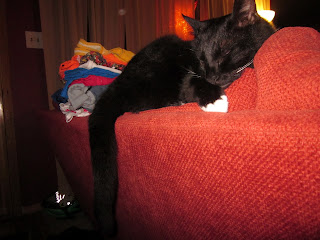 And... here is my cat, Buggz, the neighborhood hellion who doesn't even want to go outside (this is very unusual.) 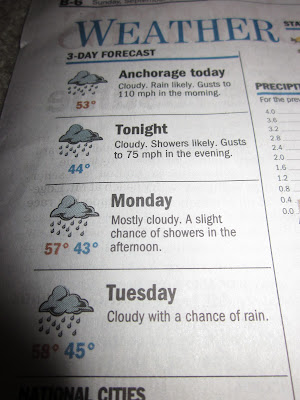 This is pretty darn typical.... 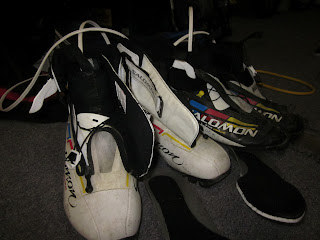 Boot dryers & multiple pairs of boots and shoes are essential as they never dry out in time for the next session....

Saturday my training schedule called for a 3 hour OD (over distance) run.  Rob, our friend Max & I ran  on the Johnson Pass trail, just the other side of Turnagain Pass.  Now, Max is from Aspen and he is up spending a few extra days in AK after the International Snow Safety Conference.  Max & Rob had visions of "some epic trips" but instead, he came for the worst weather in recent history.  Our three hour slog turned out to be possibly the wettest run I've ever had in my entire life and Max thought that he ran in more water that day alone than the rest of his life combined!  The puddles were literally up to our knees and frequent.  And no, the camera did NOT come along for fear that it would be ruined.  Here are a couple shots from the parking lot afterwards. 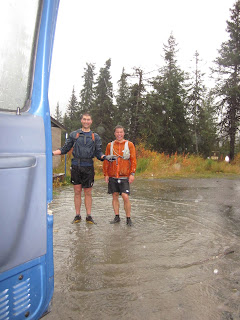 Three hours in a deluge? No problem :)  At least I'm still smiling at the end!!!! 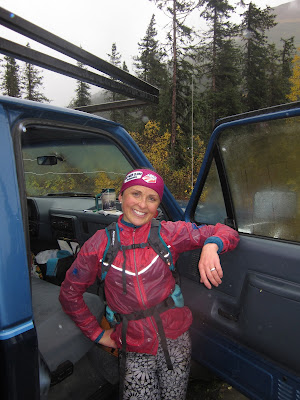 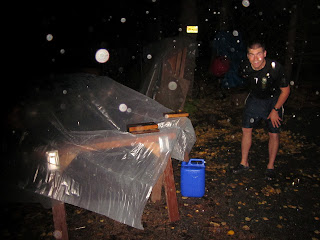 The entire town of Hope lost power therefore we couldn't bum water from our friends, the Christophersons.  Instead, we jerry-rigged a water entrapment system to ensure we had agua for morning coffee!

And.... just to give you a visual for the extent of the flooding in AK, here is a youtube video of Lowell Creek in Seward, AK.  This is just a couple blocks away from the finish line of Mt. Marathon:

There have, of course, been great parts of September as well. Here are a few other select pictures to spice up the grey shots!

Here we are helping out at the Anchorage elementary school running jamborees: 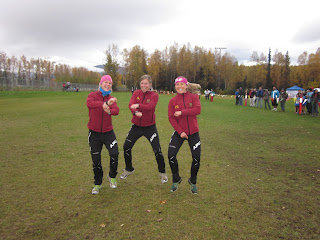 Some of the APU devo boys were the "rabbits" for the course, making sure that the kids went the right way.  For the actual races themselves they literally wore bunny ears! 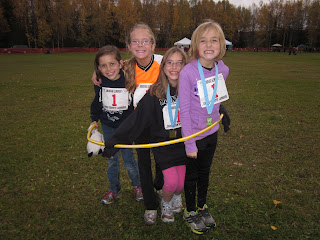 The running jamborees are a program within Healthy Futures whose goal is to instill active, healthy lifestyles in Alaska's youth. These girls all have their bibs (everyone gets #1!) and their medals. 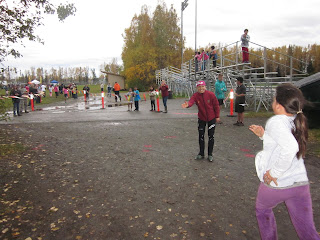 Cheering on every last kid! 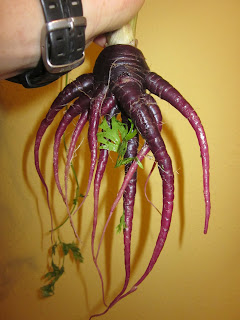 Crazy purple carrot grown in none other than the Cresap Family Garden! 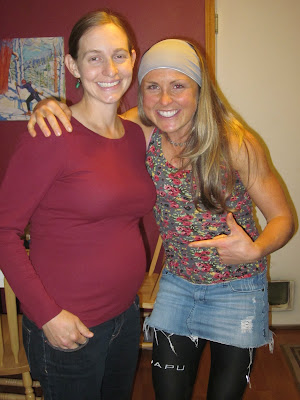 A wonderful visit from my good college friend Amy, her husband Joe, and the little boy or girl that is hanging out in Amy's belly!

A couple weeks ago we had the privilege of doing an OD in good weather... here are a couple shots of the "other side" in AK :) 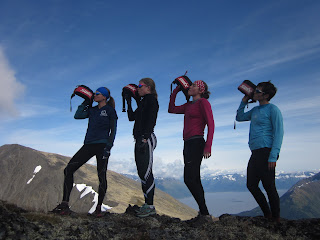 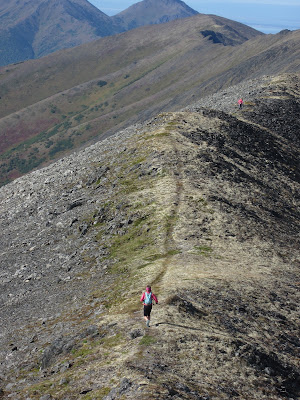 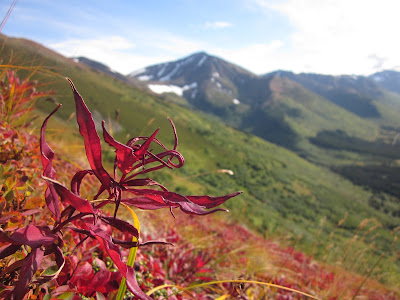 Yep... this counts as gorgeous! 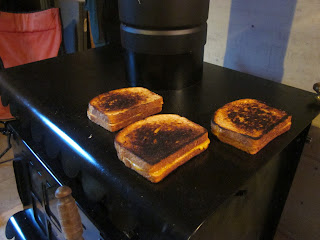 Nothing better than a wood stove grilled cheese after a couple hours of running in the mountains! 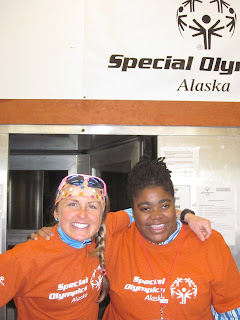 Volunteering with Special Olympics Alaska as one of their honored awards presenters!

Last but not least, this day was a special blessing.  Rob and I both have fairly irregular schedules and the mutual days we've had off together this summer can be counted on one hand.  Here we are taking advantage of a beautiful day in Prince William Sound helping a buddy check his shrimp pots!  (Thanks Joe!) 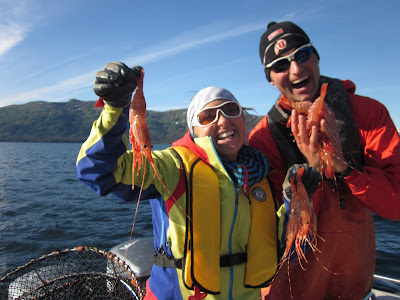 So, the short story is, we're hanging in there up here in AK.  I suppose the saying that "what doesn't kill  you makes you stronger" but geez, it sures takes a lot of energy.... and what I wouldn't do for some sunshine!

The countdown begins - exactly one week until altitude camp in UTAH. Bring it!
Cheers,
Holly :)

Hey ya'll! We're halfway through September but all this stuff still applies!  If you want to check out my training notes for this month (or just this period of the year) go to my monthly guest post on XC Ski Girl's blog here:

I know that some of the pictures look awesome and our girl's ridge run was fantastic.  There have been some other great workouts and a day or two of sunshine but otherwise the weather the past couple weeks in AK have been "trying" at best.  Between a four day power outage at my house (cooking on a camp stove) and flood level rain I'm certainly looking forward to our altitude block coming up in Park City.


Posted by Holly Brooks at 3:56 PM No comments: