One down, more to go

Well, the first race is over... officially.  I wasn't nearly as nervous as I could have been...after all, it was the Olympics.  Just the world's best skiers!!!!  In the Canmore World Cup I remember the announcer saying, "this will be live for 100 million viewers overseas"  Well, there are probably even more viewers for the "big show."  Oh well - my motto was, smile at the start camera and ski as hard as I could. The "secret" if there is one is that this was just another ski race.

(By the way.... I cannot officially post any pictures of the ski race itself - either of myself or anyone else. There is a rule to protect NBC's sponsorship of the event. While it initially sounds like a bummer, it's important to protect sponsor's rights because they make the Olympics happen!) 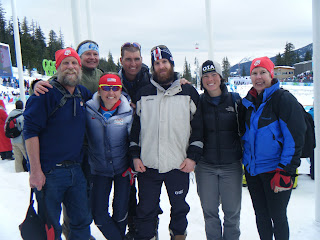 Left to right: Dad - Don, Friend - Chip Treinen, Me, Husband - Rob, Brother-Scott, Sister-Robin, Mom-Chris.
The race was two laps of 5 kilometers. The conditions were actually perfect.  Yesterday, they salted the course and it was TOO hard. The days before it was super soft.  Today was a happy medium. I started conservatively because the last two 10k skate races that I've had I've started really hard and fallen off my own pace.  I haven't seen any splits but I have a feeling that I skied pretty even laps. Skiing through the stadium was awesome but one disappointing part was that there was many parts of the course with absolutely no one. The top of the course was the hardest because it was gradual uphill, long, and absolutely no one was there.
I can't say that I'm overjoyed with my result - 42nd. I was middle of the pack.  Who doesn't want to do better, myself included?  But, I find it important to remember that this was just my third International race, the first and second which were one and a half weeks ago. Many of my competitors are fulltime athletes, most which have a plethora of International experience including support from their national teams. Ten kilometer skate has not been my strongest event recently and I hope to improve upon my results later this week. It would be SWEET to have a top 30 on Wednesday and qualify for the sprint heats.  We'll see! 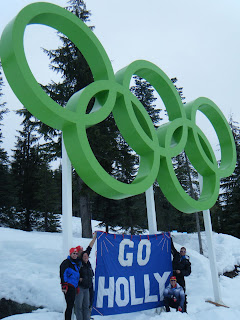 Thanks to my mother-in-law Sue who made this huge handmade surprise banner!  There was surely some other good fanfare at the event including the Dario Fan Club.  The Swiss skier took Gold today with a smashing time a full 24 seconds ahead of the silver medalist! 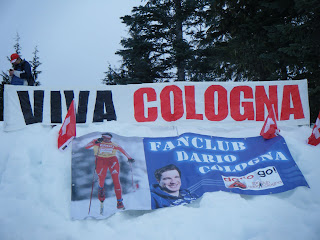 A couple of other things that happened today:
*During my warm up I saw one of my college coaches, Tom Olson who came out to watch the race.  Tom was always wonderful to me and the rest of the ski team at Whitman and I owe a lot of my experience to his hard work. Tom - it was GREAT to see you out there.
*Seeing my family and Rob was great too.  Rob actually came into the athlete village for dinner. He was awestruck by the temporary dining tent (the biggest, white plastic structure that you've ever seen!) and most of all the amount of food and the choices offered.  His comment was, "Its a good thing I'm not eating here everyday - I would gain 10 pounds!" If you know Rob this is very funny....
*We came up with the next phone application that someone should invent. Have you ever heard of schazam (sp?) the application where you hold your phone up to a song and it will look up the title of the song and the artist?  Well, we wish that an application existed where you could find out what sport different athletes belonged too. I suppose if we were really that curious, we could ask them!
*I heard that I actually received decent NBC footage today but haven't been able to view it myself.  Funny enough we aren't authorized to view NBC videos because we don't have an IP address from the US.  I guess the USA Team house doesn't count?!? 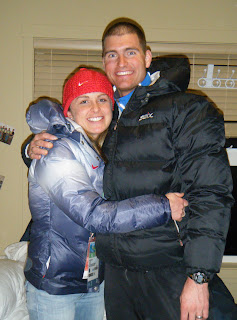 Rob and Holly in the "dorm" room
Well, that's it for tonight. Thanks for following. Tomorrow I have training on the classic sprint course. I'm looking forward to skiing klister tomorrow! (Probably)
Good night and thanks so much for all the support - you guys are the best!
Holly :)
Posted by Holly Brooks at 11:29 PM 6 comments: