I wanted to talk about this article in my "Wednesday" post but I think it's deserving of it's own, stand alone post because it is so DANG important - no matter what you do.

My mom actually sent me & my siblings the link to the article. So often I skim this stuff over quickly, not giving it a second thought but this one in particular resonated with me. It hit home as an elite athlete about to start the race season - about to get measured... waiting to slide into my one-piece spandex suit, pull a number over my head & pour my heart out on the trail getting a time, and hence a ranking. This ranking will show how I stack up against the rest of the female elite cross country ski racers in the World. It will also show how I "rank" on my own team, the US Women's Cross Country Ski Team.  This is extremely relevant because we are a result driven sport.  Results are how you make teams, get sponsors & earn funding. In all reality, results determine (some) of your future.

Seeing that this is an Olympic year there is theoretically more on the line than most years.... think goals of making the team, being granted one of the four coveted race starts per race, being chosen for relay teams that stand the chance of making history......

I know that many of my goals this year are result-oriented, quantitative, and high reaching. That is what makes the 13 points in this article so important. General themes that I deciphered from my read of it are resilience, the ability to look towards opportunity rather than resent past actions - the ability to think independently and constructively - and to not beat yourself up.  I expanded on the 4 points (of 13 total) that I thought were particularly relevant to my life as a ski racer but I urge you to read the full article and apply the advice to your life as a teacher, a husband, a manager, a friend. 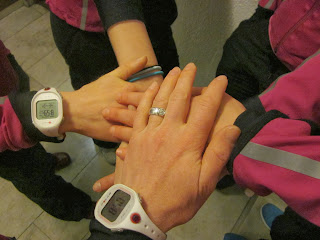 Just a reminder, these are thing successful people DON'T do...

1.    Waste Time Feeling Sorry for Themselves. You don’t see mentally strong people feeling sorry for their circumstances or dwelling on the way they’ve been mistreated. They have learned to take responsibility for their actions and outcomes, and they have an inherent understanding of the fact that frequently life is not fair. They are able to emerge from trying circumstances with self-awareness and gratitude for the lessons learned. When a situation turns out badly, they respond with phrases such as “Oh, well.” Or perhaps simply, “Next!”

There is nothing helpful or constructive about being upset about a bad race. On our team we have a rule that you get 5-10 minutes to be disappointed and then you must blow it off and move on. Negative energy does nothing to improve performance in the future and honestly, it sucks to be around. Energy is contagious and it stinks being around people who are upset and negative.  Part of being on a team is the ability to enjoy other people's successes in addition to your own. Maybe you didn't have the day you wanted but chances are a teammate had a killer race. Go give & get some of that energy - it's much more productive that mopping in our room.

9. Resent Other People’s Success. It takes strength of character to feel genuine joy and excitement for other people’s success. Mentally strong people have this ability. They don’t become jealous or resentful when others succeed (although they may take close notes on what the individual did well). They are willing to work hard for their own chances at success, without relying on shortcuts.

This next point is particularly relevant to elite sports. Cross Country skiing is primarily an individual sport and I think part of our team's improvement is the fact that we've thought about how to approach it as if it was a team sport. We do pre-race workouts together, share tips. We are each other's family, friends and teammates on the road. That said, we are competitors too.  For example, there are seven girls on the National team and only two in a sprint relay - only 4 in the 4x5k relay. That means that during these races there are anywhere from 3-5 people sitting out, cheering on the sidelines. while cheering is fun, skiing with a bib on is more fun. The process of being chosen to represent the US for these teams involves beating your teammates and this can be hard. Because we're on the road for months on end we see our teammates at every meal and as European Hotel rooms go, we probably sleep two feet away from them at night.  If you resent them or are overcome with jealousy it is bound to eat you alive; it IS unsustainable.  It's better to train yourself to share their "glory" and think of their success a "Feather in the Cap" for the team as my Grandmother would say.

10. Give Up After Failure. Every failure is a chance to improve. Even the greatest entrepreneurs are willing to admit that their early efforts invariably brought many failures. Mentally strong people are willing to fail again and again, if necessary, as long as the learning experience from every “failure” can bring them closer to their ultimate goals.

Anyone who has been at this will tell you that success doesn't come overnight. While Kikkan often makes winning look easy now it took her ten years to get there and lots of last-page results to end up on the podium. The other night Liz was issued her first FIS Athlete Training bib and I watched as Randy Gibbs reminisced about Liz's first World Cup in Davos years ago.... he said, "After those races did you ever think you'd get that?" (Referring to the bib) As an athlete you must find a way to turn "failure" into motivation. Besides experiencing hardship makes success that much sweeter when it does come.

13. Expect Immediate Results. Whether it’s a workout plan, a nutritional regimen, or starting a business, mentally strong people are “in it for the long haul”. They know better than to expect immediate results. They apply their energy and time in measured doses and they celebrate each milestone and increment of success on the way. They have “staying power.” And they understand that genuine changes take time. Do you have mental strength? Are there elements on this list you need more of?

Not everything will always go your way and turning in results takes time. It's funny because I do think that some people think that I made Vancouver out of the blue. It's true that I was working as a full time coach and hadn't actively been competing with my eyes set on Vancouver. Yet, I had worked as a full time ski coach for APU for six years. I often spent four hours on snow everyday. After coaching my sessions I would meet with my friends for intervals at night and ski on the weekends with my husband. Without knowing it I was training for the Olympics.

Today, on the National team we are asked to reflect and evaluate each performance. Even if we turned in a disastrous performance was there a shimmer of positive? Did you do something well - even if it was simply ski selection or the timing of your breakfast? Results take time whether it's on the World Cup Ski Tracks or getting an A in Chemistry Lab....

The start list for the season's first World Cup is coming out any minute now and by the time you (!) are reading this article there is a good chance that I've already raced.  I sincerely hope that I am able to follow my own advice as it's one thing to write it but it's another to practice it. Thanks for reading and thanks for your support!

Oh - and Happy Thanksgiving to everyone at home back in the US!
Cheers,
Holly :)

Last but not least a song for you all!
Posted by Holly Brooks at 8:08 AM